One Last Ride: Out with the old 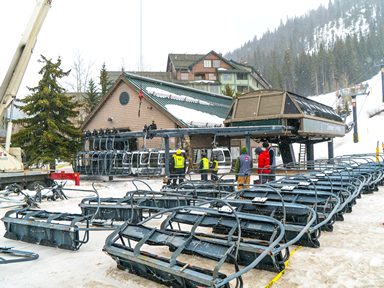 We got out Sunday to take one final ride on the Zephyr Express and we were not the only ones out for a final goodbye ride. The chair’s closing, mixed with great spring conditions and sunshine, brought out an assortment of friends. Like me, many remember when the Zephyr chair went in back in the early 90’s, replacing the “flying couch” triple. It was a pretty big deal back then, and it’s hard to believe that 28 seasons have since passed. The last open air ride on the old lift was nostalgic, especially knowing that, from now on, we will be looking out a window.

The Zephyr served the Mountain well carrying millions and millions of skiers and visitors up and down the mountain.

The Zephyr Express chairlift will be replaced by a new 10-person gondola, part of Winter Park Resort’s $28.2 million in capital improvements for the 2018-2019 winter season. Other additions include the first phase of a complete overhaul of Winter Park’s snowmaking system, increased lift maintenance, snowcats, and 21 acres of logging in Eagle Wind Territory to improve glade skiing.

The new, yet to be named, gondola will increase uphill capacity from 2,600 to 3,600 guests per hour, decreasing wait times by 15 minutes during peak season while “swiftly and comfortably delivering guests to the Lodge at Sunspot” according to Communications Director Steve Hurlbert.

Work began on Monday, with removal of the chairs and will continue through the summer season. The new gondola is expected to be operational in time for the 2018-2019 ski season. The $16 million Leitner-Poma gondola project will feature a cutting-edge energy saving direct drive system, making it environmentally sound as well as efficient. The regulatory approval process for the new gondola is currently underway. The gondola will be Winter Park’s first on-mountain lift installation since the Panoramic Express was added in 2007.

According to Hurlbert, the footprint for the new Gondola will be approximately the same and should not disrupt the summer activities in and around the base area. “The Private Lesson Center, summer programs, and putting course will not be significantly impacted.” The footprint may shift some things around slightly but all the base activities will be open. It will be “business as usual”. “Trestle Bike Park will be 100% open for the summer.”

The biggest change obviously is how riders and guests will get to the top of the mountain. The alternate route includes taking the Gemini Lift from the base and traveling over to the Eskimo Lift to access the bike park. The Olympia Lift will be open 7 days a week beginning July 1, so riders won’t have to come down to the base and can instead make laps on the upper portion of the mountain “where most of the fun stuff is anyway”.

The Resort has chosen to postpone the Colorado Freeride Festival, a signature mountain bike event, for one year, while they go through the renovation process.

As for the lift itself, everything is being recycled. The Resort is giving 20 chairs to the Town of Winter Park, 20 to the Town of Fraser, and the rest are going back to Leitner-Poma to do with as they like. The same with all the mechanical pieces, towers, etc.  The only thing that will remain is the building at the bottom, which will be fitted to become the new gondola base terminal. Disappointingly, the Resort will not be conducting a public sale or auction of the chairs.

After demolition, lift manufacturer Leitner-Poma will be in charge of the new lift installation. Hurlbert said “As you can tell, this process has begun quickly and our goal is to start tower removal in the next couple of weeks. It’s pretty cool, the towers will be removed and slid on the snow down the mountain to the base, hence the urgency to get this done while there’s still snow on the ground.”

Hurlbert went on to say “The Zephyr Express is such an institution at Winter Park that it’s really hard to think of the resort without it.  So many people have so many great memories riding that lift since it was built in 1990, but, as anyone who sat on it while it was stopped for lengths of time can attest, it had long outlived its usefulness. The new 10-person gondola will greatly enhance uphill capacity and be a true jewel of the base area. With an aggressive schedule to get it online before next winter, crews have sprung into action to begin demolition and we’re excited to see the new gondola take shape this summer.”

While the end of an era sadly draws to a close, we look forward to new adventures that will begin with a smooth ride to the top next season.