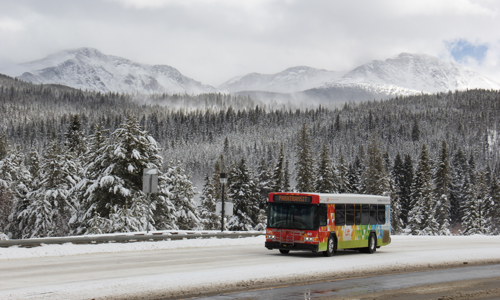 The Winter Park Transit System took another step forward, adding two new full-size busses to their transportation fleet. It seemed like a dream not more than five years ago when discussions began, but these newest additions have finally made it a reality. Laurie Mason, Transit Authority Committee member said, “We have come a long way since the old school buses. It is exciting to look back on the things we have accomplished.”

“A transportation system is the foundation of a resort community, a foundational component of economic growth for the county of the future”, according to Charlie Johnson, Cooper Creek Square.

In our interview, Michael Koch, Transit Manager for the Town of Winter Park said, we were presented the “2017 Colorado Transit Resort Agency of the Year” award by the Colorado Association of Transit Agencies (CASTA) this past fall at their annual conference in Telluride. “It’s an achievement that took a lot of investment and support from Winter Park Town Council to obtain, as well as the participation and feedback from the community.”

The town took over the transportation system in November 2015, investing significant time and money into the old system and upgrading the fleet of busses. Koch said they have a baseline of numbers from previous years to this year and saw a decline in ridership in December and January. “This seems to mirror a similar pattern in lower ski traffic and visitors (presumably due to the late arrival of good snow).” He also stated the system has experienced a ridership increase in February and into March.

The fleet is now 24 full-size busses, which includes the two new additions and 3 cutaway, body on chassis busses (smaller night shuttle vehicles). According to Koch, the average age of the fleet is about 17 years old. And some busses have nearly 1,000,000 miles on them.

Mike Fudge, General Manager of Operations, First Transit, said, “It is not unusual to have that many miles on these buses, they can go well over a million miles before retirement” and added the new buses will go 100,000 before they are broken in properly.

The Town of Winter Park Transit Department applied for and was awarded a CDOT FASTER (Funding Advancements for Surface Transportation and Economic Recovery Act of 2009) grant to help fund the new vehicles. The grant covers the cost for 80% of the vehicles and the Town must pay the remaining 20% as local match. Koch stated that, as a condition of the grant, the town is required to replace two of the oldest vehicles with these two new vehicles.

The two new buses cost about $420,000 each. Koch added, “We originally had been quoted $425,000 for the new vehicles. During pre-fabrication meetings with the manufacturer (Gillig), we were able to replace features available on those buses that wouldn’t be very useful in our environment (i.e. heavy air-conditioning) with features that would enhance the rider experience and create a vehicle better equipped for our operating conditions (i.e. automatic chains, floor heaters, etc).” The changes ultimately led to a decrease of about $4,500 in the total cost of each vehicle. The wraps for the transit buses are about $10,000 for the 35’ buses.

At the celebration, Mayor Lahrman said, “We are talking about the bold initiative envisioned by the Winter Park Town Council and made a reality by the citizens of the Fraser Valley.” He addressed the crowd of locals at the Celebration while popping a cork on the Champagne bottle, adding, “Our transit team has worked hard to bring us a modern transit system, we are very proud of the work they have done to make this happen.”