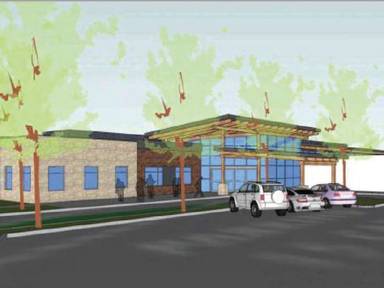 Middle Park Health is positioning to be not only the largest but the best provider of health care services in Grand County, a local health care provider that residents will want to use and feel secure in using. It is doing this not only through the continued expansion of quality and quantity of services, but through an aggressive capital building and facility expansion strategy.

Barely two years ago, Middle Park Health expanded to the far east end of Grand County when they opened their urgent care and family care facility in Winter Park. In the last year alone, they have purchased and transformed the former West Grand Middle School building into a Community Wellness Center. They have taken over management of Cliffview Assisted Living center in Kremmling. They have opened a family practice clinic in Grand Lake.

But just eight years ago, the organization consisted only of the aging hospital and clinic buildings in Kremmling and a small office in a Granby building. This made sense previously, as Middle Park Health, previously known as Middle Park Medical Center, is actually just a DBA, Doing Business As, operating under the Kremmling Memorial Hospital District (KMHD). KMHD is a legal taxing district that goes back to 1973, but which came out of a previously community-supported hospital, purchased from a private practice in 1947. The District collects taxes for operational costs from residents of Kremmling and north Summit County. But over time, that tax support has dropped in proportion to expenses. In the 1990s changes to the Colorado Constitution forced the Hospital District to lower their mill levy. Still, in the early ‘90s taxes continued provided for about 65% of operating costs. But more recent decades have seen the costs of health care and its supporting technology sky-rocket. Less than 20 years later, in 2009, tax revenue provided for under 10% of the District’s budget. And expenses have just continued to rise for health care providers.

In January of 2012, the Hospital District would expand their facilities and their philosophy with the opening of a hospital in Granby. This followed a conscious re-branding as Middle Park Medical Center, to demonstrate the changing focus of its service base. In 2013, they would take over the only functional clinic in Walden, spanning into North Park and Jackson County. Now, the only publicly funded health care provider in Grand County is engaged in three capital building projects that will update, improve, and continue to amplify the ability of the organization to provide for the health and well-being of the community.

Clients, visitors and neighbors to the Kremmling Hospital and clinic will have noticed some bustling activity there since this summer. Offices that had occupied the north building, a building that was constructed in 1933, were moved out and the building stood empty for the first time in over 85 years. Two months of asbestos mitigation has followed, before the structure could finally be taken down safely last Thursday, November 14. And now backfill operations are underway to fill in the former basement and make the ground stable for new construction. All in preparation for a brand new 14,500-foot state-of-the-art facility that will allow the improvement and augmentation of services in Kremmling and throughout the county.

Tiffany Freitag, Director of Community Relations and Medical Staff Coordinator of Middle Park Health, explains that the site will remain dormant for the winter. “We want to allow the soil to be naturally compacted and settled before we begin construction in the spring, as soon as weather allows.” The District unveiled blueprints at the recent Middle Park Medical Foundation’s annual dinner and is excited to now share artistic renderings of the exterior of the planned structure. “It will be a 12 to 15 month endeavor,” she offers, “but one which will really enhance our community.”

“We know that many people in the community have memories associated with the old hospital,” she is quick to emphasize. “Many people are sad to see it go. But we are working to ensure that the new building will continue to provide new memories along with the best patient care that we can provide the Kremmling Community.”

While the demolished building had housed mostly administrative offices for the last 15-plus years, the new structure will provide space for critical hospital, clinic, and ancillary care services. It will include an expanded emergency room with four beds and three in-patient beds for those admitted for additional care. It will have six beds and a new treatment area for clinic patients. It will have an updated registration area and waiting room that will serve the whole facility. Some administrative offices will be returned to Kremmling. And ancillary services, such as radiology, lab, and CT scanning, will be moved from the still-standing 1973 brick building, allowing for future expansion of the long-term residents. “We will be able to extend that part of the structure and remodel in order to make it more homey for those living there,” illustrated Freitag.

A simultaneous project will see the expansion of the 2012 Granby facility. Currently, the co-location of rural clinical services and specialty services in the same building are not meeting the most up-to-date standards of care. Emergency and surgical amenities will be expanded throughout the existing space and with an addition on the US Highway 40 side of the building. A separate clinic and family practice building will be constructed on the opposite side of the structure. It will provide seven exam rooms and a treatment area.

And in October, the organization closed on land near Lion’s Gate Drive in Fraser. This will see construction of a satellite hospital, built in order to better serve the care needs in the east end of the county. Present plans envision a first floor with three trauma bays, three emergency rooms, a triage bay, and two overnight beds for longer care. A second floor will be constructed but not built-out, allowing for possible future expansion of family care, oncology, surgery, or more. Other eventual growth could include changed licensure, permitting for other provision of services and care within our county.

In all, Middle Park Health and Kremmling Memorial Hospital District are committed to providing “in-community care,” stresses Freitag. “Our past CEO believed strongly that people shouldn’t have to travel far from home for care.” And the organization seems to be working hard to minimize that necessity.