Locked in or locked out? 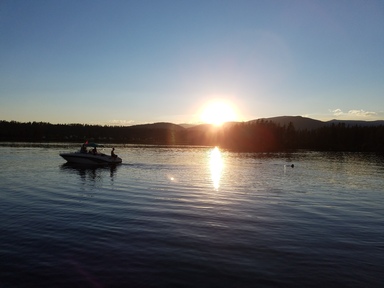 The boat-ramp gates in Grand County are being locked after hours to protect the waters from invasive mussels that may infect our water system when contaminated boats put on without inspection.

According to officials, the measures are designed to close loopholes in the inspection system found by the Bureau of Reclamation after veligers, or larvae of the nuisance mussels, were found in Green Mountain reservoir on the Blue River last August.

Other Western states have been affected by quagga and zebra mussels, but so far Colorado,  which has been working hard to prevent their contamination and spread, has been spared. Once an outbreak begins, it often spreads quickly and can be hard, if not impossible, to stop.  The mussels, when grown, can clog pipes, harm fish and hamper hydroelectric power generation and plumbing systems.

“The Bureau wants to maintain recreation on all the reservoirs and at the same time protect the waters from invasive aquatic nuisance species,” said Jeromy Huntington, District Wildlife Manager for Colorado Parks and Wildlife. “This seems to be the best solution at this point in time.”

Invasive mussels, primarily zebra and quagga mussels native to Eastern Europe, quickly multiply, damage infrastructure and devastate the aquatic ecosystem for native species. These pests have caused billions of dollars in damage in states across the country.

The ongoing spread of non-native mussels in the United States has caused “massive, ecosystem-wide changes” throughout the Great Lakes, some of the planet’s largest freshwater lakes, according to a recent study. And closer to home, Lake Powell has become a warm water oasis for the mussels. Environmental leaders and politicians do not want the species to get a foothold in the infrastructure for the front range water supply.

When the news broke last September of the larvae in the Summit Reservoir, nearly every member of Colorado’s congressional delegation signed a letter to the Trump administration asking for help with the emerging crisis of tiny invasive mussel larvae found in Green Mountain Reservoir.

The delegation wrote to Interior Secretary Ryan Zinke, “We urge you to respond rapidly, deploy available resources and work with the state and local communities to prevent this initial detection from growing into a full infestation,” adding “A rapid response is critical during the window of opportunity immediately after the detection of invasive species.” To date, nothing has been done by the current administration to address the concerns or problems facing our water resources.

The new measures put in place this spring by the Bureau of Reclamation does not sit well with some local boaters who prefer off-hour daily launches and an extended boating season. Keith Sanders, avid fisherman and local business owner, said, “ This new policy will have a negative economic effect on the shoulder seasons and I think it is important to find solutions.”  Many outdoorsman hunt and fish well into November each year. Sanders added, “and most of us want to get on the water as soon as the ice breaks in April.” Sanders and a local group of stakeholders want to find a way to fund the system to meet the needs of everyone.

Mike Evans, fisherman and stakeholder in the group said, “The inspectors are working in tiny shacks that are not a comfortable work environment” adding he would like to see the state and federal entities look at a long term funding solution that meets the needs of the new regulations. “I think we need to find the funding to build permanent facilities that can handle the spring and fall temperatures and provide a better work environment.“

The new closures are said to help protect the waters when the lakes are not manned by inspectors. Rocky Mountain Recreation Company out of California is the contractor responsible for staffing the inspectors at the boat ramps.  Currently, the contract allots for inspection coverage at the local Grand County ramps from mid-May to mid-October, approximately 10-12 hours per day, leaving significant gaps in the operation.

WHAT YOU NEED TO KNOW

The ramp gates are locked at a prescribed time, and if you are not off the lake by the time the gates are closed you are “Locked In” and you will need to come back to retrieve your boat the next day.  If you want to put on before they open, you are “Locked Out” and cannot access the lake until they inspector opens the ramp gate at the set time. The following is a list of local ramp hours of operation.

Sunset Boat Ramp on Lake Granby, Green Ridge on Shadow Mountain and East Inlet on Grand Lake are open 7am -7pm, Monday – Thursday, and, 6am – 8pm Friday, Saturday and Sunday.

Willow Creek is closed to all motorized craft.

It is recommended to check with the inspector each time you launch and/or take out to make sure the schedule has not changed.