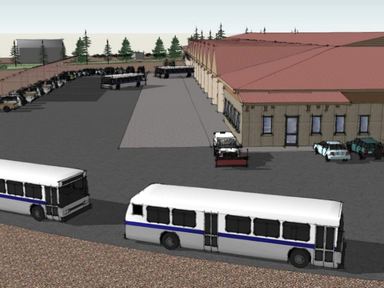 It was only just a few years ago that many residents believed a transit system in Grand County seemed next to impossible. Discussion of a transit route, beyond what was paid for by Winter Park Resort, had been ongoing for years. When the resort pared back its contribution to transit, and Homeowner Associations began pitching in financially to allow continuation of routes that would have been cancelled, the community took notice. Transit options diminished and the future of the once reliable service was in question.

With the growth of the system, it has become clear that the current Transit Facility, located in Old Town Winter Park, can no longer reasonably accommodate the nearly 60 employees and 30+ buses in the fleet. Additionally, buses are stored outdoors, year-round, contributing to a more rapid depreciation of assets. At an estimated $480K for a new bus, it was determined high priority that the Transit System secure a site location and begin construction of a more robust transit operations facility as soon as possible. 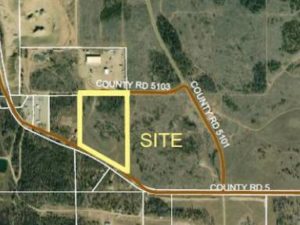 The Town began looking at land suitable to build a proposed facility and had preliminary discussions with Jeff and Tracy Martin, owners of Dog Sled Rides of Winter Park. The Martins purchased their 6 acre property, located at 1410 GCR 5, in 2000. They built their home and their business on the property and had planned to stay there for a very long time. However, since they purchased their property, the county has built a Grand County Road & Bridge maintenance facility just north of them, and, the Mountain Parks Electric substation directly west of their property has expanded about 30%, changing the landscape from country to industrial. The Martins had hoped the Town would offer them fair market value for their property, but when the county offered to share a 12 acre parcel of the 30 acre Road & Bridge maintenance facility site for a nominal sum, discussions with the Martins ended. Coincidentally, the 12 acre county-owned parcel is located directly east of the Martin’s property.

Town Capital Projects Director, Gerry Vernon and Transit Manager, Michael Koch began work on the design of the facility and submitted the Special Use Permit (SUP) application to the county in February 2019. After several public hearings, it was approved by the Planning Commission, with a number of conditions, at the June 12th meeting.

At Tuesday’s meeting, the Board of County Commissioners (BOCC) held a Public Hearing for the Winter Park Lift Operations Center.

Town Attorney Chris Leahy first set the record and then Community Development’s Alex Taft gave an overview of the proposed facility. Taft told the commissioners the original site plan had been modified in an effort to reduce the impact to the neighbors. The design (Option 3) features dense landscaping with trees and shrubs along the western border which are intended to screen and buffer the facility operation from the neighbors to the west.

Town Capital Projects Manager, Gerry Vernon, started off by saying, “Building a facility this size is going to have an impact, no matter where we put it. We tried to mitigate the impact in every way we could. This design takes advantage of the topography and solar gain, with all the buildings facing southwest.”

Chairman Richard Cimino told Vernon that he had spoken with many constituents about the project and found the question asked the most pertained to how the site plans to treat washing the buses.

Vernon told the commissioners that a wash facility would lean toward recycling. He estimated that up to 80% of the water used could be recycled.

During Public Comment, adjacent homeowner, Jeff Martin, gave the commissioners a brief history. “This is our 19th year of living on that property, and there has been significant growth in this time.” He added, “It’s plain to see that this area is becoming more and more industrialized. It  doesn’t seem that a family residence fits in this neighborhood any more.” 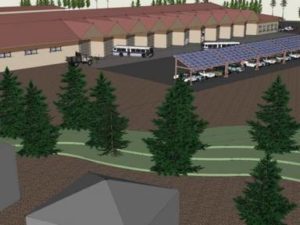 Martin observed that the renderings showed the building closest to his residence would be 30-40‘ tall and a “football field and a half” long. “This building is large and would dominate our view from the eastern side of our house. That’s a concern.” He told the commissioners he was also concerned about what the new facility will do to their property value. “It’s our largest investment currently. If we needed to sell in a pinch, there are a lot of 6 acre properties close to town buyers would find more appealing, as opposed to a home that has a 75K s.f. property next door.” He told them he also had concerns with lighting, water and air quality and the proposed 21 hour operating day.

“So, as a family with children, we don’t think this is an appropriate neighbor for us,” said Martin. He told the commissioners he would not like to see the project move forward at that location, but added, “We understand industrialization. At this point, we are seeking buyers that have interest in potentially developing the property as an industrial site, or any party involved, such as Mountain Parks Electric , the Town of Winter Park, or Grand County.” He said CDOT had been out to take a look at their property, but had not yet heard back from them.

Martin also brought up concerns with an access point to the facility coming off of GCR 5, citing the volume of cement trucks traveling west would be forced to slow down/stop on a blind curve to allow buses to enter the facility. He felt that the facility should be accessed from GCR 5103 and 5101. Lastly, he pointed out that the planned fuel station would be located about 100-150 feet from an existing fuel station at the Road & Bridge facility. “I would recommend not building a second and using the one already on Grand County land.”

Kacie Fitzpatrick, who lives across the road from the proposed site, told the commissioners she understood the need for the facility, but she had concerns with the operation. Fitzpatrick said she had found record of violations with the Environmental Protection Agency for the current facility including late or missing reports. “That’s huge,” said Fitzpatrick. She questioned whether the environmental impact of the new facility would be worth it to the community. She also cited concerns about the long-term effects of diesel and the placement of a second fuel station so close to another.

Several more neighbors shared similar concerns about the fuel station, the EPA violations, access off of GCR 5 and encouraged the commissioners to ensure the Martins are fairly compensated for their property.

Road & Bridge Superintendent, Chris Baer, said, “It’s important that we follow standards and make recommendations for access points.” By looking at the industrial area, he felt it would also be important to have a discussion with neighboring Peak Materials. “We need to look at GCR 5101 and 5103 as the primary access points,” he said, adding, “With the increased traffic (on GCR 5) it’s probably overdue.” Baer also told the commissioners that they order and use off-road red diesel fuel at their facilities. “I am not sure what buses run on, this is something to consider.”

Transit manager, Michael Koch, confirmed the buses use red diesel fuel, but believed the existing fuel station would need to have improvements made to accommodate the added capacity.

Commissioner Kris Manguso said, “I don’t want it to be another Highway 34, they have got to use GCR 5103,” for access.

Vernon said the primary consideration with changing the access to GCR 5103 would be the need for the road to be improved, from gravel to asphalt. They would also need clear signage on GCR 5, so that vendors would be able to find the facility. And, of course, determining where responsibility lies for the road improvements would be a key consideration as well.

“Depending on the lease agreement, you might be in a good position for this,” said Commissioner Manguso.

Chairman Cimino said he would like to add language to the SUP regarding substantial cleaning of the air and water. Commissioner Manguso noted the plans showed the would be installing scrubbers, which remove particulates and gases. “Let’s make it a condition,” she suggested.

Winter Park Town Manager Keith Riesberg stated, “One point on the access is that we’ll have to work through improvements to County Road 5103. With a limited budget for this facility, it could make the project cost prohibitive.”

“In terms of scrubbers on the building, this application is for a land use permit. You are building in conditions that are well down the road,” said manager Riesberg. “In terms of shared fuel, there are opportunities for cost sharing. We recognize that we don’t have those agreements in place. Once they are, we will continue the dialog on this and what our highest needs might be.”

“We want to make this project work,” said Chairman Cimino, adding, “I am hopeful and confident the single access won’t be prohibitive.”

Commissioner Manguso motioned to approve the Special Use Permit, with all conditions requested by the Planning Commission, adding single access from GCR 5103 only, use of air scrubbers and strongly encouraging a single fuel system shared by the county road & bridge and the transit system.

Chairman Cimino discussed the potential for a commissioner to have a seat on the Transit Advisory Committee. County Attorney Chris Leahy had determined there was nothing prohibiting a county commissioner from taking a seat, but he felt it should be something negotiated outside the Special Use Permit.

Manager Riesberg said he did not think it was appropriate to discuss the matter as a condition of the SUP, but conveyed that the town was looking at the way the TAC is structured and could consider the county in an advisory capacity in future discussion.

The commissioners approved the Special Use Permit unanimously.

Following the approval, Attorney Leahy outlined the information he needed to craft a lease agreement between the Town of Winter Park and the County. He asked town representatives for any key points they need included in the contract, such as the term.

Transit Manager Koch stated he was in the process of submitting a grant application to the Federal Transit Administration (FTA). The Regional Director had come up on Monday and they toured the existing facility and discussed how they would use the land as in-kind. While no lease is yet in place, Koch used language indicating support of the lease was in place on the application.

Chairman Cimino added that he would like language added regarding the county having a seat on the TAC.

Commissioner Linke suggested that language regarding the responsibility for paving of GCR 5103 be included as well.

Attorney Leahy said he would contact the Town’s attorney and get started on the lease agreement.