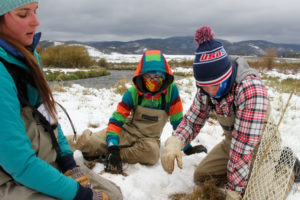 Learning By Doing organizers and a team of volunteers are planting the seeds and stems of restoration on nearly a mile long stretch of the Fraser River upstream of the road to Devils Thumb Ranch. Learn more @ grandcountylearningbydoing.org | Photo courtesy of Trout Unlimited, Jerry Nissen

If you have been in Grand County or even Colorado for any period of time, I am almost positive you have heard something about water, maybe you have seen a bumper sticker or over-heard a conversation or most recently, taken part in an restoration event on the Fraser.

Water has been topic of discussion in the West for decades and in this multi part series we will try to navigate some of the framework of that complex and confusing conversation and set the stage of where we are today.

Like most Rocky Mountain communities, water is the foundation for economy and quality of life. So it’s encouraging that stewardship of Grand County’s water resources has entered a new era. Cooperation is replacing confrontation, and the stakeholders are coming together to find ways to better manage this precious resource. This new approach, Learning By Doing is a cooperative effort that will help ensure Grand County’s streams are protected and remain healthy into the future.

The fight came to a head several years ago when drought conditions and minimal flows landed The Fraser River on top of the Most Endangered Rivers list. There didn’t seem to be any common ground between the empowering entities and their competing interests. Today the tides have turned.  Kirk Klanke, President of Colorado Headwaters Chapter of Trout Unlimited said it best, ”After years of conflict, we’ve learned that we can work together to secure Grand County’s home waters. We have agreements in place to help protect our river and the surrounding habitat.  We look forward to launching this new era of water cooperation.”

The month of May has been the start of a new beginning in cooperation and could create a healthier eco system in a river struggling for life. The Learning By Doing revegitation project volunteers planted hundreds of willow stalks and dozens of cottonwood trees along the banks of the Fraser.

This story is part one of a series of water segments that will look at the history of water over the last century, where we are today and some ideas for the future.

Water in the American Southwest has always been a scarce commodity and in the 12,000 year since the Clovis people, a prehistoric Paleo-Indian culture, dug the first water wells in the region, water has continued to be a topic of concern. The state of Colorado is a headwater state, which means that many rivers in the western and midwestern United States originate in Colorado. The Platte River, the Arkansas River, the Rio Grande River and the Colorado River all have their headwaters in Colorado.  Colorado’s use of these waters has an effect on users downstream. Prior to the creation of the Territory of Colorado in 1861, few laws existed that pertained specifically to the issue of water rights in the area.

When settlers and pioneers first came the area, the common system in the eastern United States for dealing with water was known as riparian water rights. Under this system anyone owning the land through which water ran could use a reasonable amount of water for any purpose as long as it continued downstream and was available for the next land owner. While this system worked well in the east where water was abundant, in the west water was harder to come by.  Farmers and miners required large amounts of water for their professions and began to dig ‘ditches’ or canals to divert water to more convenient locations. This system was known as prior-appropriation water rights, where a certain amount of water could be diverted for ‘beneficial use,’ and these water rights could be sold or transferred separately from the land. The appropriation doctrine was officially adopted in Colorado in 1872 and within 20 years the so-called Colorado Doctrine had been adopted, in whole or part, by most of the states in the Western United States that had an arid climate. 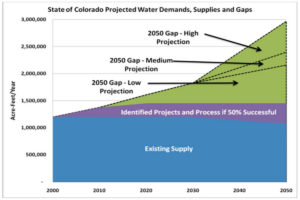 Not Enough to Go Around

At the end of the 19th century many water systems were over-appropriated. Alternating years of droughts and floods created havoc for land owners and rights holders down stream. In 1902 Kansas took Colorado to the Supreme Court over the water usage of the Arkansas River. The federal government weighed in on the case and the Supreme Court ruled that the states and federal government share jurisdiction and each must be treated fairly. Seven states in the region, Colorado, New Mexico, Utah, Wyoming, Nevada, Arizona and California, came together as the League of the Southwest to promote development of the Colorado River. But as more conflicts arose over water rights more lawsuits were filed. In 1922 Herbert Hoover, then Secretary of Commerce, brought representatives from the seven states to Washington, D.C. to negotiate an interstate treaty. This commission, the brainchild of Delphus E. Carpenter, resulted in the Colorado River Compact. The compact allocated water to each of the states, allowing agricultural irrigation, urban development, and large projects such as the Hoover Dam and Lake Powell. More compacts covering other river basins soon followed.

Long before the city of Denver was established, the South Platte River and Cherry Creek were oases for people who traveled the dry Great Plains. These early travelers could do without many things, but not water. That’s why pioneers, and the American Indians before them, camped along the banks of Cherry Creek and the South Platte River. The first residents of the area drank water directly from the creek and river. Surface wells and buckets of water sufficed for a while as a delivery system, but they soon proved inadequate. Irrigation ditches were the next step forward.

It wasn’t long before water companies began offering service to settlers. By the late 1800s, several water companies had fought, collapsed or merged. In 1918, Denver residents voted to buy the Denver Union Water Company and form the municipal agency now known as Denver Water. In doing so, voters created an entity that would operate independently from city government, thereby keeping water service separate from local politics.

On February 26, 1928, traveling between eastern and western Colorado became easier.

The Moffat Tunnel, a 6.2-mile railroad tunnel that passes under the Continental Divide, connecting Gilpin and Grand Counties, opened for business. Colorado dignitaries and local residents gathered at the tunnel’s portals to celebrate. Four special trains passed through the tunnel, marking the completion of the first railroad tunnel to easily connect Denver with the Western Slope.

It took miners five years to dig the tunnel. The work was hard, and sometimes fatal — 28 workers died completing the steel-and-concrete Moffat Tunnel. But its completion cut travel time dramatically. Trains that took five hours to chug over Rollins Pass now sped through the Moffat Tunnel in 12 minutes.

The Moffat Tunnel connected the east and west in another way. Crews constructed a water tunnel through the mountains alongside the railroad tunnel. The tunnel served as a test bore to see what lie beneath the ancient rock and water tunnel intended to supplement Denvers growing population.  In 1936, the Denver Water Board began diverting Western Slope water from the Williams Fork and Fraser Rivers through the Moffat water tunnel.. It was Denver’s first transmountain water diversion, but certainly not its last.

Colorado’s population in July 2016 was estimated by the Census Bureau to be 5.5 million, up  91,726 people or slightly less than 1.7 percent — the seventh-highest growth rate among states for that year. State demographers forecast that Colorado will add plenty of people through 2020, with its population nearing 6 million. If forecasters are correct the population of Denver could double by the year 2050.  Where will the water come from?

Today, Denver Water is the largest and oldest water utility in the state. Its service area covers more than 335 square miles, including the City and County of Denver and several suburban distributors. A system of reservoirs networked by tunnels and canals provides water to more than a million people.  Denver Water has had a remarkable history, full of engineering marvels and plenty of hard work. They have an interesting historical timeline if you want to drill down for a bigger look.

Much of Colorado’s economy is driven by the flow of west slope rivers and streams.. Denver Water holds unused water rights on the Fraser River, which starts atop Berthoud Pass and flows down the western side of the Continental Divide past Winter Park, Fraser, Tabernash and Granby before it joins the Colorado River above Windy Gap Reservoir. Those rights have been a battle ground in the past but recently they have reached out to find ways to create a sustainable river system and still supply a growing demand of users.  But there is another player in our water system and in Part two of this series we will look at Northern Water, the Grand Ditch and the Colorado Big Thompson Water Project.