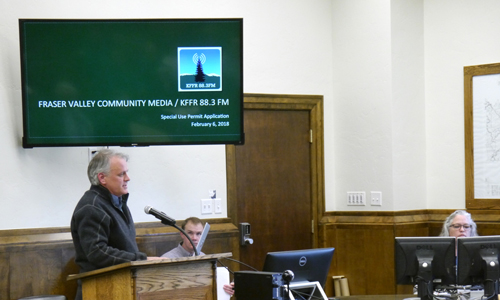 In a unanimous vote on Tuesday, Grand County Board of County Commissioners (BOCC) voted to approve the Special Use Permit for a permanent radio tower to be erected by Fraser Valley Radio in the Batson Tracts Subdivision, located to the north of Tabernash and Devil’s Thumb Ranch. The structure will allow the non-profit to meet requirements of their Federal Communications Commission (FCC) broadcasting license and to stay on the air as KFFR 88.3, Fraser Free Radio. It will further result in an expanded coverage area, through which programming will span East Grand, from Berthoud Pass to Hot Sulphur Springs to Grand Lake.

The decision went against the November guidance of the Grand County Planning Commission, who recommended denial, with opposing members citing concerns about a lack of due diligence with regard to other sites, visual impact, and the potential harms of radio frequency electromagnetic radiation, known as RF. In presenting to the BOCC, applicant Denis Moynihan, founder of Free Valley Radio and owner of the proposed lot, provided additional information to address the concerns, including studies and expert testimony that the RF that will “be emitted from the tower at full power is well below the FCC threshold,” and photos taken during a two-week public demonstration wherein a temporary tower was erected to the proposed final 90-feet.

A packed room also heard public testimony, both in support of and opposing the application. Supportive statements included those from resident Liz McIntyre, who urged the “need for an antidote to social media and an antidote to corporate media,” but who also expressed empathy to the neighbors; and from Steve Skinner, part-time resident and KFFR employee, who summarized, “It seems safe, seems subtle, and it serves.” Opposing statements came mostly from neighboring property owners, like Douglas Smith, who expressed concern over RF and the safety of such towers that can act as “attractive nuisances”; Bruce McCrea and Ryan Lewis, who voiced concerns about due diligence; and Ken McLaughlin, who worried about a negative impact on property values.

In final discussion, Commissioner Richard Cimino stated, “This land is zoned Forestry & Open. One use is a single-family dwelling and you could buy this land and build a house there. You take some risks when you do that. (…) I don’t think this Board has the ability to impose what we subjectively think is residential, even though it’s houses. I don’t see anything in the zoning regulations that outright prohibits this application.”

Commissioner Kris Manguso first acknowledged her divergence from the Planning Commission’s recommendation, expressing, “I do respect the Planning Commission. But if every time something came before us we just rubber-stamped what they did, then we wouldn’t need to be here to make decisions.” She then agreed with Cimino, saying, “If you look at Forestry & Open, there can be a feed yard right next to you. Private property rights go both ways. It’s a double-edged sword.”

BOCC Chair Merrit Linke also noted that the Planning Commission decision was made prior to the publicly-notified visual test and RF studies were completed. “I had a dang hard time seeing the tower in any of those pictures. And a lot of the recurring themes was, ‘It is going to screw up our view.’” He concluded, “The other recurring theme was, ‘We all want this radio station, we just don’t want it in our backyard.’ And I think that that’s not our decision. (…) Why this location seems to work the best is really three things, elevation, access to power, signal coverage. The fourth important criteria is cooperation of the property owner, and that’s a given in this case.”

When asked about next steps, Moynihan responded, “We are very pleased with the decision by the County Commissioners. It’s clear that they put lots of thought and research into the issue and it was shown that there is significant community benefit to be had from a community radio station such as this.” He went on to say that, “At the same time, we take seriously all the concerns of our neighbors and will attempt to mitigate those concerns as best we can.”

He indicated that they would proceed with the initial proposal, meeting the conditions of the permit, raising the mobile tower to 90-feet, and beginning ongoing broadcasting at the full 2,500 watts, expanding the coverage area. When weather conditions improve, construction on the permanent tower will commence, including a 12’ fence to protect from trespassers and a dense screen of mature evergreen trees, to mitigate visual disturbance. Concurrently, a six to eight-month build out of a 1,800-square-foot radio station and community center will take place next to the Murdoch’s in Fraser.

Moynihan invites the public to visit the station’s website at KFFR.org for more information on programming and how to become involved, or to contact through email at info@kffr.org.