Less than two months after its April buying spree rattled the skiing and snowboarding world, Aspen Skiing Company’s acquisition of Intrawest Resorts has hit a snag, as a stockholder of Intrawest has filed a lawsuit challenging the legality of the merger, according to the Aspen Times.

Per the Aspen Times, Intrawest stockholder Edward Hayden filed a lawsuit Friday in the U.S. District Court of Denver. 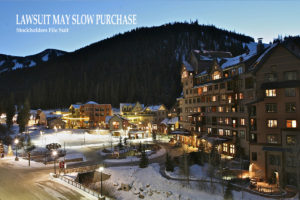 The lawsuit filed by Hayden could throw a wrench in Aspen finalizing its purchase of resorts like Winter park Resort and Steamboat.    Photo: Courtesy Winter Park Lodging Company

The lawsuit claims that Intrawest’s top executives and board of directors “failed to conduct a sufficient and robust review of strategic alternatives” prior to its $1.5 billion sale to Aspen Skiing Co.

In addition to neglecting to perform due diligence on strategic alternatives to accepting the Aspen merger, Hayden claims that top executives at Intrawest provided misleading information to their stockholders to explain why the merger was accepted.

“In particular, the information statement contains materially incomplete information concerning (i) financial projections for the company; and (ii) the valuation analysis performed by the company’s financial advisers, Deutsche Bank Securities Inc. and Moelis & Co., in support of their fairness opinions,” Hayden’s lawsuit reads, according to the Aspen Times.

Aspen (above) went on a huge buying spree in April, snatching up resorts across the United States and Canada. Photo: Courtesy of Daniel Bayer/Aspen Snowmass

“That means instead of stockholders receiving a premium for their shares, as is customary in merger situations, Intrawest stockholders would actually be offering their shares at a discount,” the lawsuit read.

Per the Aspen Times, Aspen Skiing Co. isn’t named in the lawsuit, but rather, Hayden is asking a judge to prohibit the merger from finalizing. Hayden is also requesting that the judge declare his suit a class-action lawsuit, so that other stockholders may join him at a later time in contesting the merger.