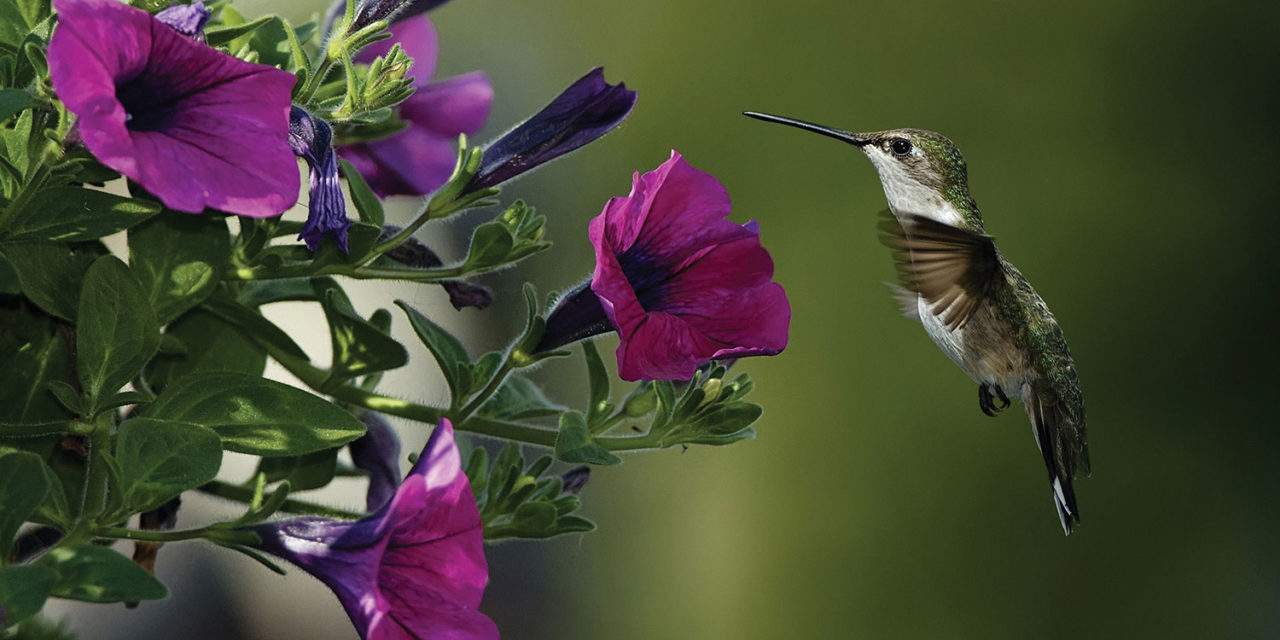 I must admit we went through more than a few pounds of sugar over the years enjoying the feeding frenzy of one of the smallest birds on the planet.  As a young raft guide we use to tell stories of the hummingbirds hitch hiking on the backs of Canadian Geese headed south for the winter but in fact that tale is far from truth. Although it made a great discussion floating the lakes of the Upper Colorado, the tiny birds embark on quite a different journey as they make their way back to Central America and a climate better suited for their metabolism.

Although hummingbird migration is not well documented by large numbers of banding records, we do know a few facts, and we can draw logical inferences about some of the migratory patterns and unknown areas. Here are some fun facts about the Hummingbird.

There are more than 325 unique hummingbird species in the world. Only eight species regularly breed in the United States, though up to two dozen species may visit the country or be reported as regular vagrants. The rest of the hummingbirds are primarily tropical species and do not regularly migrate. They are found in Central and South America as well as throughout the Caribbean.

A hummingbird’s brilliant throat color is not caused by feather pigmentation, but rather by iridescence in the arrangement of the feathers. Light level, moisture, angle of viewing, wear and tear and other factors all influence just how bright and colorful the throat may appear.

Hummingbirds cannot walk or hop, though their feet can be used to scoot sideways while they are perched. These birds have evolved smaller feet to be lighter for more efficient flying. They will use their feet for itching and preening, however!

Hummingbirds have 1,000-1,500 feathers, the fewest number of feathers of any bird species in the world. Not only do they not need as many feathers because of their tiny size, but fewer feathers also keeps them more lightweight for easier flight. 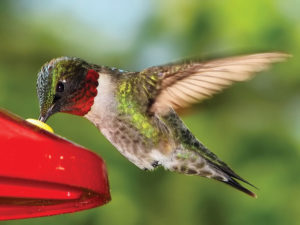 Roughly 25-30 percent of a hummingbird’s weight is in its pectoral muscles. These are the broad chest muscles principally responsible for flight.

Hummingbirds lay the smallest eggs of all birds. Their eggs measure less than 1/2 inch long but may represent as much as 10 percent of the mother’s weight at the time the eggs are laid. A hummingbird egg is smaller than a jelly bean!

A hummingbird must consume approximately 1/2 of its weight in sugar daily, and the average hummingbird feeds 5-8 times per hour. In addition to nectar, these birds also eat many small insects and spiders, and may also sip tree sap or juice from broken fruits.

A hummingbird’s wings beat between 50 and 200 flaps per second depending on the direction of flight, the purpose of their flight and the surrounding air conditions.

At rest, a hummingbird takes an average of 250 breaths per minute. Their breathing pace will increase when they are in flight.

The rufous hummingbird has the longest migration of any hummingbird species. These hummers fly more than 3,000 miles from their nesting grounds in Alaska and Canada to their winter habitat in Mexico.

The ruby-throated hummingbird flies 500 miles nonstop across the Gulf of Mexico during both its spring and fall migrations. It is a myth, however, that these tiny birds “ride” on the back of other birds during migration – they fly this distance completely on their own. 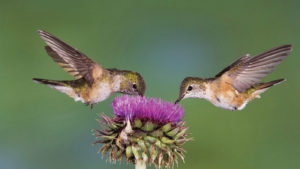 Depending on the species, habitat conditions, predators and other factors, including threats to hummingbirds, the average lifespan of a wild hummingbird is 3-12 years.

Hummingbirds have no sense of smell but have very keen eyesight.

Hummingbirds do not suck nectar through their long bills, they lick it with fringed, forked tongues. Capillary action along the fringe of their tongue helps draw nectar up into their throats so they can swallow.

A hummingbird can lick 10-15 times per second while feeding.

Hummingbirds digest natural sucrose – the sugar found in floral nectar – in 20 minutes with 97 percent efficiency for converting the sugar into energy.

Many hummingbird species, including Anna’s, black-chinned, Allen’s, Costa’s, rufous, calliope and broad-tailed hummingbirds, can breed together to create hybrid species. This is one factor that makes identifying hummingbirds very challenging.

The peak fall migration period for hummingbirds is from mid-July through August or early September, depending on the route and the exact species. Species that nest further north generally begin migration earlier. 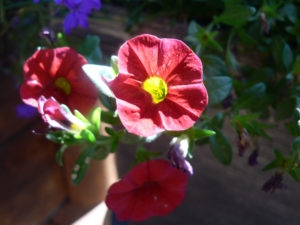 Despite their small size, hummingbirds are one of the most aggressive bird species. They will regularly attack jays, crows and hawks that infringe on their territory. Backyard birders often have one dominant hummingbird that guards all the feeders, chasing intruders away.

The bill of the aptly named sword-billed hummingbird, found in the Andes Mountains, can reach up to 4 inches long, and it can be so heavy that the birds may perch holding their bills straight up. These birds hold the record for the longest bill relative to overall body size of any bird in the world.

Hummingbirds are native species of the New World and are not found outside of the Western Hemisphere except in a few zoos or aviaries. There are no hummingbirds found in Europe, Africa, Asia, Australia or Antarctica.