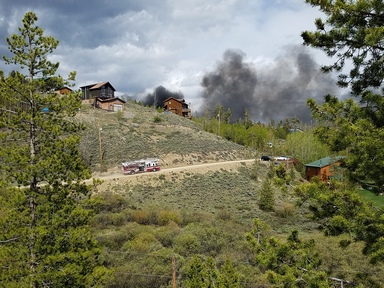 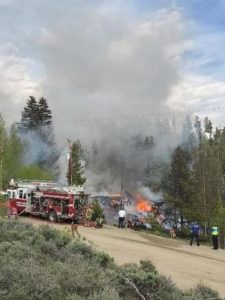 On Tuesday afternoon, at approximately 4 pm, crews from Grand Fire Protection District No. 1 and East Grand Fire Protection District No.4, Grand County EMS and Sheriff’s Office responded to a house fire on CR 851 in Tabernash. By the time crews arrived, the home was completely engulfed in flames and had spread to the detached garage. A vehicle located close to the home also caught fire in the incident.

Windy conditions carried debris into the surrounding valley and fire crews were able to bring the secondary fires under control soon after they arrived at the scene. Emergency crews remained on the scene until the fire was out and the scene had been deemed safe later that evening. The home and garage, as well as a vehicle, are a total loss.

The owners were not home at the time and long time locals Randy and Toni Barrett were devastated by the event. But the most tragic part is they lost their beloved dog, Boomer. He was home alone when the fire broke out. A neighbor spotted the fire and called 911 but the fire was already out of control when he made his way over to check on the home. The family dog along with the assets for their two businesses were lost in the fire. The cause of the fire is under investigation.

A GoFundMe page has been setup to take care of their immediate needs.

Love, prayers and notes are appreciated during this tough time. “We are so grateful they are safe and were not at home at the time of the fire. We are counting our blessings!!!”