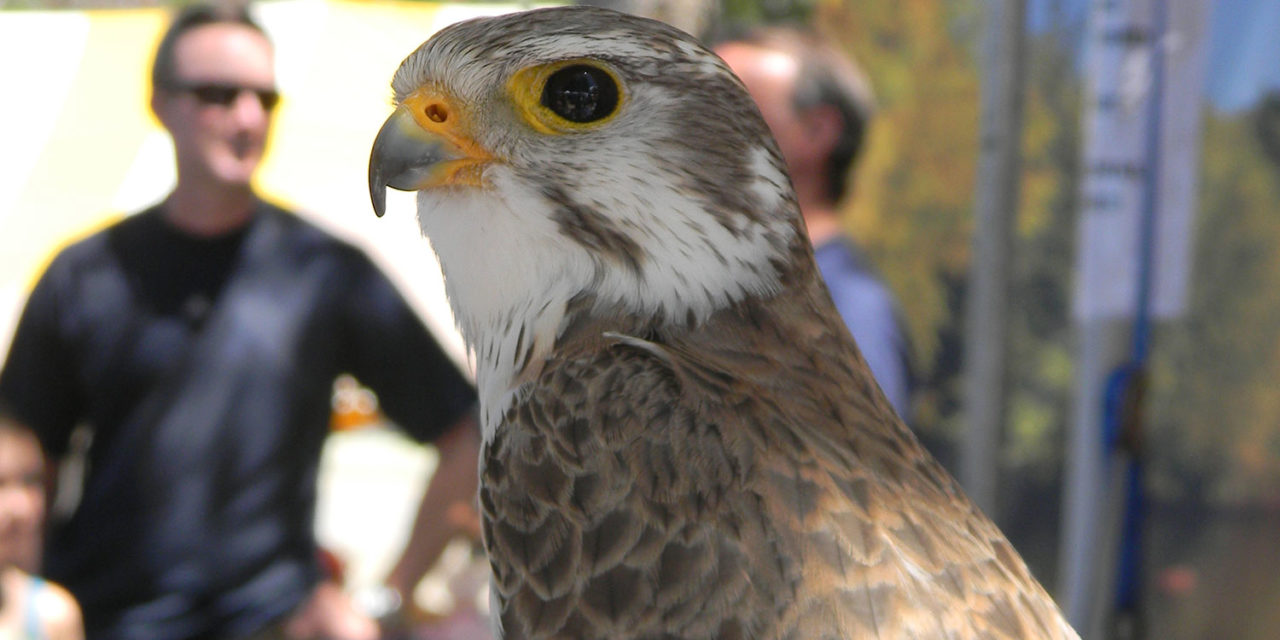 One of my favorite things about a rural agricultural lifestyle is the sights of a soaring Red-Tailed Hawk, a Bald Eagle raising its young or even a Great Horned Owl watching the earth from a lofty perch. Birds of prey are natural to country life, but even rural citizens don’t get many chances to see the wary birds up close. HawkQuest, a non-profit organization near Parker, Colo., is dedicated to educating the public about birds of prey through approximately 600 events and lectures each year that reach about a million people — one of the events being the Winter Park Alpine ArtAffair. 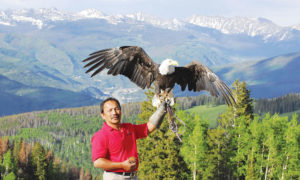 Kin Quitugua, a master falconer and long time environmental educator, founded HawkQuest in 1986. He has trained, handled and flown birds of prey as diverse as the Bald and Golden eagles and the Saw-whet owl. For more than 25 years, Kin has dedicated himself to educating the public about the place of raptors in our ecology.

“We are the largest raptor educational group in the five-state area in terms of number of people seen on an outreach basis,” said Kin Quitugua, the HawkQuest founder who discovered his passion for birds of prey when he was just 9-years-old. “The zoo has people go to them. We go to the people.”

Kin created HawkQuest believing environmental awareness is a key to the survival of the world as we know it, and education – of our nation’s youth in particular – is paramount to this process. He has developed many educational programs such as HawkQuest’s unique Classroom-in-the-Wild. Kin has received national recognition for his work combining educational and ecological concerns, having appeared on both local and national television programs. Kin also serves as a consultant to organizations which promote the welfare of birds of prey.

When Quitugua and his volunteers go to the people, they pack up one or more of their six vans and haul birds to schools or events in order to both educate and impress them with everything from Kestrels and Barn Owls to Peregrine Falcons, Harris Hawks and even Bald Eagles the size of a grown man’s torso. Spreading the word about these amazing creatures is a 24/7 passion for Quitugua. 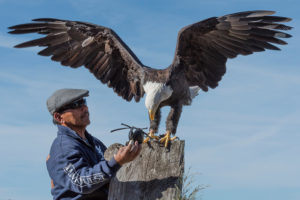 Asked about the importance of birds of prey to agricultural life, Quitugua replied. “What birds of prey do is they eat rodents and insects; Kestrels eat a ton of grasshoppers,” he began on the topic. “Rodents eat a lot of wheat and corn that feeds us. Also the birds keep the balance out there. Predators are very important.”

HawkQuest plays an important role in educating the public about the role played by these extraordinary birds. About 80-percent of HawkQuest’s 600 events are school lectures, and the organization works hard during the year to raise funds necessary to house the birds and continue taking that message to the schools.

“A lot of extra money for outside programs in schools has been cut and there are a lot of schools that just don’t have the money,” described Quitugua, who also noted it costs $35,000 just to feed his winged raptors every year. “Our passion is hanging out with these birds, but second is education. Education is everything,” he continued with conviction. “The young people are going to be running this country and will make decisions that impact their survival.” 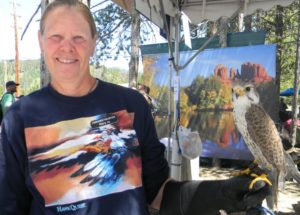 All of the raptors at HawkQuest are non-releasable due to mprinting or injuries.

Stop by the Hawquest Exhibit in Hideaway Park this weekend for a close up look at some magnificent creatures. If you want to learn more or donate to the organization, visit hawkquest.org

Eileen Endres Waldow and Mary Zielke stop by the birds of prey sanctuary booth by HawkQuest — always a good cause and a popular stop at the Alpine ArtAffair each year.

With 36 birds and 18 breeds currently residing in their 40-by-80-foot “Mews,” — an old English word for Hawk House — trained HawkQuest personnel travel the region letting school children and adults know the importance of birds of prey to their everyday lives. Incorporated in 1986 and boasting 48 volunteers, the non-profit is a professional organization with a clear mission statement — “HawkQuest provides an educational opportunity to understand and appreciate the interaction of wild living things in their natural environment and the importance of preserving the world in which they live.”

“First of all, I think it comes down to the idea that we can’t fly,” he revealed about what attracts him to the birds. “Secondly, there is just something about birds of prey. I’ve had parrots and they are cute, but that Golden Eagle (on our grounds) is a hunting machine. That is their job. That is what they are designed to do,” Quitugua added. “For a Peregrine Falcon to come out of the air at 243 miles-per-hour and hit (its prey) going that fast. It is amazing.”

Quitugua buttressed his case by discussing the rabbit infestation of Australia. In a classic example of unintended consequences, within 10 years of about 24 rabbits’ release into the wild in 1859, since there were no natural predators of the species, the rodents became so prevalent that two million could be shot or trapped annually without having any noticeable effect on the population. It was the fastest spread ever recorded of any mammal anywhere in the world. 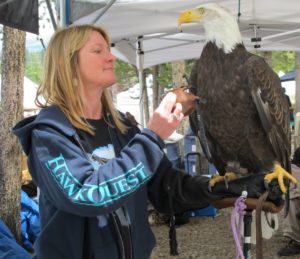 “That’s why we have to keep rodents under control,” he stated about the role birds of prey play in an agricultural environment, where they hunt rabbits, mice, rats and other rodents. “If you can do it naturally — instead of pesticides or herbicides or whatever — it’s even better. That’s why a lot of date companies or even the fruit companies are putting up owl boxes. (The owls) take the rodents that eat the fruit … and you don’t have to spray.”

When the conversation turned to the mountain west’s agriculture of melons, vegetables and vineyards, Quitugua was just as emphatic.

“Absolutely,” he said about whether farmers should be happy to see birds of prey around their crops. “Especially owls. Oftentimes, farmers, when they are tilling their land with their tractors, a lot of raptors will follow them because of all the mice that are being turned up. And all the raptors are eating all the mice. Every bird of prey has a niche,” Quitugua added. “The Kestrels eat a lot of mice and insects. The Golden Eagle can’t catch a mouse, they are too big. But a Kestrel that only weighs five ounces can’t catch a Jackrabbit.”

With such beneficial traits to their presence, how can rural and agricultural communities attract more birds of prey?

It’s very simple,” began Quitugua. “First of all, they can put up nest boxes. They can put them up in old trees. For information on how to do that, they can go online and go to the Denver or National Audubon society; they have all the information you need. People can put up Kestrel boxes, put up Barn Owl boxes. You want to attract them. They are not eating anything else; they are just eating the rodents. And people still shoot them,” he said about the birds while shaking his head. “Which makes me crazy, because you can’t eat them.”