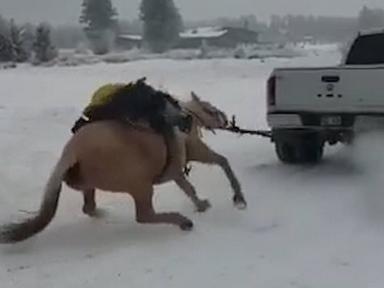 Video posted on Facebook showing a horse tied to the back of a pickup truck and being pulled has sparked outrage across the country. The Grand County Sheriff’s Office has seized the horse, named Trigger, which is at the center of an animal abuse investigation.

The horse’s owners, John Saldate, 59 and Amber Saldate, 33 have both been charged with one count of Animal Cruelty, a class one misdemeanor under Colorado Law. “You make one bad decision sometimes and it can destroy your life,” Amber Saldate told CBS4 Matt Kroschel on Monday. “I’ve lost my job over this, I’ve upset a lot of people. I made our horse go through something that he shouldn’t have. I was wrong.”

The Grand County Sheriff’s office launched an investigation after numerous people contacted them about the video posted Sunday on Facebook. In the video, a horse can be seen tied by its halter to the back of a pickup truck as the truck drives away, pulling the horse for at least 100 yards down the snow-covered road.

“Cases involving kids and animals are obviously very emotional,” said Grand County Sheriff Brett Schroetlin. “We need to do our part of the investigation which sometimes takes a little bit longer than what the community is hoping.”

Trigger is a new addition to the Saldate family. The new owner said the horse gave his past owners problems. “I’m very sorry. I get why people are upset,” Saldate said in the interview. “I was so stupid, I don’t know why we did it.”

Trigger was taken from the home and will be evaluated by animal welfare officers. The couple owns two other horses. Those horses were not seized on Monday.

The defendants are scheduled to appear in County Court in Hot Sulphur Springs, Colorado in late January. “Our phone lines and email accounts are getting covered up with inquiries from people interested in the case.  Because these events are now the subject of an active prosecution, our ethical obligations prohibit us from discussing it, but interested persons can attend the public court proceedings if they choose.” – Matt Karzen, DAs office.