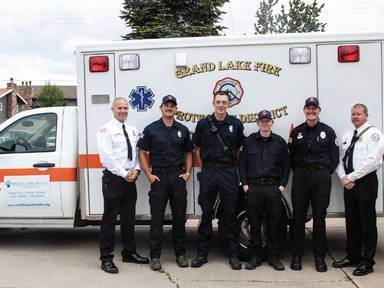 Photo:  Grand Lake Fire Chief Keith Ratzmann (far left) stands with his crew by one of their ambulances. The crew was in attendance at the ribbon cutting ceremonies of the Middle Park Health clinic in Grand Lake. MPH helps fund a shared paramedic position.     Photo by Kim Cameron

The Grand Lake Fire Protection District (GLFPD) moved one step closer this week to being able to provide ambulance transport services, both within and outside of Grand County, when the Board of County Commissioners (BOCC) set aside time to discuss and clarify issues around the Fire District’s recent license application.

The BOCC meeting room was filled on Tuesday afternoon with individuals connected to and concerned about emergency response in Grand County. Attendees and participants included the Commissioners, County Manager and County Attorney, President and Chief of the Grand Lake Fire Protection District, Chief of Grand County Emergency Medical Services, as well as additional board members, staff members, and supporters of all entities. The BOCC had requested the meeting and provided questions in advance to the Fire Protection District. BOCC Chair Rich Cimino conducted the meeting.

Cimino began with questions about the size of the GLFPD Board and its current and future goals as a potential ambulance transport service in Grand Lake and Grand County. After establishing that the GLFPD Board has five seats, four of which are currently filled, Fire District President David Craig indicated that the goal of the Fire District was to “be as responsive as possible to the community.”

Cimino directed specific questions to the applicants about staffing and funding plans for such an ambulance service. Fire Chief Kevin Ratzmann responded to both questions, indicating that the staffing plans were to provide a 24/7/365 response, indicating that the District already has three paramedics, three paramedic firefighters, and three EMT firefighters who could staff such a service. He stressed that his staff are multi-certified, including wildfire and hazard certifications, along with their other medical and fire qualifications. He did acknowledge that special events would require additional staffing, which is being organized, and that a major challenge in attracting and retaining staff is the high cost of living in the county.

The BOCC Chair prodded about the capability of the service, to be told that the Fire District already owns “two ambulances that are fully capable, fully stocked, [Advanced Live Support] ALS capable, and ready to go.” Ratzmann noted that the only difference between their response capability and that of Grand County EMS (GCEMS) is that the County services possess a couple of medication licenses that the Fire District has not yet obtained, though they are working on that now.

Commissioner Merrit Linke asked about the weather competence of the vehicles themselves and Chief Ratzmann responded that the ambulances were purchased from Vail, are 4-wheel drive capable, and have a history of use in a similar mountain environment.

Concern continued to be expressed over how the proposed services would work cooperatively with existing County services. And at one point, County Manager Katherine McIntire asked directly, “Are you looking to continue to do what you’re doing? Are you looking to take over?”

Ratzmann assured, “We want to offer the best services. We don’t want to take over anything. However, if the Commissioners would like us to consider additional responsibilities, our Board is probably willing to consider it.”

As for financial sustainability, Chief Ratzmann assured that the Fire District was not asking for money at this time. He stated that they would charge for any transport services and if, when the County is budgeting for 2020, a percentage could be determined for response by the County and that by Grand Lake Fire, they would only ask for that percentage of reimbursement, and likely through federal PILT funds, or Payment in Lieu of Taxes. For the last few years, 100 percent of PILT funds (nearly $1.2 million in 2018) have been divided on a per-pupil basis between the West and East Grand school districts, but could be allocated to County road and bridge or emergency services, if decided by the BOCC.

Dr. Mark Paulsen, of Middle Park Health, spoke on behalf of the Grand Lake Fire Protection District as well, explaining a shared paramedic position that they are already funding for the Fire District. And when asked about plans to transport to other communities or outside of the county, Craig stated succinctly that “We will look at how to use the license to the best benefit of the community.”

Grand County EMS Chief Ray Jennings and Grand Fire Chief Brad White both spoke, indicating a willingness for collaboration, but some hesitancy about systems processes and procedures. “We’re hoping for good collaborative effort in working with Chief Ratzmann,” said Jennings. “If they arrive on scene first, why not?” He recalled recent incidents in which there were simultaneous calls and where mutual aid efforts were helpful. And White indicated that “As the County grows, probably the best model will be a larger fire and EMS authority, where we’re merging services, rather than creating new ones.” White emphasized, however, that “competition is not what’s needed now. We can adjust and tweak as time goes on.”

The only opposing voice in the discussion was that of Mike Evans of Grand County Search and Rescue, who stated that, after being “on five missions already with the Grand Lake Fire Protection District, while they will be there long before we get there, on those five missions, I see them more as subjects for rescue as opposed to rescuers.” He alluded to Fire Department members not being properly outfitted for Search and Rescue missions, though Chief Ratzmann indicated that those equipment disparities had been remedied. “We dedicate at least three hours a day on Search and Rescue training and now meet National Park Service standards for Search and Rescue.”

In the end, County Attorney Christopher Leahy suggested that he and Manager McIntire head a working group to set up response procedures and address other logistical concerns, such as needed mutual aid and intergovernmental agreements, before moving ahead with the licensing procedure. The recommendation was met with positive response from all, with Ratzmann assuring, “We respect the procedure to attain the license. We are looking for procedures to be in place for mutual aid response.”

Commissioner Cimino, who had admitted to some fear at the license application, said that he appreciated the various perspectives offered. Linke stated, “If we keep in mind that the goal is better service, I think it’s a win.” To which Commissioner Kris Manguso fully agreed.

So for now, current emergency response procedures will remain the same. Grand County EMS is the only emergency transport in the county for the time being. And if Grand Lake Fire is called on-scene they will bring and provide ambulance and life support care, but will wait for GC EMS to transport any patients. A working group or committee will be meeting about procedure and logistics. And Cimino indicated that he looked forward to moving on the license in July.