Last fall, Grand Fire Protection District No. 1 conducted a study of their impact fee levels, as required by state statute and Colorado Supreme Court case law and per an agreement with the Town of Granby. To be completed once every five years, the last study had been performed in 2014. The new study reflects current cost estimates, land use conditions, and growth expectations within the district.

Impact fees are commonly charged by local governments on new development to help pay (in whole or in part) for capital facilities and capital equipment needed to serve growth. The State of Colorado has adopted a standard with the adoption of Senate Bill 15, codified as Section 29-20-104 and 104.5 of the Colorado Revised Statutes following a Colorado Supreme Court Decision. 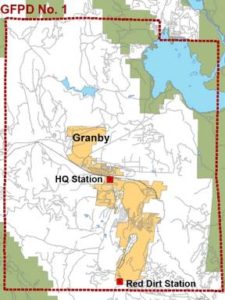 District voters passed a general obligation bond issue in May of 2004, along with a mill levy operating increase. These bond funds provided for the construction of a new headquarters fire station and the purchase of apparatus and firefighting equipment. The District funds its operations with a 4.427 mill levy. In the 2018 election, voters within the district approved an increase in the mill levy, which would be adjusted annually, to offset any revenue losses resulting from property tax valuations and restrictions imposed by the Gallagher Amendment. The maximum increase amount is no more than 6.500 mills.

Grand Fire No. 1’s future capital expenditures may include building construction of a new north station as well as the purchase and replacement of apparatus and equipment. The study, completed by Economic & Planning Systems, Inc., showed that in order to properly fund the District’s capital needs ongoing, the impact fees needed to be revised.

Currently, new residential construction pays $617 in impact fees. The District is requesting a change to $.34 per square foot (sf) for new residential construction. New commercial construction currently pays a rate of $.28 per sf. The study suggested an increase to $1.98 per sf. Finding such a steep increase unfeasible, the District met the recommendation about half-way, proposing a change to $1 per sf in the first year (2019) with incremental increases of $.10 per year to a maximum of $1.40 per sf over the next five years.

Grand Fire Protection District No. 1 provides fire protection, rescue operations, and hazardous materials response to a northeastern portion of Grand County, including the Town of Granby, covering approximately 150 square miles. They have approximately 26 volunteer firefighters and four full-time staff members, with two stations and 12 apparatus. The District has mutual and automatic aid agreements with the four other fire districts in Grand County. The District also, from time to time, deploys wildland engines and/or personnel to regional and national wildland fire or all-hazard incidents which may increase general operating revenues.

On February 26, Grand Fire Chief Brad White presented the proposed impact fee changes to the Granby Board of Trustees. White explained the District has agreements with the town and county to collect the impact fees and they are hoping to amend the agreement with the new fee structure.

Trustee Nick Raible observed, “this is a significant increase in the fee structure”.

Chief White replied, “In 2014, it was revised down due to the recession. Call volume was down”, adding,”In the last 5 years, it has nearly doubled. We are now on the flip side”.

Trustee Natascha O’Flaherty commented, “My concern is that it looks like a tax. I’d like to see it budgeted by mill levy. The town has tried to incent businesses to come to town, but if we hit them up for a large impact fee, we’re hitting them with an unexpected fee”. She added, “When there’s a downturn, that means you’d have nothing to draw from. A mill levy gives you a consistent stream when you’re asking for funding. Is it really something for the board to approve or should we put it to the voters?”.

Chief White offered, “Statistically, we are one of the lower fees”. The impact fees only apply to new construction. Existing businesses and residences that expand beyond the original footprint would pay only for the additional square footage.

After that meeting, Trustee Josh Hardy attended a Grand Fire Board Meeting where he learned more about the results of the study and the reasoning behind the recommended increases.

At the March 26th Board of Trustees meeting, the Trustees opted to wait and see what the Board of County Commissioners did, to ensure consistency in fees in both the town and in unincorporated Grand County.

On April 16, the Board of County Commissioners reviewed the District’s revised impact fees, which the Planning Commission had approved unanimously.

Chief White told the commissioners the fees only apply to new development and construction. He also told them that the Town of Granby wanted to see the county adopt the fees before they voted to adopt them.

Commissioner Manguso said, “I have issues with the commercial fees. We continue to hit business. It’s mind-boggling how much they pay in taxes. If we want to attract small businesses, I am not sure sure raising our small business impact fees is the way to do it”.

Chief White maintained the District’s fees were some of “the cheapest in the state”. He gave examples of Central City at $.96/sf, Durango at $1.92/sf, and, Eagle at $2,200 for residential. White told the commissioners, “In making this decision, we thought hard about this. We spent a lot on the study to make sure we did our due diligence. One of our talks were about the town’s business incentives. For older buildings, there are no impact fees for the footprint, only for additional square footage. A small business probably won’t be affected very much by the fees”.

The commissioners asked about the other neighboring fire districts. White told them that East Grand Fire #4 is just now evaluating their fees, Grand Lake does not currently have impact fees but are starting a study, and Hot Sulphur Springs does not have impact fees.

Commissioner Linke stated, “These fees are based on studies within the districts”. He motioned to approve adoption of the impact fees, commissioner Manguso seconded and the motion passed 2-1, with Chairman Cimino casting a dissenting vote.

At the April 23rd Granby Board of Trustees meeting, Chief White appeared once more and the trustees approved the District’s proposed changes in impact fees in a 6-1 vote, with Trustee O’Flaherty voting against adoption. “I support the impact fees that have been in place. This discourages economic development. It is not something for seven people to decide. This should be put before the voters”, Trustee O’Flaherty told the Winter Park Times.

The Grand Fire Protection District No. 1 impact fee changes take effect in 2019. To learn more about the District and the fees, visit grandfire.org.