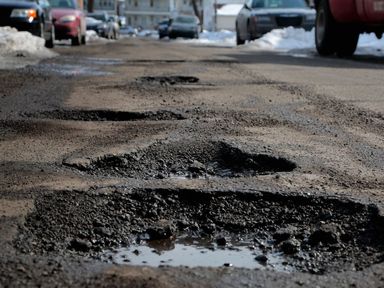 Spring is in the air and with it, potholes have appeared on the roadways across Grand County. Actually, all over Colorado, crews are working hard to stay on top of the annual pothole epidemic. 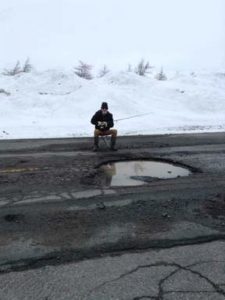 Seem worse this year?  Well it is, and, “it will get worse before it gets better” as crews plan to resurface troubled stretches of Grand County highways this summer.

According to Bob Wilson, Communications Manager for Colorado Department of Transportation (CDOT), a couple of generations ago, we had fewer potholes per mile of road – despite street pavements that weren’t as highly engineered as today.  “Yesteryear’s roads were less travelled, speeds were slower, vehicle weights lower, and there were fewer trucks per capita using our streets”.

These factors are relevant, because a vehicle’s impact on pavement’s pre-existing weaknesses is what triggers potholes. That impact is mostly governed by how fast tires hit the pavement, how much weight is riding on a tire, and how hard the tire is.

Wilson said, “Today’s trucks are heavier, drive faster, and are more abundant than a half-century ago. Modern cars and SUVs are also heavier, have tougher tires, and travel at generally higher speeds. Put these factors together and potholes blossom.”

“Each municipal bus, 18-wheeler, or garbage truck can have a huge impact, maybe as much as a thousand times the impact of a car on the road. FedEx and UPS trucks have about a hundred times a car’s impact.” All of this traffic takes a toll on the roadways and hundreds of thousands of potholes are repaired annually, to the tune of $10 to $25 apiece

But the big kahuna of pothole production is our climate. That’s because our high-elevation weather is dominated by regular oscillations above and below water’s freezing point (32° F).  Our winter and spring days are often warm and sunny – but these warm daytime temps followed by subfreezing nights combine to wreak havoc on our roads. 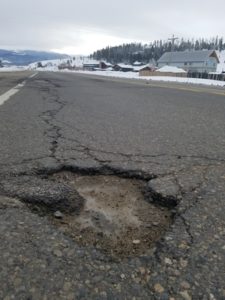 Warm spring days allow water from rain and melted snow to drip down cracks in the pavement and enter soil that underlies the concrete or asphalt.  Once below the pavement, cool nighttime or next-day temperatures cause the water to freeze. Frozen water expands by about 10% – enough for a subsurface puddle to buckle the pavement upward a bit. Once the soil thaws, it slumps back to its original position, but the buckled pavement doesn’t. All it takes is the right whack of a tire to dislodge a chunk of the weakened roadway.

The Fraser Valley has about 30 frost-free days a year and the freeze/thaw effect is pretty tough on the streets, highways and vehicles throughout the year.

While the towns and county work hard to maintain the roads for which they are responsible, it does not include the state highways. Russ Chameroy, Public Works Director for Town of Winter Park, said, “We put about 2500 lbs of material on our town roadways each year”.  Early this week, Chameroy and his crew put about 500 lbs of material on a collection of holes on Highway 40 at Rosie’s Way to help out. “If a vehicle hits a pothole, it can do some significant damage and, we had some leftover material, so it made sense to use it before that hole got worse.”

Potholes are more than just a nuisance. Every year, AAA responds to more than four million calls for flat-tire assistance, many the result of damage caused by potholes. On average, American drivers report paying $300 to repair pothole-related vehicle damage. Depending on the extent of the damage, the make of the vehicle, and the make of the tires, repairs could easily exceed $1000. All told, AAA estimates that pothole damage costs U.S. drivers $3 billion annually.

The team at Fraser Tire and Lube have seen as many as a dozen repairs a day this week.  With a stack of repair invoices on their desk and a line of vehicles at the garage bay, they wanted to throw out a few helpful tips to motorists.

Inspect Tires – Make sure tires are properly inflated and have enough tread. An underinflated or badly worn tire is more likely to suffer damage, or allow the wheel or suspension to be damaged, when hitting a pothole. When checking tire pressures, ensure they are inflated to the manufacturer’s recommended levels.

Inspect Suspension – Make certain struts, shock absorbers and other suspension parts are in good condition. Changes in vehicle handling, excessive vibration or uneven tire wear can indicate damaged or worn components. Have the suspension inspected by a certified technician if you suspect problems. 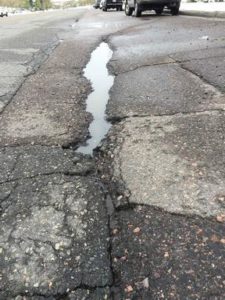 Look Ahead – Make a point of checking the road ahead for potholes. An alert driver may have time to avoid potholes, so it’s important to stay focused on the road and not any distractions inside or outside the vehicle.

Slow Down – If a pothole cannot be avoided, reduce speed safely, being sure to check the rearview mirror before any abrupt braking. Hitting a pothole at higher speeds greatly increases the chance of damage to tires, wheels and suspension components.

Beware of Puddles – A puddle of water can disguise a deep pothole. Use care when driving through puddles and treat them as though they may be hiding potholes.

Check Alignment – Hitting a pothole can knock the wheels out of alignment and affect the steering. If a vehicle pulls to the left or right, have the wheel alignment checked by a certified technician.

Recognize Noises/Vibrations – A hard pothole impact can dislodge wheel weights, damage a tire or wheel, and bend or even break suspension components. Any new or unusual noises or vibrations that appear after hitting a pothole should be inspected immediately.

Where’s the Spare? – New car owners beware, a quick fix for a blown-out tire may be no more, as many newer cars do not have spare tires.

Bob Wilson said, “They inspect and resurface short sections of highway, a mile or less, each summer as needed. Larger sections go out to bid and are typically scheduled 2-3 years out. At the time we spoke, no large engineering projects were scheduled for 2019 but several sections are on the radar over the next few years. “Our crews are keenly aware of the needs of their regions of responsibility.”

CDOT maintenance crews make daily trips along interstates and highways, examining the roads for potholes, debris, guardrail damage and more. When a crew member spots something hazardous in the roadway, he/she will call it in immediately to have an appropriate vehicle or back-up crew come to make necessary repairs.

“We rely a lot on our customers,” said Kyle Lester, CDOT’s director of Highway Maintenance. “While our crews are constantly on the lookout, things can happen right after they pass through an area and that’s when our customers become an extension of CDOT. Our crews are always appreciative to receive calls from customers about potholes or other obstructions in the roadway, because it allows them to address it immediately, before the situation gets worse.” 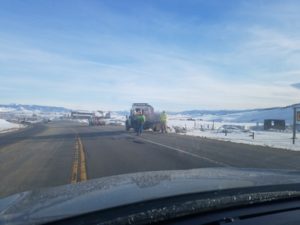 Lester added, “Potholes bother us just as much as they do the public,” saying, “As technology advances, we’ll continue to explore ways to eliminate potholes altogether. But until then, we ask motorists to please work with us and report any potholes you might see so we can address it right away.”

You can report highway maintenance concerns or ask about other CDOT-related topics on the “Contact Us” page: codot.gov/topcontent/contact-cdot.