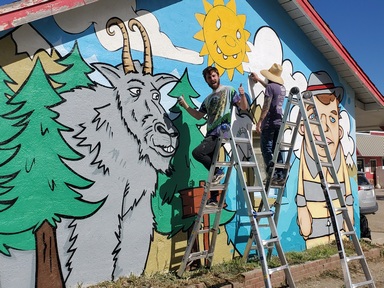 The subject of public art has been a discussion item at Granby’s Board of Trustees’ meetings since completion of the RKY MTN WALLS mural festival in mid-June. The festival brought 16 renowned mural artists to town to create colorful, eye-catching masterpieces on the exterior walls of eight local businesses.

Funded primarily through the town’s Colorado Main Street Program designation and coordinated by the Granby Chamber, a crew of volunteers participated in priming their walls in anticipation of the event. Upon arrival, the artists immediately got to work on their blank canvases, creating art with special meaning to each of them. The results were indeed colorful, activating the growing and changing downtown business district.

During the meetings, some residents came forward, applauding the town for their efforts to bring something different to the downtown corridor. Other residents expressed displeasure with some of the content, finding it not reflective of the town’s personality. Many, including some of the town’s Trustees, felt better communication, criteria and public input should have been established and sought prior to the undertaking. The trustees decided to pursue development of a Public Art Committee in an effort to better align future art projects with the town’s vision.

“What’s done is done and I think we need to move forward,” said Trustee Cathy Tindle.

Town Manager, Aaron Blair, presented a draft Public Art Committee (PAC) ordinance to the trustees for consideration. The document was modeled after the Town of Fraser’s program, but with a few differences. Eligibility for the PAC would not be based upon a members background, education or expertise in the arts. After discussion, the trustees agreed to open it up to any resident with an 80446 zip code. Members of the town’s Public Art Committee would serve a four-year term, and while not set, the committee would be made up of about seven residents, appointed by the Board of Trustees.

Granby resident, Autumn Bishop, had expressed interest in participating in the PAC during the July 9th meeting. She suggested the town not only look at what Fraser has done, but look at other town’s successful art programs, such as the city of Fresno and town of Telluride, to find what works best for Granby.

Mayor Paul Chavoustie noted, “Communication and having public process is the goal of the committee.”

Trustee Nick Raible stated, “I really care what Granby residents have to say. I want to hear from people that live here and consider Granby their home.”

Town Attorney, Nathan Krob, confirmed the ordinance could be amended, similar to any other within the town’s code. With that, the trustees unanimously approved Ordinance 916, establishing a Public Art Committee. Once appointed, the members of the PAC would be able to further refine the ordinance as they determine necessary.

The town will begin accepting letters of interest from residents immediately. To learn more about the program, call (970) 887-2501 or visit townofgranby.com.