At Tuesday night’s Granby Board of Trustees meeting, homeowners in the Granby Ranch Metropolitan District (GRMD) Filings No. 8 & 10 learned that developer, Granby Realty Holdings LLC (GRH), will begin work on several roads that have failed in early June. Constructed less than a decade ago, the road surface and foundations have given way in many places, causing homeowner’s concern for safety and decreased property values.

In May 2018, the GRMD completed a refinancing of the district’s bonds. As part of the refinancing, GRH deposited $550,000 into an account held in escrow by GRMD’s accountant which is to be used solely for the repair of the above mentioned roads. GRH also committed that they, or a subsequent developer, would repair the roads in question by no later than September 30, 2020.

In late 2018, word of a prospective buyer and sale of Granby Ranch was announced, with an anticipated date of sale being February 15, 2019. At the April 23rd Board of Trustees meeting, GRH manager, Marise Cipriani, told the trustees the sale had been postponed, but she had been in contact daily with the buyer. She said the sale looked very promising and that she hoped to have a closing date very soon. At the May 14th meeting, Ms. Cipriani indicated she would be amenable to Mayor Paul Chavoustie and Town Manager Aaron Blair meeting with the buyer after a non-disclosure agreement had been signed.

As for the roads in Filings No. 8 & 10, GRH representatives Lance Badger and Marise Cipriani have provided updates to the trustees on the status of the road repair project during the last few meetings.

On April 9th, Badger told the trustees they had completed the bid process and had selected Denver-based contractors, Concrete Express, Inc (CEI), to perform the repair work and the Headwaters Metropolitan District Board would issue a notice to proceed on receipt of funding. The trustees voiced their concerns with the funding caveat. “How long should the town wait?”, asked trustee Nick Raible. Badger told the trustees he would give an update on funding to them at the next meeting.

On April 23rd, Badger presented an overview to the trustees of how GRH and CEI would tackle the roads project. The scope was broken into three phases: Phase 1a and 1b would be completed in summer 2019; and, Phase 2 would be completed in 2020. On the subject of funding, he deferred to Ms. Cipriani. She told the trustees she was meeting with a lender later that week to discuss options for funding the two phases. The trustees discussed ‘calling the bond’ to get the project moving, but Ms. Cipriani asked them to hold off until she had spoken with the lender. 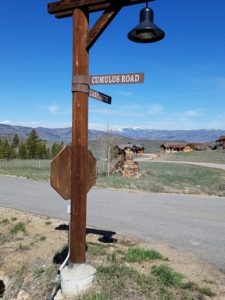 On May 14th, Lance Badger and Marise Cipriani appeared before the trustees once again. Ms. Cipriani told them they had secured enough funding from a lender to address only Phase 1a: the repair of Cumulus Road and the intersection at Lake Drive, estimated to be about 20-25% of the total project. Phase 1a is estimated to cost $750,000, and, with about $419,000 in the escrow account, the lender had approved funding up to the $750K for Phase 1a only. Badger confirmed that work would begin when the roads were dry, in early June.

Ms. Cipriani reminded the trustees that their agreement with GRMD was to finish the road repairs by September 30, 2020. She told the trustees the remainder of the project would be funded by GRH or the buyer and performed next summer. “That is our plan for now”, said Ms. Cipriani.

GRMD president, Matt Girard, told the trustees, “I think the developer is clearly not living up to previous agreements”. He added, “I am not sure the board should continue to go on faith. I ask you to consider an action to protect the taxpayers”. Girard suggested the trustees give the developer a reasonable timeframe to finish and fund Phase 1b or take action. Instead of calling in the bonds, which are inadequate and would require the town to make the repairs, at the taxpayer’s expense, Girard suggested they put a lien against Granby Ranch.

The trustees acknowledged the importance of the road repairs needed and agreed to set a deadline. They unanimously agreed that, if, by the last meeting of the year, on December 10th, the funds were not available to complete the required road repairs by summer 2020, they would either call the bond or attach a lien, whichever option legal counsel determined to be best for the town.

Badger and Ms. Cipriani told the trustees they were committed to achieving the level of funding necessary to complete the projects. “I think you will be satisfied, based on where we are going”, said Badger, adding, “I wouldn’t be here if I didn’t believe the future was bright”.