Granby Board of Trustees updates

At Tuesday night’s meeting, Granby Chamber Executive Director, Jessica Blair, gave an update on activities organized by the chamber. Blair reviewed the previous summer activities which included the move in to the new Visitor’s Center and activation of The Lot. She told the trustees they would be bringing back the weekly Cornhole tournaments, which were very popular, along with weekly alternating Zumba and Yoga classes. They are also planning another Mustang event the weekend of August 9th, with the goal of keeping the aficionados in town for the weekend.

Fresh off creation of the longest mural in Grand County last summer, the Chamber is working with So-Gnar, Inc. on a mural festival to be held the week of June 19 – 26. The event will feature events such as mural design and creation, art and wine tasting.

The Chamber has also submitted an application to Americorps, and, if awarded, they will have 12 volunteers for a period of 6 weeks to assist them with summer activities.

Blair told the trustees that this year’s 3 Lakes Ice Fishing Contest went very well. They had 2,756 anglers registered for this year’s event, plus 40 paid youth registrations and 78 non-paid youth participants, representing 18 states. Over the course of the 3-day event, they weighed a total of 508 fish.

The Kick-off party, held at Indian Peaks Marina, was very successful, selling out early. “We’ll have to move to a larger venue next year”, said Blair. She told them they have also outgrown the Granby Community Center and will relocate to Sun River Run Ranch for next year’s event. 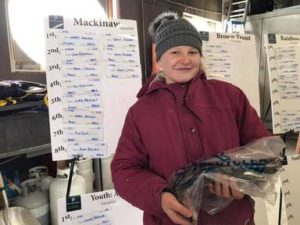 One of the highlights of this year’s event was first time angler, Gabby Rouleau, winning first prize in Mackinaw on Saturday, weighing in at 2.28 pounds. Rouleau caught the fish just an hour after dropping her line in the water and collected a $600 prize for first place.

Blair told the trustees the Chamber is continuing to build relationships with local businesses to partner on future events. “It is better to do these events with other organizations”, allowing the Chamber staff do more. Mayor Paul Chavoustie thanked Blair, adding “We are so fortunate to have you here”.

Town Manager Aaron Blair next presented the trustees with a quarterly update on downtown enhancements.

Blair went over improvements made thus far as well as future improvement plans. Changes in district zoning, improving right-of-way parking within downtown and striping existing lots and side streets all contribute to the downtown development and character, allowing proper downtown development. While parking is abundant, it is not utilized to its full capacity. “Parking lots along Agate Avenue equal ‘missing teeth’ in the downtown development fabric”, said Blair. Recognizing that vacant lots and parking lots make walkability difficult, pedestrian amenities are crucial to future development. Action items include striping crosswalks annually and developing a US 40 corridor plan with CDOT that includes crosswalks, traffic calming and parallel parking, reducing curb cuts and creating a continuous sidewalk. Where possible, expanding the sidewalk and encouraging outdoor dining is another goal, along with improved signage and development of a pedestrian plaza/gathering place at Fourth Street.

Future improvements include curb and gutter along side streets between Zero and Fifth Streets and a public parking lot on Jasper Avenue (long-term, 3-5 years).

Some of the town’s Downtown Development and Urban Fabric action items have been addressed, including development of a zoning code that supports an urban development pattern, implementation of sign code standards reflective of Downtown/Main Street standards, proper screening of trash, parking and storage, evaluation of permitted and special uses in the Central Business (CB) district, site improvements and enhancement of overall character of public spaces/placemaking.

Future goals include creating a bike system along Jasper Avenue and an enhanced connection of the “rail corridor” and Town Hall area to Agate Avenue.

Blair told the trustees he had also been tracking development opportunities in downtown, so that the information is readily available to potential investors and developers. He told them that 8 properties were sold in downtown last year, adding that the ones that hadn’t sold have challenges, requiring significant demolition or were generally unappealing to prospective buyers.

Blair pointed out the area between Fifth Street and Third Street as very active, with 6-7 entertainment/restaurant businesses. Blair told the trustees they will begin to make parking improvements in this area. “A high number of customers need adequate parking access”, said Blair. “The town’s Master Plan defines this as a must do. It’s been budgeted and we’ll work on it this year.”

Upon completion of the presentation, Blair asked the trustees “How do you want me to approach downtown redevelopment from this point forward? Where do we see ourselves?”

Mayor Chavoustie asked, “In a perfect world, what would you want?”

Blair responded, “If we’re gonna do it, let’s get it done”. There is a proper location for uses, and  not everything should be on the main street. “I prefer an aggressive approach.” Blair suggested the town consider land banking and/or lease purchase options, acquiring parcels of land in critical mass that an investor might be interested in developing. Blair told the trustees he had developed a short list of underperforming properties for consideration. The goal would be to acquire the property, clean it up, identify the acceptable use and look for appropriate businesses or developers.

Mayor Pro-Tem Shaw stated, “We’ve got some momentum, we need to keep on going”.

Blair responded, “I agree. There is always a risk and we have to have tolerance and a little bit of gut. To buy a piece of property so that it sells to the business we think it is best suited to gives the town an advantage.”

The trustees agreed to continue discussion on land banking and lease purchase opportunities in future meetings.

In other town news…

The trustees approved Ordinance 906, moving the town’s municipal elections to November. As a result, the current trustees will continue to serve through the next election in November 2020.

The trustees authorized the Town Manager, Aaron Blair, to purchase an administration fleet vehicle, as long as the cost did not exceed the budgeted amount of $36,000.