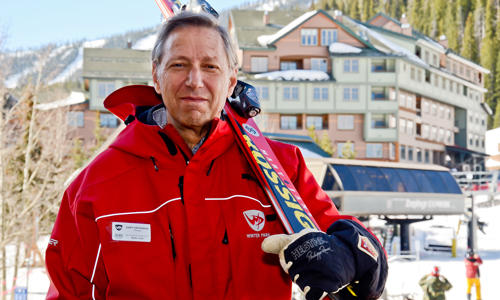 Gary DeFrange was only the third president at Winter Park Resort since it started in 1939, but during his 20 years at the helm, he transformed Winter Park into one of Colorado’s major destination ski resorts.

He was Chairman, President, and CEO of First Interstate Bank of Denver and Area President for a three-state region as his banking career ended when the late Jerry Groswold, President and CEO for Winter Park Recreational Association retired in 1997, and Gary was offered the position.  DeFrange was very familiar with the Resort because in his spare time he was guiding blind skiers for the National Sports Center for the Disabled.

When Gary started, Intrawest was in the early stages of signing on as managing partner, and finding money for capital investments was very difficult, as was cash flow. But DeFrange and his team came up with Colorado’s first low-priced Season Pass, “The Friends and Family 4-Pack,” a model that led to the Ikon Pass and Epic Pass of today. DeFrange said, “We knew the price points were challenging for many families and avid skiers, so the 4 Pack was a great solution at the time.“ The 4 pack was $800 for four unlimited season passes. DeFrange added, “We also wanted to get them when they were still excited to ski”, so, the Resort started marketing and selling the passes in March for the coming year, which, according to DeFrange, “stabilized the cash flow throughout the year”.

He also worked with a team of people appointed by Mayor Wellington Webb to renegotiate the operating contract between the City of Denver and the Winter Park Recreational Association to benefit all parties. This contractual change allowed DeFrange to work with representatives from the City of Denver and Intrawest, one of the largest ski resort developers in the world, to create a Lease and Operating Agreement that would provide a minimum of $2 million each year to the City of Denver, pump an initial $50 million of capital improvements into the ski area for on-mountain and skier services, and allow Intrawest to build a Village at the base of Winter Park Resort.

New high-speed lifts were added, such as the six-passenger Super Gauge and the Panoramic Express, increasing uphill capacity to 38,000 skiers an hour. The resort today has over 500 lodging units and over 47,000 square feet of retail shopping and restaurant space at the base of the mountain.

DeFrange said he was proud they “maintained the culture of a real Colorado resort” through all the changes in his tenure. And, according to Gary, the new leadership is a good fit. “They have the right culture” and, “they know the business. The Alterra Mountain Company are skiers and snowboarders, and, that is exciting!”, said DeFrange.

But perhaps Gary DeFrange’s biggest achievement was building a coalition between several partners and political allies to bring back the train from Denver’s Union Station to Winter Park Resort. The original beloved Ski Train to Winter Park ended in 2009, and DeFrange said ”As I watched the last train head into the tunnel, I knew I had to find a way to bring it back.”

Today, the Winter Park Express is transporting over 500 skiers to Winter Park on weekends and some Fridays. This service now makes Winter Park the only resort in North America where it is possible to take a train from a world class international airport to downtown, and then take a train to a world class ski resort.  DeFrange said, “Little did I know how complicated that was going to be”.

For his 20 years of service transforming Winter Park to one of the largest ski resorts in Colorado, for securing financial success from the resort for the City of Denver, and for reviving the Winter Park Express, Gary DeFrange is worthy of entering the Denver and Colorado Tourism Hall of Fame.

“Gary made a tremendous impact both at Winter Park and within the larger Colorado tourism community during his twenty year resort career.  He built many relationships with public/private partnerships and his indefatigable work with the City and County of Denver, Colorado Ski Country, and the Colorado Tourism Office, among many others, helped elevate Winter Park to the premiere resort destination we know today.  All of his long time colleagues here could not be happier for him and it is a well-deserved honor.”

Gary DeFrange is being inducted into the Denver & Colorado Tourism Hall of Fame on Wednesday, March 13th.  It is an exceptional honor, especially when you look at the previous inductees; most notable: John Denver, Buffalo Bill Cody, Pat Bowlen. Jerry Gart, Governors’ Roy Romer, Bill Owens and Bill Ritter, along with Mayors’ Federico Pena and Wellington Webb.

DeFrange said, “I am honored to be included in the long list of distinguished inductees.

You don’t realize all that is being done or accomplished when in the middle of it.  These awards belong to all the people that worked on the projects. It all came together because we had a great team.”