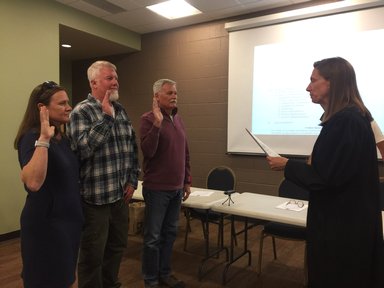 The previous Board of Directors was made of up President John Glancey, Vice President Kimberly Hanna, Member at Large David McKnight, Secretary Roger Hedlund, and Treasurer Rainie Murdoch.

Scott Ledin, Director of Parks, Recreation & Golf stood, thanking both the outgoing and incoming members for their service. He then presented Glancey and Hanna with certificates, shaking hands and hugging the two. Members of the community attending this meeting stood to applaud the two, vocalizing their great appreciation of the Board of Directors and their ability to take both compliments and complaints, and ultimately come together to better serve the community.

Following this ceremony, the formal leadership positions passed unanimously with Hedlund serving as President, McKnight as Vice President, Murdoch as Treasurer, Glancey as Secretary, and White as the Member at Large. Hedlund nodded in acceptance of this proposition, and stated that he is “looking forward to serving the community”.

The meeting’s transition into New Business touched on a recent collaboration between the FVMRD and the Fraser Public Arts Committee (PAC). The PAC serves to expand arts in the Fraser community through the development of a foundation of artists and creative industries throughout Fraser. In accordance with this mission, a new implementation of a 5 foot tall bronze statue has been placed on the grounds of the Grand Park Community Recreation Center. The site of the statue was chosen to be within the gardens of the bus circle, a location clearly seen by those visiting the Rec Center as well as those passing by on Highway 40. This piece of art would be one of four new public art installments around the Town of Fraser.

Additionally, discussion touched on the annual Ride the Rockies event. Ride the Rockies occurs from June 9th-15th. The bikers will be riding through the Fraser/ Winter Park area specifically June 14th, and at this location, the Rec Center is serving as Headquarters. It is approximated that 2000 riders will be passing through. Outdoor camping will be available at Grand Park, shower trucks and luggage trucks will be provided as well. Even with such an event, the Rec Center is going to remain open to the public and the community.

Towards the close of the meeting, Ledin updated the room on the status of the Ice Rink Refrigeration Project. He stated “we did sign a contract with a company called Everything Ice”, the same vendor that initially installed the floor eight years ago when the rink was new to the community in 2010. Initially, two vendors had been up for consideration; however, Everything Ice had a surplus unit due to a cancellation of a different project. This resulted in $10,000 being deducted from the original unit price. Additionally, Everything Ice offered a one year insurance for leaks or additional issues that could possibly arise. Ledin then summarized that “the contract price for the refrigeration equivalent was just shy of $370,000; we were expecting that to be around $400,000”. With this, Ledin concluded “we are in pretty good shape”.

Looking to the future, a timeline for the Ice Rink Refrigeration Project is being established. However, much labor and materials are being donated to the cause, and because of this, Ledin stressed that they want to give their supporters a large construction window because “they are doing this in their free time”. Ledin wrapped up stating, “I know the community is excited”. Newly appointed Board of Directors President Hedlund joined in as well: “This is really good news”.