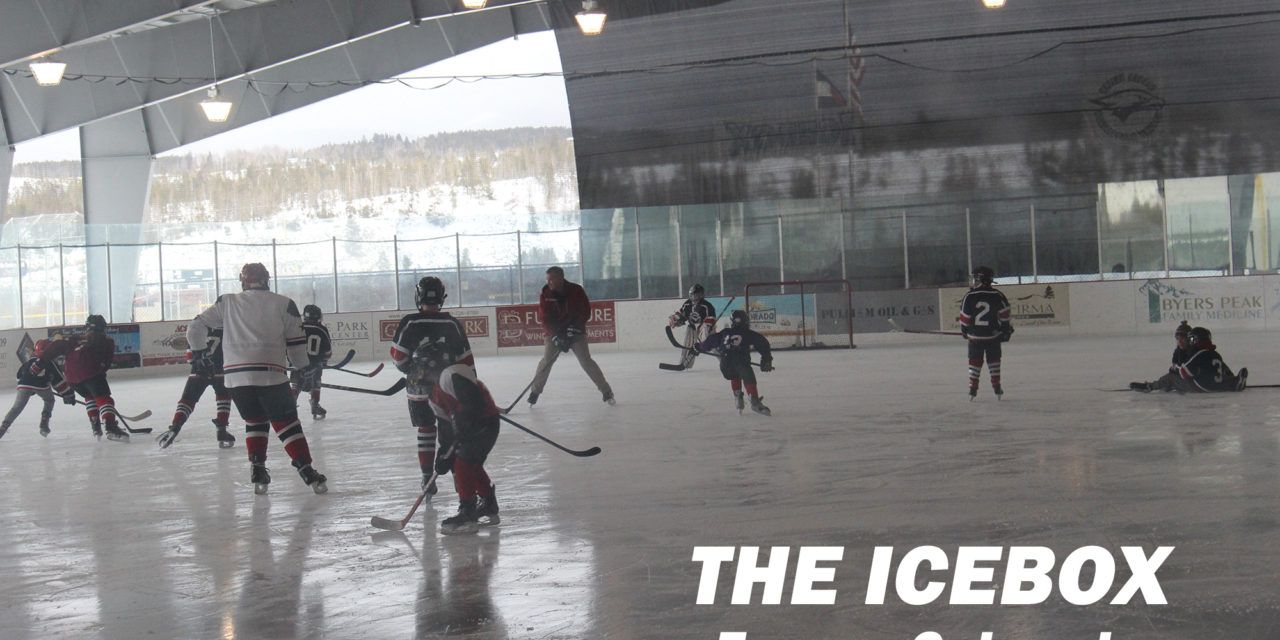 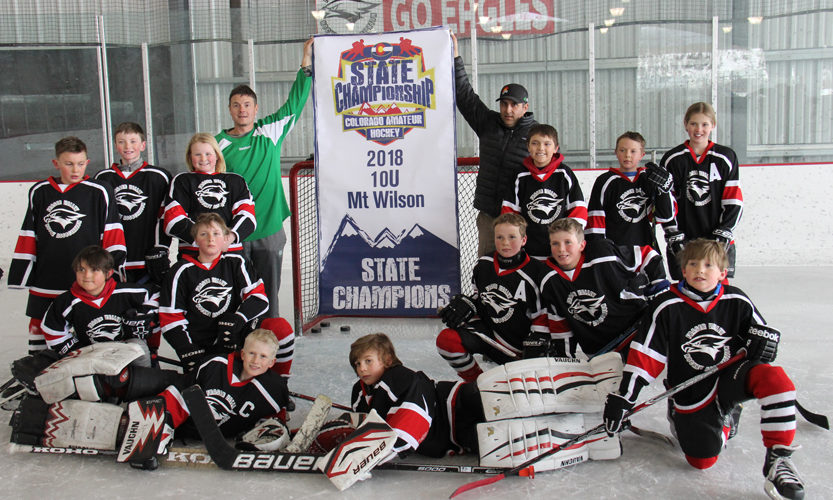 Tuesday evening, the Icebox ice rink in Fraser was bustling with activity. Fresh off the weekend’s State Championship win, proud parents of the “Squirts” hockey team helped the players dress and get on the ice, as their coaches worked to raise two new banners the team had collected in as many weeks up into the facility’s rafters. Just a few weeks before, the team disappointedly achieved “League Runner-up” status from the Colorado Recreational Hockey League, but then came the state Amateur Hockey playoffs and championship, where the Squirts played to victory, with an 8-2 win over Boulder.

At the rink, I spoke with Darren Moon, parent of Squirt player, Kasen. He talked about the season, how the team played and the challenges of being a “hockey parent”. He said that in the season, since the team has nowhere to practice locally, they have to travel to practice at year-round rinks in Steamboat Springs or Lakewood for the first 5-6 weeks of the season, until the ice sets on the Icebox rink.

Recent warm weather led to intermittent rink closures, and again, the team needed to travel to year-round rinks to “get ice time” before the tournament. Moon told me he was surprised how well the team played “against other teams with year-round access to ice”, and, he’s very excited about the upcoming refrigeration project.

When the Icebox complex opened in 2010, it quickly became a popular recreational option for the community. The complex has introduced the sports of ice skating, hockey, and most recently, curling, to new generations, young and old. There is never any “downtime” when the rink is open. At the present time, with the weather-dependent, limited season, it has become increasingly difficult to accommodate the various teams, players and individuals competing for ice time. When completed, the refrigeration project will extend the Icebox’s season between 8-12 weeks.

The refrigeration project is made up of three components: running three-phase power approximately 1,300 feet to the complex, installation of the refrigeration equipment, and, construction of an addition to the existing structure.

Scott Ledin, FVMRD Director of Parks, Recreation & Golf, told me that they are looking for ways to keep project costs down and await an updated proposal from Mountain Parks Electric with pricing options for consideration. He added that the planned addition had been included in the original complex plans, so a lot of the initial groundwork for that component of the project has already been completed. Overall project costs are estimated at $770,000.

In the last three years, Fraser Valley Metropolitan Recreation District, Fraser Valley Recreation Foundation and Fraser Valley Hockey Association have combined forces with the community to raise $720,000 through various funding sources. Sources including $200,000 from the Colorado Department of Local Affairs, $90,000 from the Town of Winter Park, $25,000 from the Town of Fraser, and $35,000 from Grand County. Other donor and grant organizations include the Colorado Amateur Hockey Association, the Grand Foundation, Fraser River Valley Lions Club and other private and local entities. A number of individuals and local companies have also volunteered their time and services to help with the project, and, private donors have recently pledged $10,000 and $50,000 to the project, narrowing the funding gap to $50,000.

Ledin admits one of the challenges will be to find the best way to recognize those that have been involved in this “grass roots” funding initiative.

The plan is to break ground in the spring and they hope to have the project completed by the end of September, in time for the 2018-2019 season. Reliable ice conditions will allow the facility to expand their services, host more tournaments and events and create an economic driver for the community. To contribute to the project or learn more, log-on to: fraservalleyrec.org