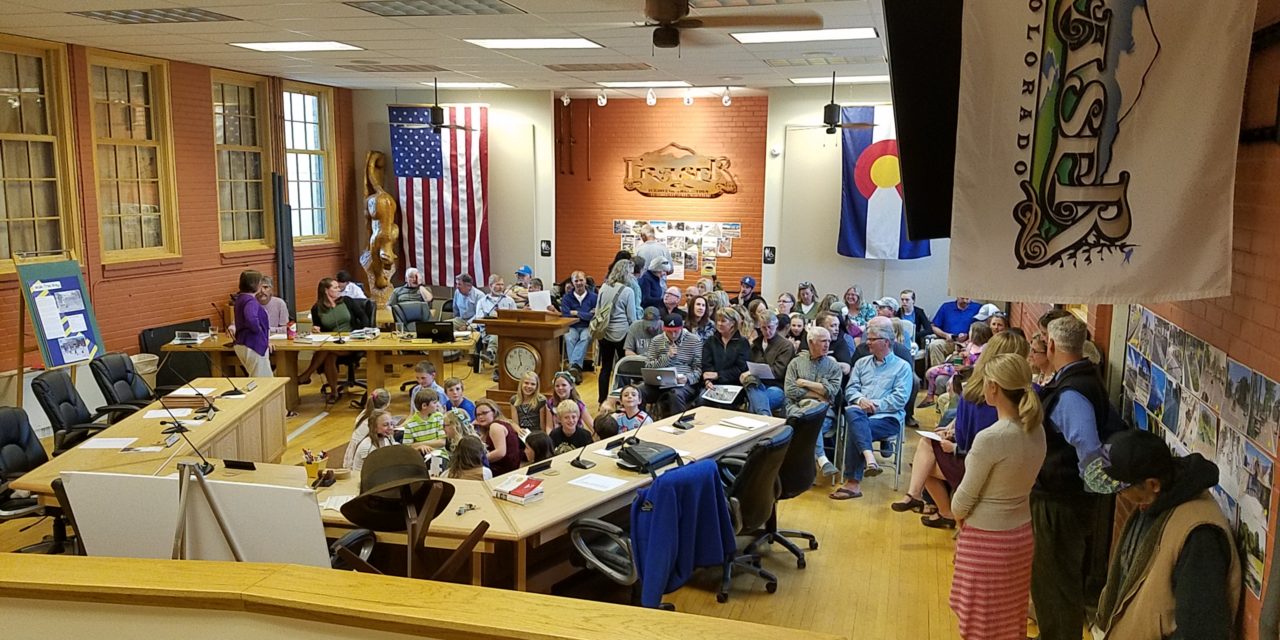 At Wednesday night’s Board of Trustees meeting, Town Planner, Catherine Trotter, gave background on the Town’s Strategic Plan for the historic downtown district, which runs from Safeway to CR 8. The process began in the fall of 2016 and provided several opportunities for community engagement. Through the process, the town identified key items such as improved safety of US 40 and making the downtown more vibrant to be most important. With that, the Strategic Plan was adopted and grants for funding were submitted.

The Town received $350,000 from CDOT for Safe Routes for Schools (crosswalks) and another $432,000 from CDOT for placement of medians. The town consolidated the grant funds under an IGA to more easily manage the project.

When applying for the Safe Routes for Schools grant from CDOT, Trotter told the Board that  Fraser Valley Elementary School leaders were instrumental in collecting data and providing information on how students got to and from school.

Cindy Rimmer’s fourth grade students then presented the results of a project they’d worked on during the school year. The students described how they went about the project and came to the determination that school Parking Lot safety was the area that most needed their attention. They found that adding crosswalks and signage would improve safety and help cut down frustration in the drop-off lane at the school. They went through the list of materials needed, the associated costs and distributed a flyer to all in attendance. Ms. Rimmer told the Board that the “project has been amazing”, that all voices are important and valued and she thanked the Board for their time and support.

Trustee Andy Miller opened discussion regarding the Pedestrian Safety Improvement Project. He  said the effort was started a few years ago and the goal was to make Fraser more walkable and invitable. “We’ve held open houses seeking input many times” said Miller. CDOT dictates speed limit, based on average speeds, so the town does not have the ability to reduce the speed limit.  “The goal of the project is to alert drivers that they’re entering a town. We don’t want to confuse the driver, but make them aware.”

Miller acknowledged that US 40 is a challenging road to cross in Fraser. He said the current pedestrian bollards are moved on and off the road during winter to accommodate plowing, so they’re not always alerting drivers of the crossings. He also noted that drivers are not always stopping for pedestrians in the crosswalk. The project’s design is intended to slow traffic and make the roads more pedestrian friendly. He also reminded the crowd that, many years ago, a bypass was discussed, but routing traffic away from towns is not desirable.

Trustee Herb Meyring said he believed that most of the pedestrian traffic is along the river, and not on US 40. He said he was not opposed to placing medians at both ends of town, but did not feel placement in the middle of town was necessary.

Trustee Parnell Quinn said he agreed with Miller and asked the crowd opposing the project “Which one of the children’s lives are you willing to risk or lose while crossing US 40?”.

Trustee Eileen Waldow stated she’d been concerned with the intersection of Eisenhower and US 40 for six years and felt the median placement on US 40 would make it worse. Waldow wanted to consider looking at other design options such as more clearly marked lines on the road.

Trotter stated that medians provide huge safety benefits, noting that drivers currently do all sorts of willy-nilly things now, without direction. She said she was uncertain what would happen to the funding if the design is modified at this time. She stated that it’s not only pedestrian safety, but vehicular accidents are of concern as well, and the crux of the problem is the intersection at Eisenhower.

The floor was opened to public comment and a number of local business owners and residents spoke to the Board about their concerns with or support for the project. A local business owner asked “How did we end up with a single option? With expressed opposition, the town has a responsibility to say no to CDOT on the design.” A resident described the current road as giving “an impression of a K-Mart parking lot” and looks forward to seeing something done. Another stated that he was a big believer in infrastructure and felt the project would be an improvement, but asked why there wasn’t a stoplight at Eisenhower.

Kim Hannah, owner of the Fraser Quick Stop had collected 433 signatures in opposition of the project and presented copies to the Board. Hannah said “the Quik Stop is a hub and no one I have spoken with has said they are in favor of the medians”.  She said she had contacted CDOT and they had told her they’re not raising the speed limit and the project was being driven by the town. She said she supports safer crosswalks and that CDOT told her the town could separate the two grants. “It will affect my business in a huge way,” stated Hannah. “When access is blocked and it makes it difficult to get in and out, people will not come. This project will not improve pedestrian traffic as much as it will impact my business.”

Barry Young, owner of the new distillery in downtown Fraser, stated “As a resident and business owner, residents want to be able to walk and ride their bikes downtown.” He observed that people are not driving 35 mph and said it is “terrifying” to cross US 40. He went on to say “As an EDAC member, looking at what other businesses have done in town, I see a vision of a vibrant, walkable downtown in Fraser with art, shops, bars and restaurants. I feel we are at the cusp of major investments in our town and we need people other than residents come to our town. The downtown plan is exciting and this is the first step. It’s important that we don’t stumble on this first step. This will be very helpful for businesses in our town. I would like to see people come and park and walk. We can’t widen the streets, but we can be a walkable town.”

Other residents in support of the project said it would improve the town’s appearance and could make it more charming, and also talked about the alternate routes available to avoid the intersection altogether. Matt Stefanski of Fraser described the intersection as a “Mad Max car chase” at 8 am. Stefanski, who patrols at Winter Park Resort in winter, said that “the only way to slow people down is a physical barrier”, and, “if we don’t do this now, we’ll be talking about it again in five years”.

Martin Carmody of Fraser told the Board that he was adamantly opposed to what’s been going on. He said he “cannot support it if it causes a hardship to even one business”. He suggested installing flashing signs warning drivers to slow down as they come into town, to “try a simple solution first”. One resident felt the whole project was based upon speculation with no guarantees the town’s vision would be realized and preferred the town develop organically. He described the number of accidents in the area as statistically insignificant and even if there were more, they would still be insignificant.

Town Clerk Antoinette McVeigh next read five letters from Fraser residents and business owners who were unable to attend the meeting, all in support of the project.

After the public comment was closed, the Board discussed their positions on the project.

Trustee Meyring said he supported beautifying the town by placing medians at each end to make it more attractive and they could deal with Eisenhower at a later time.

Trustee Waldow said she agreed with Meyring on the medians, but felt that crosswalks are still an issue.

Trustee Ryan Barwick said he shares a lot of mixed emotions and understands the fear, but “Eisenhower is the crux of the issue”. He said, “If it’s not addressed, you’re pushing the problem”. As for crosswalk improvement, the only way to do it is with an island or median. To allow growth to occur, there will be added traffic, and Eisenhower must be addressed soon.

Trustee Katie Soles said she has had a hard time with the proposed long median from Byers to Eisenhower, but noted that “every time I make a turn onto Eisenhower, I always hope that someone doesn’t hit me”. She said the “times are changing, and I support this project. It will make Fraser more appealing”.

Trustee Waldow added that “Promoting businesses is always important and this does not seem to support several. I don’t understand what CDOT’s stance is on this and I’d like to know what they have to say.”

Trustee Parnell Quinn, who lives close to US 40, stated that ”near misses are just lucky”. He added, “I think this will improve business. It makes it clearer and more people will pass the businesses that have expressed concern”.

Trustee Andy Miller said it’s important to keep the projects together as CDOT does not respond well to confusion and we could lose the grant altogether. We’ve been working on this a long time and “the rubber hits the left lane”. He went on to say “You’re not going to make everyone happy. I think the less confusion at that corner is going to make it better.” He suggested the Town look at making improvements to one of the medians set by the Fraser Quick Stop to improve accessibility. He observed that “The medians allow drivers to only turn left at street crossings, just like Steamboat. This happens when a community gets busier.”

Mayor Phillip Vandernail told the Board that “Delaying this is not going to do any good. Let’s put this to a vote.”

Trustee Miller motioned to pass the Pedestrian Safety Improvement Project and put the project out to bid. Trustee Quinn seconded the motion and the motion was passed, with Trustees Waldow and Meyring voting against the project.