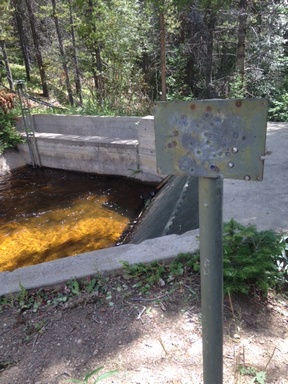 On August 31st, 2019, at approximately 1:49 pm, members of the Grand County Sheriff’s Office, Grand County EMS, East Grand Fire Department, and the Fraser Winter Park Police Department responded to the canal adjacent to USFS Road 128 (also known as the Denver Water Board Road), just east of the Lakota Subdivision on a report of a female party with numerous injuries who had been found in the canal. When the first responding officer arrived on scene, he found a second male victim unresponsive in the water, approximately 200 yards north of where the female was found. Both victims were transported by medical helicopter to St. Anthony’s Hospital in critical condition.

A preliminary investigation suggests that both victims may have been swimming in the canal near the entrance to an aqueduct pipe. Both appeared to have intentionally bypassed a metal grate over the aqueduct, and then traveled through it approximately 100 yards to where it dumps out into the lower canal. Evidence at the scene indicated that the consumption of alcohol was a contributing factor to the accident. The victims have been identified as Tiana Ramos, age 20 of Fraser, and Duante Manuel, Age 22, also of Fraser. They remain in Intensive Care at St. Anthony’s Hospital in Lakewood with numerous injuries.

It may or may not have helped in this situation but the signage warning of the hazard has been subjected to  weather and abuse.