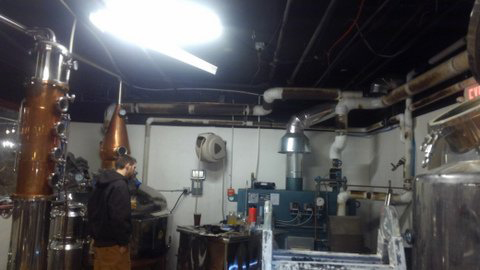 On January 4, 2018 at 12:14, East Grand Fire responded to a fire sprinkler water flow alarm at 78737 US 40, commonly known as Park Plaza, with Engine 481 and Ladder Tower 491.  Light smoke was coming from the lower level of the structure near the Idlewild Spirits Distillery and Restaurant.
Mutual Aid from Grand Fire for an Engine was requested.  Fraser/Winter Park PD was asked to evacuate the upper level of the building which includes restaurants and shops.
While investigating, we found the fire sprinkler system had been activated and confirmed the fire was extinguished. The water for the fire sprinkler system was shut down and utilities were turned off in the room of origin.
It appears that the dedicated steam boiler that heats the still failed and caused a fire/explosion in the room where the boiler was located which activated 4 sprinklers heads from the heat of the fire. Damage to the room and equipment was light.  An engineer verified there was nothing compromised in the structure and no damage to any of the businesses above the fire or in the rest of the building.  All reopened within about 30 minutes of the alarm.  The business owner was on scene and the space turned back over to him.
The Park Plaza is actually a series of structures that gradually grew together to appear as one building beginning prior to 1976.  Numerous remodels and infills have resulted in a 2 level strip mall type of occupancy that provides a difficult fire protection problem for our Firefighters.
Following a change of use for a portion of the lower level of the north end of Park Plaza a fire sprinkler system was installed for that area.  The system has been extended since then but at this point still only provides partial building coverage.  We are encouraging the owner to continuing with this upgrade to building safety as resources allow.
The fire sprinklers took a fire and explosion that would have seriously damaged the building and turned it into pretty much a cleanup operation below with no effect on the businesses surrounding the Distillery.  We understand that the Idlewild Distillery was open for dinner that evening as well!