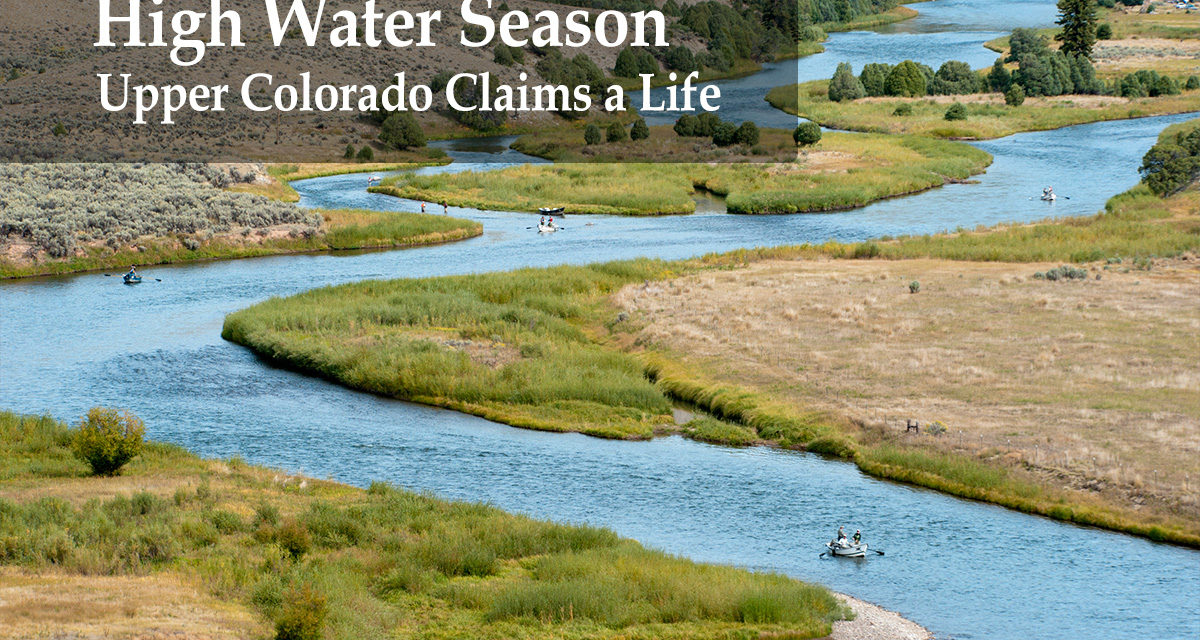 The Upper Colorado’s first river fatality of the season on June 5th serves as a reminder of the constant necessity for safety in the outdoors, how nature is ultimately stronger than man, and the amazing way in which our communities come together in those unfortunate  cases of emergency. Monday afternoon, emergency responders from Grand and Eagle counties were called to the site of a boating accident in the Boneyard Rapid above Rancho del Rio. The remote area falls on the county line and Eagle County Dispatch and Sheriff’s Office were quick to involve Grand County. Both Sheriff’s Offices responded along with Grand County EMS, Search and Rescue, Eagle Fire Department, and Vail Mountain Rescue. The Bureau of Land Management (BLM), who maintains river rangers in the high-use area also responded. Flight-for-Life was aware of the situation and the Burlington Northern Railroad was early on-scene, helping to transport emergency personnel into the canyon area.

The raft, one of several watercraft on the private trip of mostly Edward-area locals, became caught in a current and then, according to witness testimony taken by Lieutenant Dan Mayer of Grand County, “taco’d or wrapped itself around” an obstacle formed by a previously abandoned fishing boat. While four passengers were able to swim to safety, 32 year old Elyssa McCreight a Vail resident, became trapped underwater. All passengers were wearing personal floatation devices, aka life-vests or PFDs, and were aware of the rapid conditions. Another passenger thrown from the raft reported that the “current was so strong it ripped everything off of him, including his PFD.”

Mayer praises the quick and cooperative response to such an isolated area, saying, “These places are so remote that not one agency can handle the whole thing in the case of emergency. Everyone pitched in yesterday to ensure the best possible outcome.” He further reports that the two Sheriff’s departments had already been in communication in just the last few weeks about “mutual aid needs along the Trough Road and Colorado River.”

The need for both personal and coordinated emergency preparedness continues to increase as usage in the area expands. In particular, the river section between Pump House Recreation Area and State Bridge grows in popularity due to its easy access, the recent addition of a designed water park, and the lack of permitting. Whereas many other popular whitewater sections require the purchase of a permit– meaning direct contact with a government agency that will also offer safety information– anyone who pays the $5 day-use fee at a self-pay station, can recreate on the Upper Colorado.

According to David Boyd, Public Affairs Specialist of Northwest Colorado BLM, current estimates are that about 90,000 people use this stretch of river every season. The high use has even prompted an updated management plan for the area known as the Upper Colorado River Special Recreation Management Area and managed by the BLM Kremmling Field Office. Public comment was taken this past spring and a draft plan should be released in the next year. Efforts to address river safety are not new. American Whitewater, a national organization of river stewardship, has published a Safety Code since 1959 in the hopes of minimizing risks of whitewater recreation. Their website at AmericanWhitewater.org offers a long list of guidelines for personal and group preparedness and responsibility, boat and equipment preparedness, and emergency rescue. Among these guidelines are recommendations to always wear a PFD and fitted helmet; ensure all equipment is in good repair; be aware of river conditions and boating skill level; be a competent swimmer and trained in rescue skills, CPR, and first aid. The above recommendations are echoed by Boyd, who adds that river recreators should also be aware of the state’s drug and alcohol regulations which apply to operators of all vessels, including those “watercraft operated by motor, wind, paddle and oar.”  Colorado Parks and Wildlife regulates all boater safety in the state, and he encourages all boaters to familiarize themselves all rules and regulations to be found at cpw.state.co.us.

Dan Smith of Vail Mountain Rescue goes even further in his admonition of personal awareness and safety. For those wishing to improve their skills on the river, he says that river safety courses are available through Colorado Mountain College and often offered through sporting-good stores specializing in water sports. “But,” he says that “the right answer to river safety is to either be really good and only go with really good people or go with a guide.” Smith added, “There is an inherent risk in all outdoor activities such as river rafting and nothing can ensure against tragic accidents. Recreators much recognize and accept that risk– and they should go with a professional guide.”