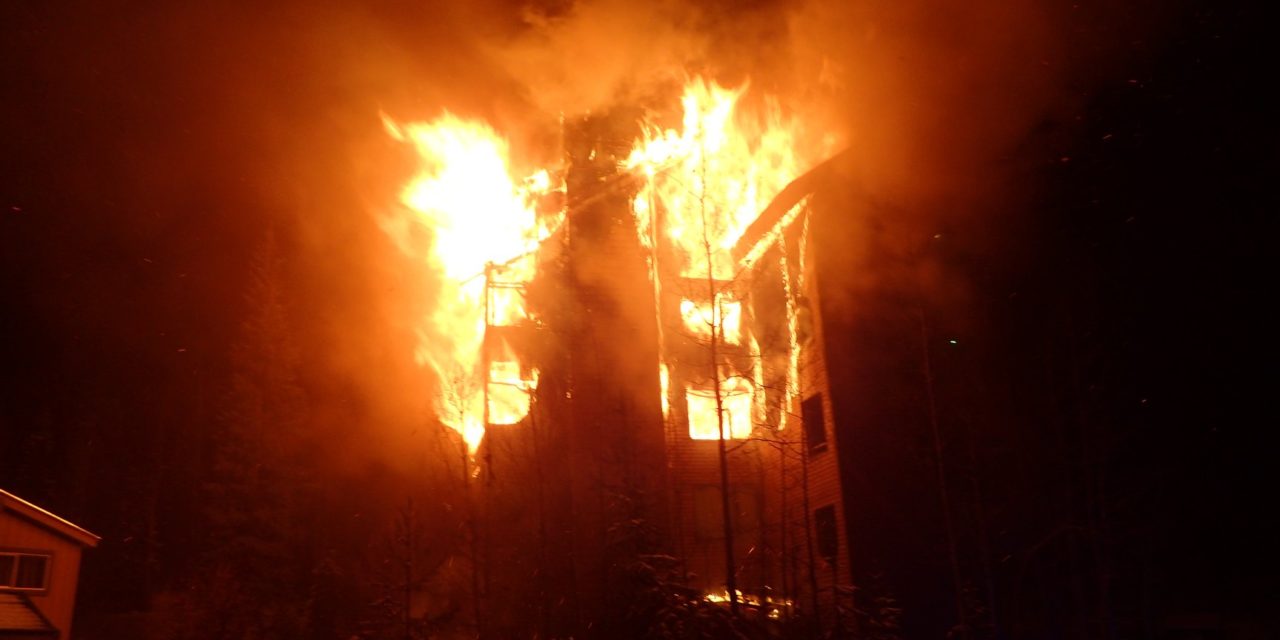 An early morning fire on Monday, April 13, claimed the life of a 28-year old male who had recently relocated to Winter Park from Denver. 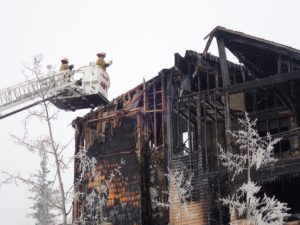 At 2:51 am on the frigid Monday morning, a 911 call about a structure fire was received by Grand County Dispatch. The caller, a resident of one of the units, was able to escape her condominium, but reported that there was a male inside Unit 201. The rest of the Braidwood Condominium building, located at 377 Lion’s Gate Drive, was reported to be vacant.

An officer of the Fraser Winter Park Police Department, who was first on scene, found the south east end of the building fully engulfed. He made entry into Unit 201 but was only able to go in a few feet before he was turned back by smoke and flames. The officer did, however, rescue the victim’s dog by the entry door. The rescued dog, a Golden Retriever named “Tank”, was transported by a local veterinarian, and is doing well, but suffering from burns and smoke inhalation. Family members of the deceased will take ownership of Tank when he has recovered.

Members of the East Grand Fire Department who responded to the scene also made entry into the unit, where a search was conducted before also being turned back by the fire. While the firefighter did not suffer any injury, the heat and flames did damage the protective clothing he was wearing.

Along with the Grand Fire District, suppression efforts were conducted on the fire for about three hours before the fire was deemed to be under control. Efforts continued for over 24 hours, putting out hot spots on the scene. 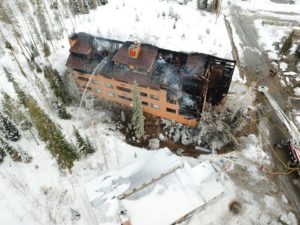 The Colorado Division of Fire Prevention and Control was contacted, and a lead investigator with that agency responded to the scene, along with additional investigative personnel from other agencies. Due to the hazardous conditions created by damage to the structure, further search efforts were not initiated until the morning of April 14th.

Working under difficult and dangerous conditions, a systematic search of the structure began at that time and continued through the next day. Investigators found that the entire third floor of Unit 301 had collapsed into the scene, leaving large amounts of debris in the unit where the search was being conducted.

To ensure the safety of investigators, a large crane was brought to the scene on April 15th to assist with the removal of debris and provide stabilization of the structure. At about 3 pm that day, the body of an adult was found inside the structure under several feet of debris.

The Grand County Coroner’s Office responded and took custody of the deceased. An autopsy to determine the cause and manner of death will be conducted. The name of the deceased has not yet been released. According to County Coroner Brenda Bock, “I’m still waiting on positive identification. Hopefully that will be done at autopsy next week.”

It is believed that the origin of the fire was in the living room area of Unit #201. Currently, the cause of the fire is unknown, pending further investigation.

The Braidwood Condominiums were built in the 1980’s. As such, there were no fire suppression systems present in the building. It is likely that the fire burned for several minutes prior to when 911 was called.

The scene has been turned over to the management company for the Braidwood Homeowners Association.