Dog Sledding at Snow Mtn Ranch: A Mushers Life for Me! 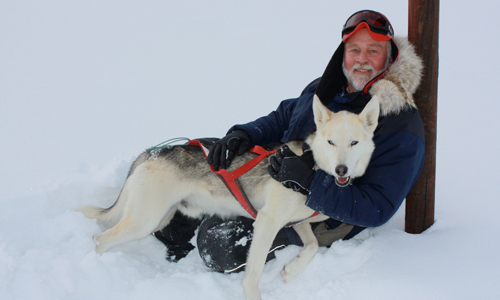 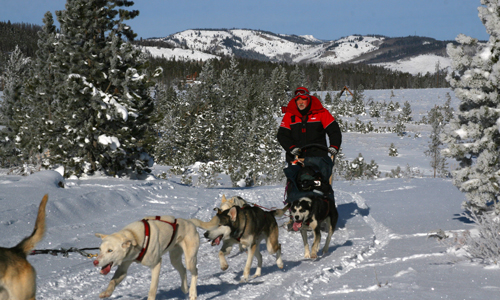 Life’s bucket list is full of new experiences. Colorado offers endless opportunities and there’s no shortage of new adventures to be tackled. Before winter melts away to spring, it’s time for you to take a spin on a dog sled.  The tour is a wonderful way to take a peek into the wintery scenes of a beautiful meadow or forested trail. If you love dogs, you will get a first-hand look at a lifestyle filled with excitement and anxious energy, waiting to be unleashed on the trail.

Much like the drive humans associate with competitive sports, or, a pet’s insatiable need to fetch, sled dogs just want to run and run they do!

Peterson’s passion for the outdoors and animals quite literally guided his path. He spent time guiding backpacking trips and found that he wanted to offer more.  In order to get out in winter, a dog pulling a pack-sled made sense. Over time, it grew into a team of dogs that led to a lifestyle.

Steve has been dog sledding for 20 years, of which he has spent the last seven at Snow Mountain Ranch. He started with an old sled and 3 dogs.  As he gained experience, his hobby became a passion and he began breeding a team for competition.

As you might guess, Peterson set his sights on the largest marathon in the lower 48, a race that is a qualifier for the famed Iditarod race in Alaska: The John Beargrease Sled Dog Marathon. Named for a native american who delivered mail to northern Minnesota residents in the late 1800’s, Steve describes the 120-mile marathon race he embarked upon in 2008 as “a grueling experience”. He told me that there’s no chance to sleep and it takes about 30 hours to complete the course.

“It was the most physically challenging thing I have ever done” said Peterson. He described the course to be comprised of checkpoints spaced about 40 miles apart and a mandatory rest period of 8 hours for the entire race. He said that many racers will do 40 miles with 4 hours’ rest and repeat. The weather can also be a huge factor in the race. Steve told me that when you pull into a checkpoint, you are massaging and checking every dog’s paws, laying out their bedding and cooking their food.  As a “musher”, you don’t get a chance to sleep or rest.

Steve says his dream would be to create a mid-distance, single checkpoint race in Colorado. He mentioned a potential race course “could run from Fraser over County Road 50 and back”.

Peterson has been breeding for years and says that he prefers Alaskan huskies.  Rather than the fluffy, black-and-white Siberian huskies, Snow Mountain Ranch teams are comprised of lighter-colored Alaskans. These dogs, says Peterson, are more compliant and better suited to long runs or races. Compared to the heavier Siberian huskies, the Alaskans are lean, despite the fact that they consume up to 6,000 calories a day in a special high-fat, high-protein diet that includes lots of frozen beef.

“These dogs are born to run,” says Peterson,  “When they get to where they can’t run anymore, they often get depressed.” Each dog has his or her own distinct personality, he says, and can become very attached to their handlers. There are currently 18 sled dogs in Steve’s kennels, with 3 other dogs that are also part of the team. Snow Mountain Ranch funds the kennel expenses throughout the year.

The Snow Mountain Ranch Dog Sledding experience is much more than a ride. It is an educational experience as well. According to Peterson, the highlight for many is the educational presentation offered prior to the ride. Snow Mountain Ranch offers close to 2,000 presentations each season and 1,500 rides. There is also a free craft session in the building for children. He estimates that about 800 participate each season, creating necklaces out of various materials or dog sleds made from popsicle sticks.

The pre-ride presentation is about 40 minutes in length. It is entertaining, filled with funny stories and information on the breed, their diet and what it takes to care for them throughout the year. The presentation has reference to Principles in Leadership in Life. The four main areas addressed in the presentation all have a faith component:

Another highlight is meeting the remarkably strong, yet gentle, dogs who pull the sleds. During the informative 40-minute presentation, visitors will see one or more of the retired animals who wander the room, happily greeting participants.

Peterson expressed “We have gained recognition for our excellent dog care. We are really unique about what we do. It’s not just rides. The whole presentation is value-based. Visitors will sign up because they want to ride, but what we hear the most is that they enjoyed the presentation.”

If you dream of yelling “Mush!” to a team of huskies in the blinding snow, while on the trail of the Iditarod, take the time to live out a (scaled-down) version of your dream by dog sledding at Snow Mountain Ranch this winter!

Remember that they have limited availability and advance reservations are required.  We recommend calling to book your ride as soon as possible. Snow Mountain Ranch is located at 1101 County Road 53 in Granby. Rides cost $30 per person for guests staying at the ranch; or, $50 for day visitors. Children five and under must be accompanied by an adult. (970) 887-2152 ext. 4135.

First it grew from 3 dogs to 10 so you could do winter camping then ran a race and got serious about the breading and long distance racing.  26 in Steves Kennell. Minnesota.  ???

their staff offers an educational presentation followed by two-mile rides that loop around a pretty, snow-covered meadow with beautiful views.

Long rides Only on Fridays.  1 hour rides is well worth it.  Only 6 rides.

Booking in advance is important.  Sells out 95%

Long rides Only on Fridays.  1 hour rides is well worth it.  Only 6 rides.

Booking in advance is important.  Sells out 95%

I think the guest

Completely funded and supported by the YMCA.  Year round

3 other dogs are part of the team.

Intend to have a liter this summer. First time in 3 years.

Training starts early may start pulling as early as 8 months.

In John’s early years, a mere footpath existed as the main means of travel from Duluth to Thunder Bay, Ontario. The path was utilized first by the native Anishinabe and was adopted later by settling European fur traders and fishing families.

Despite the remoteness of the region, it offered abundant wildlife and great promise. By the time John Beargrease was in his twenties, the North Shore had become home to numerous small settlements of fishing families which had planted themselves in the many coves of Lake Superior’s rocky shoreline.

Lake Superior’s North Shore was then and is now, subject to severe temperature changes, heavy rainfall and violent storms and travel in the area was extremely difficult despite the influx of settlers. This lead to limited communication with the outside world at a time when most other parts of the country were receiving regular mail delivery.

John Beargrease and his brothers were avid hunters and trappers and made regular trips to the region along their well-established Lake Shore Trail trap line. Recognizing the opportunity, John and his brothers picked up the job of delivering the mail by simply tossing a mailbag or two into existing packs.

For almost twenty years, between 1879 and 1899, John Beargrease and his brothers delivered the mail between Two Harbors and Grand Marais. With the limited equipment available and loads weighing as much as 700 lbs. The trip was made once a week…an incredible feat for one man to accomplish especially when you consider the constant range of altitude along the shore.

Through the seasons, the Beargrease brothers used a variety of methods to transport the mail including canoes, horses and large boats. John Beargrease himself was best known for his winter travels by dogsled. His sled looked more like a toboggan than today’s sleds and he ran with teams of only four dogs. His fastest trip on dogsled was 28 hours from Two Harbors to Grand Marais. Without the weight, and with today’s advances in technology, Beargrease mushers can accomplish the same trip in little better time, with teams of up to sixteen dogs.

John Beargrease was pivotal in the development of the entire North Shore and the communities who have maintained their foothold there over the past century. With his successful delivery, the population and economy stabilized and permanent towns made their mark on the landscape. Today we celebrate the vital role of John Beargrease in the early history of the North Shore of Lake Superior through the annual running of the John Beargrease Sled Dog Marathon.

1899 would be the last year John Beargrease delivered the mail. The Lake Shore Trail that he had traveled for twenty years became an actual road, one that could be traveled with horse and buggy. John ended his last trip to Grand Marais on April 26, 1899.

He made his home in both Beaver Bay and among his people in Grand Portage. He never forgot how much the people living on the North Shore depended upon the mail. One day in 1910, he went out in a storm to rescue another mail carrier whose boat was caught in the waves off Tamarack Point, near Grand Portage. He caught pneumonia after the ordeal and died soon after. His grave can be seen today at the Indian Cemetery in Beaver Bay.