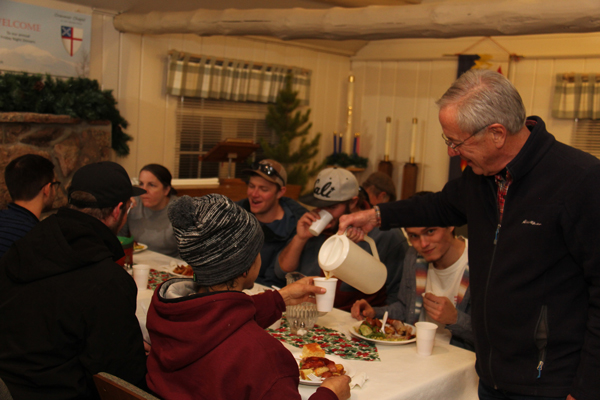 It has been over twenty years since the first Community Dinner was served by members of St. John’s Episcopal Church. It began when members invited newly arrived workers into their homes for a home-cooked meal during the long winter season. For many, it was their first time away from home and the meals were very well received.

In 1999, a Community Dinner was served on Thanksgiving at the then St. Columba’s Episcopal Chapel in Winter Park.  Spearheaded by the late Joan Von der Heiden and her husband Ken, they worked to secure a place to serve the meals, and gained permission from St. John’s Episcopal Church to use the Winter Park St. Columba Chapel (since renamed the Cranmer Memorial Chapel, after the residing Rev. Chappell Cranmer passed away in 2000).

The Thanksgiving meal was a huge success and everyone involved focused on providing the dinners with more regularity.  Joan approached Winter Park Resort COO, Gary DeFrange, outlining a plan to provide dinners every other Friday night, opposite resort paydays. The Resort was very supportive, and assumed responsibility for one of the dinners, providing both the full meal as well as the serving staff for that evening. Other participating organizations include the Jewish Community, Mountain Family Center, Fraser Valley Lion’s Club and more. Their support of these dinners allows the program to continue each year.

At this time, various organizations in the valley cover the alternating Friday Nights by hosting dinners throughout the winter season, beginning with Thanksgiving. The season will finish off with the last dinner scheduled for March 30, 2018.  With the exception of the Jewish Community and Winter Park Resort, participating organizations provide the side dishes, desserts and servers.  The main course is then prepared by Jim Magill and Gary Piper, who regularly “borrow” ovens from friends and neighbors to complete their task.

According to Piper, at this year’s Thanksgiving meal, they served 8 good-sized turkeys and sent many away with delicious leftovers. We stopped by last Friday’s dinner where Winter Park Resort provided the meal and the serving staff, comprised mainly of resort leadership. Of course, we also found Jim and Gary on hand to lend support wherever needed. The final night’s tally showed that they served 110 meals to in-house diners, and, they sent out another 40 generously filled “to go” boxes as well.

According to Magill, since the program started, they have served over 24,000 meals, and, they are hoping to break 25,000 this season. Based upon attendance at the last two meals, it looks like they could very well meet this goal! The Cranmer Chapel Community Dinners are non-denominational and all members of the community are welcome. The next meal, provided by the Jewish Community, is set for Friday, December 22, from 5-7 pm. Future dates will be listed throughout the season in our Community Calendar.