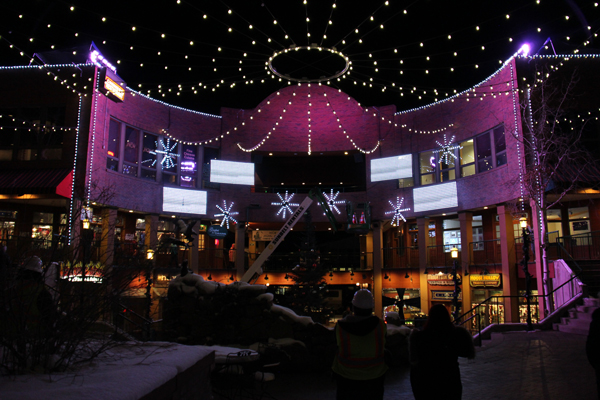 Cooper Creek Square contracted Blazen Illuminations of Loveland to help with design and installation of the massive system featuring over 20,000 lights. Blazen has been involved in the theme park and entertainment industries since 1998. They established the Holiday Lighting display for Denver’s City and County building in 2009, and, it takes a team of four installers eight days to complete. “Cooper Creek Square’s building design makes an interesting palette.” observed Blazen Installer Truitt Murrow. Blazen’s team of four installers arrived on Monday, December 4, and they worked through the following Sunday to ensure a seamless inaugural performance of the new show.

The light show, a 30-minute mix of lights synchronized to music, was funded in part by a downtown enhancement grant from the Town of Winter Park. The added funds allowed Cooper Creek Square to expand the show, creating a “must see” attraction. The show is centered in the Courtyard, but light placement allows for it to be viewed from different vantage points throughout the plaza.

The show features a prelude, where lighting feature “teasers” are introduced, and, the main show incorporates all elements, including snowflakes, circles and moving lights with a powerful soundtrack.

The show will run nightly from dusk to 10 pm every half hour through late February or early March, with start times adjusted to align with dusk.

At the December 12th meeting, the final design elements and parking plans for the Sitzmark South Phase II (buildings G & H) were presented to the Commissioners by Peter Van Deusen, Project Designer & Manager, and Jeff Vogel, of Vogel & Associates. The project has chosen to utilize Cementitious Lap Siding with a dark grey/charcoal paint as the trim element previously in question. The parking concerns were also addressed and have been adjusted to comply with Town code. The commissioners approved the finalized plan unanimously.

Jeff Vogel, representing Fraser River Development Company LLC, next presented the new current ROAM Development Plan to the commissioners. Vogel has applied to the Town to annex and zone the 172 acre parcel of land located just south of town, in the area where Beaver’s Lodge is currently located.  The rebranded name ROAM was chosen as a new concept to highlight connectivity and integration with the Town and reflects the vibrant community. ROAM implies discovering… yourself, the region and the Town.

Fraser River Development Company LLC was in the process of finalizing the Development Plan, incorporating comments received by the Town and Planning Commission and will present the Final Development Plan at next week’s Town Council meeting on December 19th.

Craig Dewars of Cabin Properties presented updated plans for the Whistlestop Duplex project on Lion’s Gate Drive. The plans he provided still left several questions unanswered and the commission motioned to allow Dewars to work with Town staff on finalizing Building B plans, allowing a permit to be issued provided there is no variance to code. Dewars will need to return with complete plans for approval of buildings C and D. 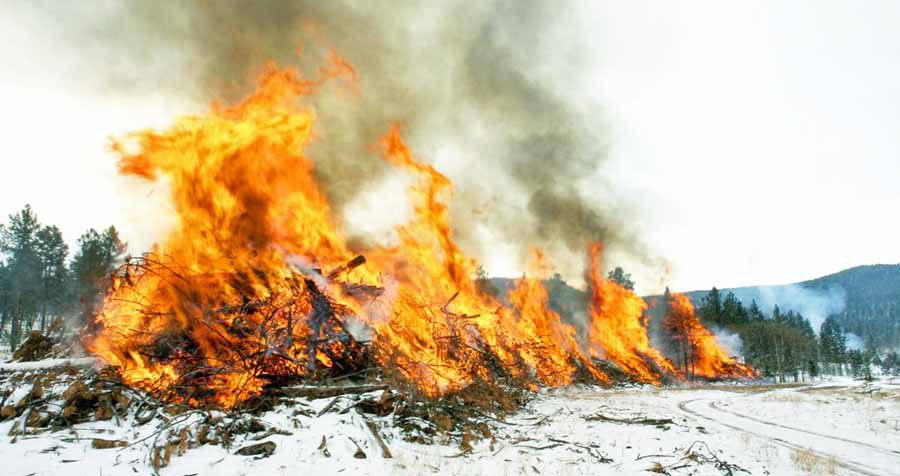 Fuel Reduction in the Vasquez Creek Area of Winter Park has been filing the skies with smoke the last couple of weeks as the US Forest Service has been working to burn some 2,500 hand piles and 162 machine piles under favorable conditions.  As winter conditions settle in, the Sulphur Ranger District of the Arapaho National Forest teams will work to finish the fuels reduction and hazardous tree removal projects in that area.

Hand piles are a result of crews using chainsaws to thin the forest. Much of the smaller cut material was piled for burning in the last couple of years. Machine piles are the result of using logging equipment and consist of primarily the limbs of trees as most of the logs have already been removed.

Last season, the Sulphur Ranger District accomplished more than 805 acres of pile burning, which included burning approximately 362 large machine piles and 684 smaller hand piles. This season’s pile burning should complete this phase of the project in the Winter Park area and officials forecast  to wrap up by spring.

Town of Fraser Board of Trustees Meeting

The Town of Fraser Board of Trustees met Wednesday evening, December 6. After a presentation of the Fraser River Corridor Master Plan by design firm, THK, the board moved on to the Consent Agenda. All items listed were approved, including several resolutions to execute contract/agreements and execution of leases/licenses for Town Property. They approved designation of Police Chief, Glen Trainor, as Emergency Response Authority, and, they renewed the Town’s Three Mile Plan.

The Board also approved a resolution authorizing execution of the Pedestrian Safety Improvements Project Intergovernmental Agreement. The project combines grants and $800,000 of Colorado state funding, and, is considered a local agency project.  Last winter, a traffic study was completed, and, the counts indicated necessity for a third crosswalk, so the new design will include 3 crosswalks and five islands to be added during the project.  Local engineering firm, Bowman Consulting, has been contracted to do the design work. The Trustees requested that, as design plans become available, they are shared with them. They added that all businesses in proximity to the impacted areas on Highway 40 should also be involved in the process.  It was confirmed that an open house will be held once details are available, providing opportunity for public engagement and community input.

In other business, the new “pay as you throw” trash and recycling facility will be located west of town on County Road 72 and the location will not require any property acquisition proceedings.  The bid for excavation is set to go out in January 2018. The Town has had discussions with neighboring businesses, the historic Fraser tubing hill, the Fraser cemetery, and Colorado Adventure Park have been contacted and no concerns have been expressed. However, since the road will be rerouted, the Historic Fraser Tubing Hill is investigating the possibility of redesigning their parking area.

For more information on Town of Fraser happenings, visit frasercolorado.com

The Longest Night
The winter solstice, or first day of winter, also marks the longest night of the year.  For millennia, cultures around the world have welcomed the date when the lengthening days with feasting, music, and lights.  But for those who are struggling with depression or grief the night can seem even longer and darker.  This may be the first holiday season without a loved one, or they may be dealing with alienation from family and friends.  The once-joyful gatherings may now only be reminders of what they have lost or never had, and pressure to participate in the fever-pitch excitement of the season can often intensify the pain.
Recognizing this, many churches now offer a “Longest Night” or “Blue Christmas” service around the date of the solstice.  These services are designed to be quieter, more introspective and intimate gathering where participants can acknowledge and share their grief while at the same time reflecting on the peace and love that the season brings.  Appropriate seasonal music and candlelight are used to warm the gathering.
This year, anyone in need of a quiet refuge from the season’s hustle and bustle is invited to Presbyterian Church of the Eternal Hills for a Longest Night service on Thursday, December 21, at 5:30pm.