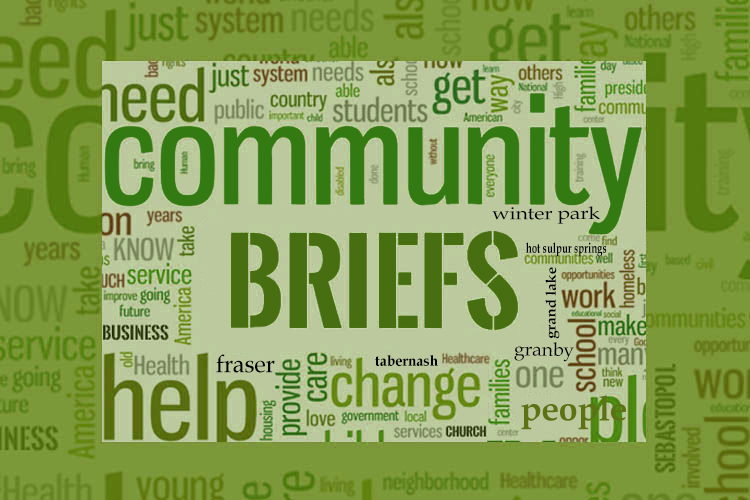 On November 7, while many in the state and country will be voting on state, local, and school district issues, Grand County residents will be going about Tuesday-as-usual. The Grand County Clerk and Recorder’s Office has cancelled the 2017 general election.

“We’ve never cancelled an election, to my knowledge,” commented Grand County Clerk and Recorder Sara Rosene, whose office is responsible for election administration. But an unusual number of circumstances lined up this year to result in no ballot measures being moved forward for the County ballot.

Rosene explains that odd year or coordinated elections are set up primarily for school district votes, but that the process is used for local issues as well. As it happens, there are no state questions on the ballot for 2017, and Grand County had only one anticipated ballot measure, a vote on whether or not to opt out of Colorado Senate Bill 152, which restricts the ability of government to invest in internet infrastructure or services.

Both East and West Grand School Districts had open board seats this year. However, East Grand cancelled their election prior to the ballot deadline, having just sufficient candidates for the open seats. At the time, West Grand had five applicants for four open seats and filed to be placed on the ballot. But on September 14, at the most recent school board meeting, the West Grand board voted to officially cancel the election after one of the candidates withdrew her petition.

The County was left facing a costly and time-consuming election process, with only one question on the ballot. An early concern over issue SB 152 was that the opt-out was time sensitive. But County Manager Lee Staab reported that, given additional information, the vote could still be put before Grand County voters in 2018. Staab further indicated that the resolution for the ballot measure, which had been approved by unanimous vote of the Grand County Board of County Commissioners at a regular Board meeting on July 25, had never been signed.

The Town of Fraser received design resiliency technical assistance (DART).  The assistance is provided by the American Institute of Architects and the Urban Sustainability Directors Network.
On September 11-13th, 2017, Fraser welcomed an all volunteer consulting group from across the country with expertise in the following fields: Political structure, land use, envisioning downtown and mixed-use housing, planning and sustainability, economic and market analysis, affordable and workforce housing, climate adaptation and hazard mitigation.
The community spoke and said we want small town life, community, authenticity.  “Cookie cutter isn’t cool; not for Fraser.”  The goal of the workshop is to help Fraser develop a strategic vision and promote community resiliency.
The Colorado Resiliency Framework defines resiliency as the following:  The ability of communities to rebound, positively adapt to, or thrive amidst changing conditions or challenges – including disasters and climate change – and maintain quality of life, healthy growth, durable systems, and conservation of resources for present and future generations.
The consulting team analyzed what is preventing Fraser from being resilient.  The following challenges were identified: Lack of diverse, year-round economy; Lack of affordable and attainable housing; Challenge of US40 bisecting the town; Lack of mixed use development; and Floodplain and water supply.  The team will be providing the Town of Fraser with a final report and recommended next steps to promote community resiliency to help Fraser act, adapt and thrive!
The Town of Fraser would like to thank everyone who participated in the community involvement event.

Granby NonProfit Moffat Road Railroad Museum was recognized on Channel 9 for their work preserving a part of the American Heritage, just down from Railroad Avenue, Dave Naples is busy with small model trains and much larger ones. He’s been working to preserve Colorado’s railroad history by spending the last decade building the Moffat Road Railroad interpretive Museum. For Naples, this work in progress combines small model trains and life sized versions.  These pieces will give visitors the opportunity to step back in time to the glory days of rail transportation.  “Transport you to the early 1900’s the minute you walk in,” said Naples. There’s a 1905 all wooden railcar. It’s a little run down and in need of hundreds of thousands of dollars in restoration, but once was the height of first class transportation.
“Sometimes the big ideas can be really big, this is a really big idea” said Naples. Dave Naples with the Railroad Museum invites you to see the video piece he put together with the Channel9 reporter, Matt Renoux. Go to 9News online and see the spot. http://www.9news.com/life/style/colorado-guide/railroad-museum-in-granby-nearing-completion

By the way, he Model Railroad Club is starting on the new permanent model train layout this month. This layout will be 1,100 sq.ft. – bigger than last years and many more features so all the time and effort you all can put in will be greatly needed and appreciated. Opening day is November 26th.  Looking for more O scale donations of trains.  Dave – 970-281-9094 to volunteer or questions.

The states involved stopped short of saying fraud had been committed in all of the cases, noting further investigation could reveal administrative explanations. The states selected for participation in the months-long study were all three mail-ballot states — Colorado, Oregon and Washington — and two neighboring polling-place states, Delaware and Maryland.

The plan to do the study came before allegations of voter fraud in the presidential race, and the extensive research comparing voter data among the five states started before the formation of the Presidential Advisory Commission on Election Integrity and was performed independent of the commission.

The Colorado Secretary of State’s office is providing information about the 48 instances, along with other issues, such as signature problems, to law enforcement. Conducting their own research following the election, Colorado county election officials previously identified a handful of the 48 cases and provided that information to law enforcement. The new cases will be sent for investigation.

“A very small percentage of the 2.9 million votes cast in Colorado in the 2016 election look to be improper, but even that small number deserves our vigilant pursuit,” Colorado Secretary of State Wayne Williams said.

The investigation revealed possible improper voting by Coloradans who are unaffiliated, Republican, Democrat and members of minor parties.

“Colorado’s county election administrators continue to do an outstanding job of protecting Colorado’s elections from fraud,” Williams said. “The vast majority of these cases involve voters who voted twice in ways the counties could not detect during the election. That’s why we take post-election reviews and prosecutions so seriously.”

At the request of law enforcement, the secretary of state is not releasing the names of Coloradans who may have improperly participated in the 2016 election or the counties they voted in until the investigation is complete.

Grand Mountain Bank
Grand Mountain Bancshares, Inc., parent company for Grand Mountain Bank, FSB announced today that it has completed a recapitalization transaction, which resulted in the issuance of $5.6 million of common stock and $1.5 million in senior notes.  As part of the recapitalization transaction, the Company retired its TARP preferred stock held by the United States Department of Treasury. The company also settled its outstanding debt obligations through the payment of cash and issuance of common stock to the holders of the debt.  FIG Partners, LLC acted as sole placement agent in the transaction.
Frank DeLay, President, stated, “We are pleased to announce the completion of the recapitalization and the retirement of the TARP preferred stock.  As the only bank based in Grand County, the additional capital places Grand Mountain Bank in a unique position to continue to grow with the local economy.  We are excited about the opportunities we can offer to consumers and small business owners.”
Grand Mountain Bancshares, Inc. is the holding company for Grand Mountain Bank FSB, a savings and loan association formed in 2003 with four full-service locations in Grand County, Colorado, and the only bank based on Grand County.   Grand Mountain Bank specializes in home mortgage, home construction and commercial lending.  The Bank is FDIC insured and an equal housing lender.

Major John Wesley Powell Turns 150:  The Powell Expeditions to Colorado (1867 – 1869)
Presented by Ray Sumner
In 1867, Major John Wesley Powell headed west from Bloomington, Illinois with a group amateur naturalists and college students to explore the Rocky Mountains.  This trip and his second the next year set Powell on a lifelong course of exploring and mapping the American West.  It ultimately forever changed the nature of government sponsored science through Powell’s leadership as the second director of the United States Geological Service.  His later fame and contributions though were clearly enabled and rooted in the time and people he met and partnered with here in Colorado.  Without people such as William Byers, Jack Sumner, Oramel Howland, and Billy Hawkins, Major Powell would have never set sail yet alone survived his famous journey through the Grand Canyon.