Colorado Roads Cause For Concern 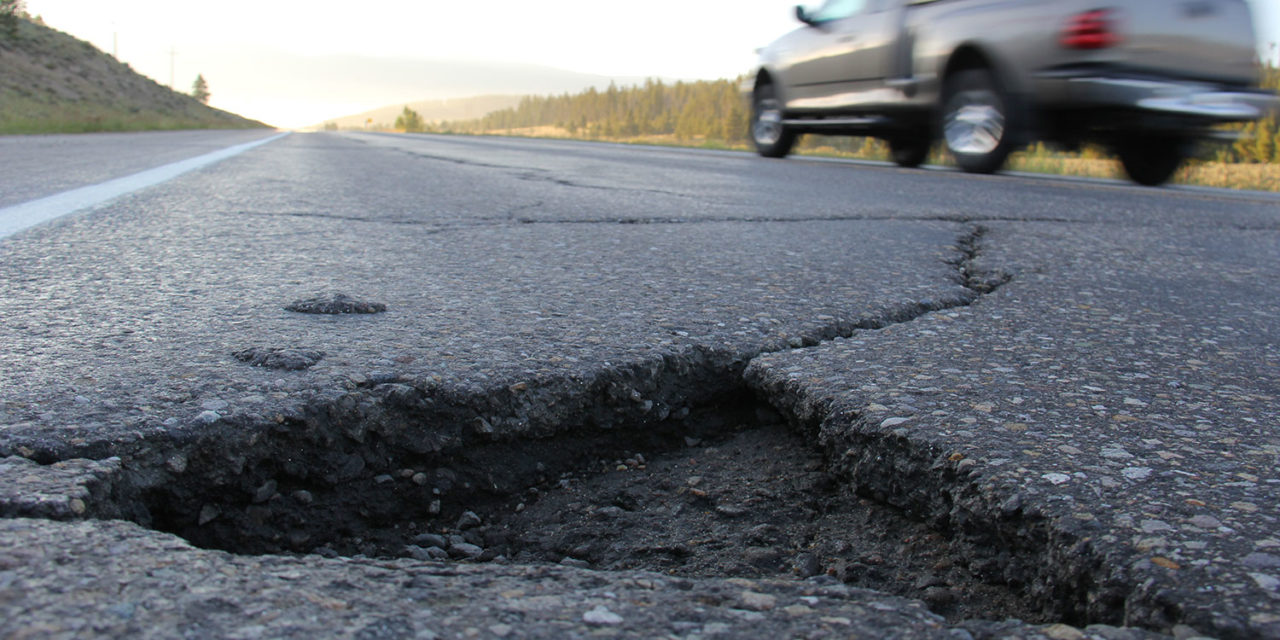 Colorado Department of transportation made a quick pass down Highway 40 and repaired several sections of pavement last week.  With funding in question for a major paving project, CDOT repaired the worst sections and put bandaids on sections contractors believe will hold out for another season.  The problem is they missed a few (thousand).

Deterioration and road failures are common throughout Colorado and especially Grand County due to the continuous freeze-thaw cycles.  When moisture seeps into cracks in the surface of a road and freezes, it causes it to expand. When the ice thaws that space is left empty, and combined with frequent or heavy traffic over the crack, the asphalt deteriorates.

Highway 40 throughout the county is showing signs of deterioration and is in need of some major repairs. The problem is, there’s no money to do any of it.   “Almost all of our budget right now is going to maintaining our system,” said Colorado Department of Transportation Executive Director Shailen Bhatt. “We are not adding capacity to do more.”

Right now, CDOT only has enough money to maintain the state’s highway system in its current condition for the next 10 years.  “How much more can we stand?” Bhatt laments. “We need to seriously, really evaluate everything we’re doing and how we’re doing it.”

Currently, projected state revenues will cover 46 percent of Colorado’s transportation needs over the next 25 years. The department faces a $25 billion revenue shortfall over that period, including a nearly $9 billion shortage over the next 10 years.

At the same time, the state’s population is expected to climb from 5.4 million to an estimated 8 million by 2040.  More than 120,000 people moved to Colorado last year and the state posted the second-highest growth rate in the nation, according to the State Demography Office.

More than one-third of Colorado’s roads are in poor condition, and funding continues to fall behind growth. One thing is for sure you will need to keep your eyes on the road and your hands on the wheel to navigate the crumbling pavement in our county.

Pothole Patching
Potholes are generally caused by moisture, freeze-thaw action, traffic, poor underlying support, or some combination of these factors. The Operations & Maintenance Division fixes potholes using two different methods: semi-permanent pothole repairs and pothole filling.  Pothole filling is less time consuming but more temporary in nature.  Repairing is the preferred fix; however there are times when it simply isn’t feasible. For instance, when there is a long list of potholes to be addressed during emergency winter operations.  Regardless, the result is to make the roadway suitable for travel and safe for citizens.  The Operations & Maintenance Division works across all areas of Grand County year round as weather permits.  ​

Dig-outs are performed when the pavement has failed in localized areas to an extent that the underlying support materials have disintegrated or otherwise lost their load carrying capacity.  Dig Outs require the removal and replacement of much, if not all, of the underlying base/sub base materials.  Due to the thorough nature of this method of repair it has sometimes been referred to as “spot reconstruction.”

Crack Seal
Pavement cracking is an inevitable occurrence that requires routine proactive maintenance strategies to mitigate and extend the pavements service life.  Cracking requires treatment to prevent moisture from getting underneath the roadway and accelerating pavement deterioration.  Neglecting cracks results in significant problems such as potholes and pavement failure, which will cost more to maintain and repair.

Crack filling and sealing is one of the main preventative maintenance practices for pavements.   Since failure to repair/treat cracks in a timely fashion can lead to accelerated deterioration, it is important to find effective solutions to minimize its effect and extend the service life of our roads.

Chip Seal
Chip Seal is a resurfacing treatment that places a thin layer of asphalt emulsion, followed immediately by the application of 3/8” or 1/4” rock chips, over pavement surfaces that are in sound condition. A “fog seal” is applied to lock the new surface in place. Chip Seal provides a coarse wearing surface with increased tire traction, improving safety during winter driving conditions and helping to protect and lengthen the life of the asphalt driving surface. It is considered a preventative treatment that helps to keep the “good roads good.” 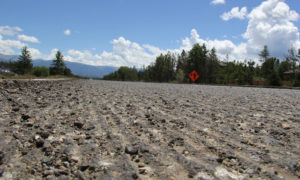 Pavement Overlay
Pavement overlay is used when a road has reached the end of its service life. To perform a pavement overlay, crews mill, or remove, the top layer of asphalt from the surface of the roadway. Dig-outs are performed in any spots on the roadway where there are underlying weaknesses that would cause a newly paved road to deteriorate prematurely.  A new layer of asphalt is applied and compacted with a roller, and new lines are painted on the roadway.  Overlay operations begin in May and continue through October, weather permitting.

Pavement Reconstruction
When a road is significantly deteriorated and will not benefit from routine preventative maintenance, the road needs  to  be reconstructed.  This entails removing the entire layer of pavement and  possibly the subgrade below the pavement and rebuilding the road from the subgrade up, essentially creating a new road.

The Operations & Maintenance Division performs routine street sweeping operations for vehicle and pedestrian safety, to keep our streets clean, and to reduce air and water pollution by preventing trash, sand, salt, and other pollutants from entering and plugging our storm water system. The Colorado Springs Municipal Separate Storm Sewer System (MS4) Permit indicates that we must prevent or reduce storm water pollution from streets, roads, and highways. The street sweeping program is one way we accomplish this. Annually, the city sweeps approximately 5,688 lane miles of public streets and, as a result, disposes of over 1,200 cubic yards of sediment, leaves, and other debris.

Complicated Funding Process For Roads
Colorado is an attractive destination these days, given the state’s diverse economy, low unemployment rate and aesthetic qualities. But Gov. John Hickenlooper acknowledges how the state’s growing pains manifest on our highways.

“We are strangling in our success,” Hickenlooper said. “We have become this destination for millennials; entrepreneurs are flocking here starting businesses, and yet we are not investing into our transportation infrastructure the way we should be.” 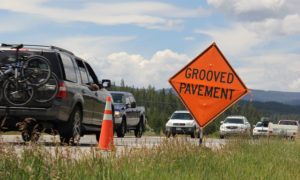 But future budget year forecasts indicate those transfers will be significantly reduced or even wiped out entirely. That’s because the transfers are, by law, impacted when Colorado taxpayers are due refunds, which is soon to be the case. The Taxpayer Bill of Rights requires tax refunds when state revenue exceeds the rate of inflation and population growth.

The bigger the refund, the less money goes to roads. Right now, refunds on 2015 tax returns are estimated at $157 million, which breaks down to $13-$41 for a single filer. And the slightest adjustment in revenues in either direction can throw a monkey wrench into budget planning due to uncontrollable contingencies.

“It creates these hairpin triggers,” said Tim Hoover, a spokesman for the Colorado Fiscal Institute, a left-leaning think tank. “If you’re up $50 million or down $50 million, you’re either giving huge refunds or making huge cuts and you can’t always tell a few months earlier what the situation is going to be.”

Steadman, who sits on the legislature’s Joint Budget Committee, a group that’s tasked with writing the annual budget, says lawmakers would like to change the current highway funding mechanism into something more reliable, but that won’t be easy.

“That’s going to be a pretty difficult conversation and it’s not clear that if we were to reopen that law, that we could find consensus on a different way to do it,” Steadman said. “So, we may just have to get used to the uncertainty and the unpleasant surprises that a forecast and a change in an estimate bring about.”

The state’s gas tax, which is currently 22 cents per gallon, has not changed since 1992. And the gas tax does not rise when gas prices go up. Colorado’s gas tax falls below 34 other states –including neighboring states of Nebraska, Utah and Wyoming, which have raised their gas taxes over the last few years.

And, with more fuel-efficient vehicles on the roads that require fewer stops at the pump, revenues collected from the gas tax continue to dwindle.

The gas tax may not increase any time soon. But a proposal to increase the state’s sales is currently in the works.

Disagreement Over Alternate Funding Sources
Bill Ray (no relation to Dick), a consultant for the Colorado Contractors Association, said polling shows that Coloradans are open to a sales tax increase for transportation funding. He said it is “likely” that a measure could end up on the November ballot.

However, Minority Leader Brian DelGrosso, R-Loveland, believes there are solutions to the transportation funding shortfall, but he doesn’t think Colorado voters have an appetite for increased taxes — something even Democrats acknowledge.

“Quite frankly, the voters of Colorado are still not very excited about digging deeper into their wallets to do that,” DelGrosso said. “(Voters say) ‘Look, we’re sending you a bunch of money as it is; maybe we don’t like where you’re spending money now.’”

Instead, DelGrosso and other Republicans favor a proposal to seek voter approval for $3.5 billion in bonds for highway project funding.

But that has been a non-starter for Democrats who say the state can’t repay the bonds.

“If you don’t have a way to pay for it, you shouldn’t be going out there and trying to bond against money you don’t have,” said Rep. Max Tyler, D-Lakewood, who chairs the House Transportation and Energy Committee. “That’s just plain foolish.”

Democrats prefer a Hickenlooper-backed proposal that would reclassify the Hospital Provider Fee program. These are fees hospitals collect as state revenue to obtain federal funds that have helped expand Medicaid and other health services for low-income residents.

Democrats want to reclassify these fees as TABOR-exempt revenue. This could free up hundreds of millions of dollars in revenue for education and transportation — as much as $756 million for the next fiscal year.

But Republicans have balked at the proposal. And even Hickenlooper acknowledges the freed-up revenues would only provide a short-term funding solution for roads.

“I don’t think the Hospital Provider Fee solves all the problems of the state, but it does allow us to provide some big improvements,” he said.

The governor said he would be open to a bonding measure if an agreement can be reached on the hospital provider fee. The governor said the state would then have more money available to pay the bonds. Republican leadership has yet to talk publicly about whether a potential compromise is on the table.

In the meantime, Bhatt said his department is trying to make do with existing resources, as well as to seek innovative solutions. On major road expansion projects, CDOT has turned to public-private funding partnerships, such as the one that resulted in recent improvements to US 36 between Denver and Boulder. Private money helps fill the gaps in projects that the state can not fully fund on its own.

But Bhatt says those partnerships can only go so far if the state doesn’t have the resources to woo contractors — and the ability to pay them back. As far as toll lanes go, Bhatt said they provide very little revenue and are used primarily to mitigate congestion.

“We’re going to have to break out of the mindset of ‘We want government services. We want government to provide infrastructure, but we don’t want to pay for it. We just want a tax refund,’” Steadman said. “Folks, that doesn’t work. It’s not logical. And it’s not how you fund important infrastructure that our economy depends on.”

As lawmakers try to figure things out, Reggie McGee of Denver tries to be patient. He had just pulled into a gas station after getting off of the Colorado Boulevard exit at I-25.

“They need to come up with some kind of alternative because traffic is just too backed up,” McGee said, who has lived in Colorado all of his life.

McGee was then asked how he manages to get through all of this traffic.