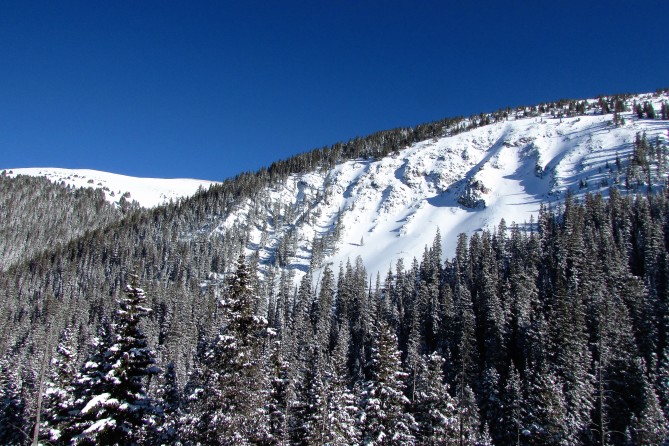 According to the Colorado Avalanche Information Center, portions of the Vail-Summit and Front Range zones have developed a Deep Persistent Slab avalanche problem. This means you can trigger very large and unsurvivable avalanches even though there are few signs of instability. Specific terrain features need to be avoided to stay safe.  This situation will be with us for a while. This video summarizes the current situation.

According to a CAIC Accident Summary, on February 11, 2018, “a solo skier unintentionally triggered and was carried in an avalanche in the area locally known as the Fingers just west of the summit of Berthoud Pass.  The avalanche was a soft slab avalanche and occurred on a northwest aspect near treeline.  It was small relative to the path, but large enough to bury, injure, or kill a person.  It ran within the old snow (SS-ASu-R2-D2-O).  The skier was solo at the time of the accident, but had been skiing with a group on the pass during the day.  The skier entered into the farthest north of the fingers and made a cut across the top of the gully.  He did not like what he saw, so he traversed across and into the next gully to the south.  Upon entering this gully he triggered the avalanche and was carried to the bottom of the path.  He lost his equipment during the avalanche.  When he came to rest he was face down with his arm in front of his face. He was able to self-extricate and then was assisted to the road by a bystander who was skiing in the area.”

Variable weather conditions over the next week will continue to create avalanche problems. Be vigilant, always ski or ride with others and visit: avalanche.state.co.us