On Thursday morning, a store manager in Fraser was preparing the previous day’s deposit and discovered a “thicker than normal” bill in the cash drawer. With previous banking experience, she suspected that the $10 bill was not real, and, after viewing the bill in the light, her suspicions were confirmed.

She contacted the Fraser Winter Park Police Department and Officer Matthew Murdoch responded to the call, seizing the fraudulent currency. Officer Murdoch told the Winter Park Times there is an ongoing investigation to identify any suspects in the case. He also stated there were no other recent reports of counterfeit currency being passed.

According to statistics, most counterfeiters manufacture bills of higher value. The $20 bill is the most frequently counterfeited denomination, so finding a counterfeit $10 bill is unusual.

There are several ways to identify a counterfeit bill:

Authentic currency is made from cotton and linen fibers, and has slightly raised ink that is impossible for counterfeiters to reproduce, so it should feel more crisp than regular paper. When possible, compare the bill with another if you suspect it to be fraudulent.

Most newer bills have a watermark replica of the face on the bill in question, located on the right side of the front of the bill. By holding it up to a light, you will clearly see the holographic image which should match the face in the center of the bill.

The newer bills also have a security thread that, when held up to the light, will reveal a vertical line with USA and the bill’s denomination (e.g., USA TEN).

The newly printed $100 bill has a visible 3D blue security line on the right side of the bill. When moved back and forth, you will see the number 100 and tiny bells will move from side-to-side as the bill shifts.

While business operators should be vigilant, it is important that consumers are also aware. The use of counterfeit currency violates both federal and state law, and, charges including forgery, fraud and theft can apply.

We hope that this is indeed an isolated incident, but just in case, be aware there may be more fraudulent currency in use locally. If you suspect counterfeit currency is being offered by a customer, contact the police department immediately and let them investigate the matter.

Here are front and back images of the bill received – would you know this was counterfeit? 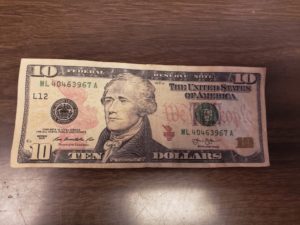 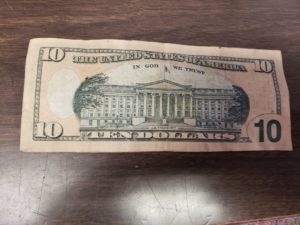