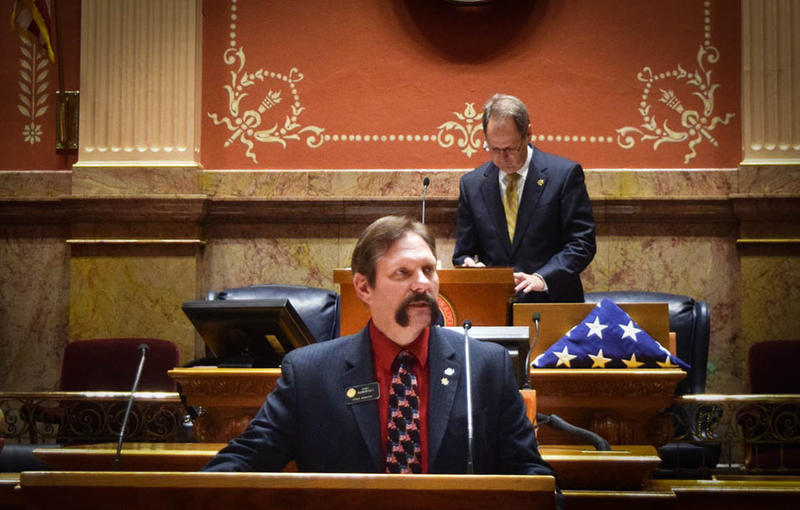 The woman alleges that Baumgardner of Hot Sulphur Springs slapped and grabbed her buttocks about four times over a three month period during the 2016 legislative session when she worked at the State Capitol. She alleges that each incident happened inside the Capitol building during her workday, often while she was walking through a corridor next to the Senate Chamber.

She wishes to remain anonymous out of fear of retribution. The formal process allows the complaint to remain private.  She said the incidents were embarrassing and she didn’t tell her supervisors, but did tell two people who also worked at the Capitol at that time.

“I just thought this was something you had to push aside. I always knew he was someone to stay away from,” she said. “He’s just unsavory. They’re like, that’s how he is. It’s very well known.”

Baumgardner addressed the allegations in an emailed statement to us.  “Because the reporting process is confidential, I am unable to comment on the specifics of what’s being reported in the press,” he said. “I trust in the process — allowing the facts to be thoroughly investigated and all sides to be heard — and ask that we not allow the media to be the final word on such matters.”

Republican Senate President Kevin Grantham referred back to an earlier written statement in which he said he would not respond to unsubstantiated or anonymous allegations against members appearing in the press. He said those who feel they have been victims should file an official complaint.

“This process exists to protect confidentiality, respect the rights of both accuser and accused, rigorously review the facts, give a fair hearing to all sides, and impose penalties proportionate to any confirmed offense,” said Grantham in the statement.

The wave of allegations continues to grow as Capital Coverage reported Nov 10th that nine Colorado legislators, staffers and lobbyists alleged that Rep. Steve Lebsock, a Democrat running for state treasurer, harassed, intimidated or made unwanted sexual advances against them. Two other women have since come forward publicly. And two, Democratic Rep. Faith Winter and former lobbyist Holly Tarry, have filed formal complaints against Lebsock.

The governor and speaker of the house have called for his resignation.  Legislative leaders are meeting in December to review the workplace harassment policies for the general assembly.