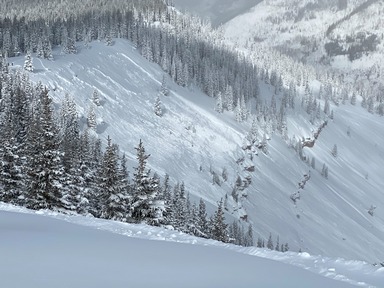 Photo: On February 4, 2021, a skier was caught and killed in an avalanche in the backcountry south of Vail. The avalanche occurred on an east-facing slope below treeline. Rescuers estimated the avalanche as 700 feet wide, and it ran 1000 vertical feet.  Photo courtesy of CAIC

It is likely that you can trigger avalanches like these across the mountains of Colorado today. Natural avalanches can start at high elevations and run far down avalanche paths. There is an Avalanche Warning for the Steamboat & Flat Tops and Vail & Summit County zones. The avalanche danger is High (Level 4) or Considerable (Level 3) in most other areas, meaning “very dangerous avalanche conditions” in the backcountry.

Over a foot of new snow and strong winds have combined to overload our fragile snowpack. Large, wide, and deadly avalanches will be very easy to trigger. Natural avalanches can run long distances. Backcountry travelers should stay off of, and out from underneath slopes steeper than 30 degrees.

Know Before You Go! Check the avalanche forecast at colorado.gov/avalanche for the latest updates.