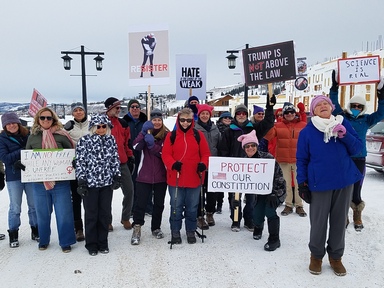 A group of about thirty hardy souls braved the frigid temperatures, some clad in pink hats and carrying message boards, and gathered in the parking lot of The Foundry. From there, the group headed south into Winter Park, sharing their message of solidarity. They traveled to Village Drive, crossed US 40 and headed north, returning to The Foundry parking lot.

Organizer Martha Baird took the initiative to hold this year’s march in the valley to make it more accessible to those that wanted to participate. “We’ve marched that same route other times for other causes, so I knew it was possible,” said Baird, adding, “the decision to have the march and what the route would be was mine. I also advertised our march on the national website. I am associated with several progressive groups, so I knew I would have at least a few people.”

“I was thrilled to see there was a march scheduled here,” said participant Tash Sullivan. Last year, Sullivan traveled to Colorado Springs to participate in the march, a commute much farther than Fraser/Winter Park.

Baird said that, overall, she felt the march went very well. “I was glad that there was a good group, not too many, not too few. Also, we got very good feedback from the cars driving by and the people on the sidewalks. It was kinda cold but we all know how to handle cold.” 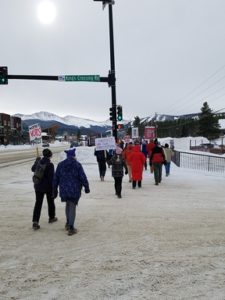 The first Women’s March took place on January 21, 2017, following the inauguration of President Trump. A worldwide protest, tensions rose due to his statements, considered by many as anti-women or otherwise offensive. It was the largest single-day protest in U.S. History. The March has now become an annual event held every January as a platform not only for women’s rights, but for human rights. The theme of this year’s March was “Our Vote is our Voice”. A rally will be scheduled later this year to promote voter participation in the 2020 election.

Baird said she has plans to organize another march next year.