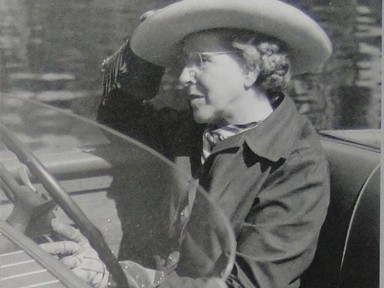 From 1933 through 1954 Grand Lake summers were graced by a “one woman Chamber of Commerce”. This unique character was Louise Millinger, operator of the Grand Lake Boat Service.

The Boat Service was started by her father, Captain McCarty, in 1909 with some canoes and one cylinder motorboats for the “wagon trade”. Louise and her husband Clem took over the business after the Captain’s death in 1933. Clem died suddenly two years later, and Louise, at age 49, continued doing what she loved. She spent her winters teaching at Minnequa school in Pueblo and writing fiction. From the day school was out until the day it started in the fall, Louise was with her boats. She built the operation to six Chris Crafts, a 40′ steamboat “Micky”, and many small boats and canoes. She had shops capable of total motor rebuilding, and a heated and insulated hull refinishing shop. Her marina also included storage facilities, employee housing and an office.

When her lake shore clients wanted a new boat, they sent her to the factory to select the craft, have it transported and prepare it for launch. When the owners of Daven Haven Lodge ordered “Lady of the Lake”, she was told by the factory representatives twin engine craft would never be required on a small lake. After an education from Louise about the effects of altitude on internal combustion engines, however, Chris Craft knew they had met their match.

Few boats ever left Grand Lake in those days. When a boat’s useful life was over, it would be laden with pine boughs, saturated with gasoline, towed to mid-lake and ignited.

Mrs. Millinger continued a tradition started by her father. Vesper services were held on the lake shore every Sunday evening during the summer. She would have a large bonfire on the beach. These services were nondenominational. Louise would have a piano loaded onto a truck and brought to the beach for music, and often the bell ringers would also play. The services would close with a trumpet soloist from across the lake playing taps.

Louise was a Director of the American Power Boat Association, and a popular public speaker for the association. She always urged people to visit Grand Lake, and “See the Top of the World from a Boat”. With her hectic work life, one of her favorite things to do was paddle out to a special spot on Grand Lake and just be still.

In 1948, Ralph C. Taylor wrote in Rocky Mountain Empire magazine, “Louise Millinger gathered as much fame in one generation as the lake did in 6 million years.” Louise died in March 1985 at age 99. The “Lady of the Lake” lives on to this day, winning prizes in antique boat contests.