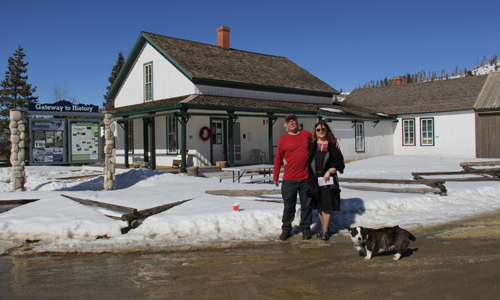 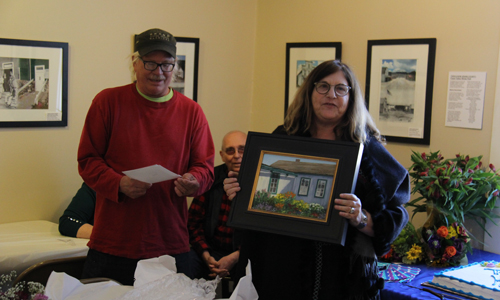 I recently had the opportunity to sit down with Cozens Ranch Museum Director, Kristi Martens, who had announced she’ll soon be moving on to pursue other interests.

When Grand County Historical Association (GCHA) hired Martens for the manager job at Cozens Ranch Museum in July 2011, she recalls being placed on a 90-day probationary period. She thought that was fair since she’d never before worked at a history house museum like Cozens.

Martens was otherwise well-qualified to work for GCHA.  She had earned an MA in Museum Studies, and a PhD in Anthropology and specialized in museum collections. She had applied for and received many state and federal grants, worked in exhibits and programs for decades at the Denver Museum of Nature and Science, Museo de Las Americas in the Santa Fe Arts District, and at Foothills Art Center in Golden. With her background in prehispanic cultures, Dr. Martens had developed bilingual exhibits and catalogs for the Metropolitan Museum of Art in New York and for the Chicago Art Institute and she also served on boards in Colorado’s museum, art and heritage communities.

Still, she had a lot to learn when she arrived in Grand County. She told me that she was grateful to be hired, because, at age 58, she felt she was considered “over the hill” for most museum jobs. Dr. Martens understood the need to generate revenue and increase attendance at a museum that had been closed for over a year due to a lack of resources.

With the tireless efforts of GCHA, Cozens Ranch opened as a museum in 1991. Cozens had undergone many iterations since its 1874 founding, when it became the community center of the Fraser Valley with its restaurant, hotel, post office and shop. A good Catholic, Mary York Cozens bequeathed the entire ranch to her beloved Jesuits of Regis University. It became Jesuit property in 1937. The good brothers of Regis turned the ranch house into the first Catholic Church in Grand County. Kristi tells me that many residents still recall attending services in the building.

When the Jesuits built their own St. John’s church across the Fraser River on inherited land, GCHA stepped in and negotiated ownership of the one acre site. By then, in 1987, the main building had become dilapidated. GCHA’s first task was to save the homestead and place it on the National Register of Historic Places.

Dr. Martens recalls early presentations she gave to the Fraser Valley Lions and Rotary Clubs, where she visualized a future where Cozens would return to its glory days as a central hub for the Fraser Valley. As it turns out, that’s just what she’s accomplished in less than seven years.

Her first task was to protect the museums’ precious collections. She wrote, received, and implemented a federal grant from the Institute of Museum and Library Services. This grant helped to preserve and organize the artifacts and archives of Grand County history.

Dr. Martens led the effort to erect new signage for the museum. With strong support from the Town of Fraser, the Grand Foundation, and the Grand County Tourism Board, the signage went up in 2016. Cozens Ranch Museum was finally on the map, as the “Gateway to History” in Grand County.

In 2012, Dr. Martens, with a star team of volunteers including Mike Turner, Betsy deVries, Mary Amann and Greg Gallavan, initiated the first Taste of History. In 6 years, the Taste of History has raised more than $150,000 to “keep Cozens Ranch Museum open!”. Through this fundraiser, she established corporate connections with Rendezvous Foundation, Winter Park Resort, C Lazy U Ranch, Drowsy Water Ranch and Devils Thumb Ranch and Resort. Each year, more than 100 businesses have given to the Taste auctions, and 20 local restaurants also support the museum with donations of wonderful ‘tastes’ for history.

A call from the NYC PBS show, “Mystery at the Museum,” motivated Kristi and her volunteers to upgrade, paint and re-do the more than 20-year-old labels and exhibits at Cozens Ranch Museum. To improve the filming experience, she worked with the Grand County Characters and Kathy Naples to develop the ‘mystery’ of Doc Susie for the 2013 show.

Next for Cozens, Dr. Martens arranged a cultural exhibit on the Ute Indians titled “Winds of Change: Utes in the High Country.” She arranged loans of Ute materials from the Ute Museum in Montrose, History Colorado, Denver Museum of Nature and Science, and the University of Wyoming. She brought in local experts as advisors, including Tyson Arnold, Linda K. Rogers and Ken Ball. She reached out to regional Ute groups and arranged a presentation about the traditional Bear Dance and a trek to the local Ute Fort. Grand County enthusiastically embraced the Ute programs, including the authentic Pow Wow with youth dancers, and the blessings of the Ute tipi by a tribal medicine man.

Over the years, Martens supported the arts in Grand County with her participation in the Grand Creatives and Fraser’s Public Art Committee.  She started with local artists ny selling their plein air artwork in the Cozens Gift Shop. Kristi then moved to establish a gallery in the museum, where dozens of artists have since shown their work. She partnered with Artists Out of Thin Air to host their 2016 annual show, drawing work from 61 artists and hosting over 300 guests at the opening reception. In the past year, artists Marie Johannes and Trine Bumiller have also had solo shows at the Cozens Gallery.

Kristi partnered with the Grand Quilters in 2013 for an exhibit of 100 quilts, antique to contemporary. The quilts were especially popular. At the time, she started a free Heritage Arts Day for local families to learn and have fun. Every year, the museum also hosts a free Christmas at Cozens for local children and families.

The 2017 version of the Grand Quilters was even more successful. Again, the local quilters transformed the museum with their incredible talents. This time, Kristi teamed up with Betsy deVries to start the Grand Quilt Trail, a national initiative honoring women’s rural arts. Begun in June 2017, the Grand Quilt Trail already has 98 colorful painted quilt blocks on public buildings throughout the county. The Quilt Trail benefits GCHA, and will continue under the leadership of Betsy deVries and Mary Amann. To find more information, including a copy of the 16-page color booklet to download, log-on to: grandcountyhistory.org.

From 2014 to the present, Martens joined with Mark Afman and other area photographers to produce a county-wide Then & Now set of exhibits, with 88 framed photographs on display throughout the county. Funded with grants, the project was the impetus for Martens’ latest project, Go Grand: Seven Tours of Grand County History. She worked with other members of the Heritage Coalition and various artists and photographers to complete the project.

Dr. Martens told me that the Go Grand book summarizes what she has learned about Grand County in her six years with GCHA. She is especially proud of the inclusion of artwork by 55 local artists and photographers, including her Then & Now friends, and of generous scholarly input from colleagues throughout the county.

At age 65, Kristi feels the time is right to leave GCHA and return to her roots. She looks forward to spending more time with her husband of 33 years (and Cozens’ main volunteer), Steve Martens, her welsh cardigan corgi, Khaleesi, and her granddaughter Eleven Nai’a (Cozens’ favorite docent). She plans to take the opportunity to transform her PhD dissertation on the origins of tequila in Jalisco, Mexico into a beautiful coffee table book that can be enjoyed with a tumbler of tequila.  She sends a warm toast of gratitude and appreciation to her Grand friends, volunteers and supporters. We look forward to welcoming Kristi and Steve back in a few years for a book signing and tequila tasting.