At the November 6th Town Council meeting, Old Town Neighborhood Committee representative, Gigi Dominguez, came forward with an update on Phase 1&2 of the project. She told the council the new bus shelter still does not have a roof, and, now that it’s snowing, she encouraged the town to get the roof on as soon as possible. The plans for the roof had been revised, changing from a proposed wood roof to tempered glass. The added expenses, totalling $20,927.34, were on the evening’s agenda for approval.

Dominguez told council that there was continued frustration among Old Town residents and it was “affecting their confidence in the Town’s ability to get the project done”. Citing street lights, signage and flowers as things that didn’t get done this summer, Dominguez asked council for their support in completing Phases 1 and 2. She noted that Town staff had been very cooperative, but clarified she was here to say “let’s get it done”, emphasizing, “everything needs to get done”. Daylight Saving Time has escalated the need for functioning street lights, as it is “really dark”, she said. Capital Projects and Parks Director, Gerry Vernon, told council that the street lights are expected to be completed by mid-December. Transit Manager, Michael Koch, confirmed that a transit map would be placed in the new shelter.

Vernon told Dominguez and council that whatever they did not get completed by the end of the year would be completed as soon as possible in 2019. 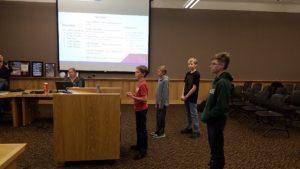 Members of East Grand Middle School presented an overview of the First Tech Robotics Challenge Team to the council. Team members had sent between 40-50 handwritten requests for funding to various entities, and the town had added them to the November 6th agenda for consideration.

Two members from the Metal Minds (Team #13879), and two from the Gadgetrons (Team #15289) talked about their teams and their upcoming challenge, Rover Ruckus. The teams build and program robots, which they enter in regional competitions, potentially qualifying for state and world championships. The request for funding would help them purchase parts needed to build their robots (costs ranging from a few dollars to over $600).

When the presentation was completed, Mayor Jimmy Lahrman told the students “I applaud you for advocating for yourselves, this shows true leadership”.

Councilman Chris Seemann added that he supported funding the teams, “but I want to see a demonstration”.

The council unanimously approved support for the teams, in the amount of $500, with the caveat that a “community demonstration” of the team’s creations would take place after their competitions in the spring.

After unanimously approving the Consent Agenda, which included the additional funds for the Old Town Project, council moved on to Resolution 1658, the Transit Intergovernmental Agreement (IGA) with the Town of Granby. Transit Manager, Michael Koch, told council he’d been working with the Town of Granby for quite some time and was pleased that they’ve entered into an agreement just as the Regional Commuter Line moves to a year-round route.

Koch told council that by adding the year-round regional route, the system is stronger as the new Transit Facility is planned and better positioned to seek funding options. “This will impact how we all move through the community”, said Koch. Council unanimously approved Resolution 1658.

Town Manager, Keith Riesberg, walked the council through the 2019 Budget presentation. Riesberg extended his thanks to Bill Wengert for having a hand in the preparation of the document prior to his departure.

Sales and Lodging Taxes are the largest recurring source of revenues at 26%. The Certificate of Participation (COP) for funding the planned public works facility is at 40%.

The Town plans to use 54% of the 2019 budget dollars for Capital projects, totalling $16.7 million. The remainder will be put toward Economic Development, Transit, Public Safety, Parks & Trails, Streets, Housing and General Funds.

Riesberg pointed out that the town’s “recurring revenues are higher than recurring expenses, which puts the town in a great position”. He also noted the town’s personnel costs have not been growing at the rate of revenues, which looks favorable when compared to comparable communities.

Riesberg told council the town has good reserves, is in compliance with TABOR and the fund balance will be drawn down in next few fiscal years. He added that no economic downturn is anticipated and increases in revenue are projected.

Mayor Lahrman stated “the town’s revenues are unbelievable”, adding that the town has doubled its sales tax collections in the last ten years. “We are in a strong financial position, giving us flexibility to invest in our community.”

The final budget will be submitted for adoption at the November 20th meeting.

Town Clerk Danielle Jardee reviewed the 2019 meeting schedule with council, and they agreed to move the January 1st meeting to January 8th, and the second meeting that month would take place on January 22nd.

In regard to workshops, council was asked if they would prefer moving them to 3 pm, when an evening meeting is scheduled. Council seemed to agree that it would be more productive to have the workshop prior to the meeting. Councilman Periolat said he preferred this and Councilman Seemann agreed, saying “a condensed schedule is preferable”. Council also discussed moving the meetings to evenings only, which is allowable by amending the Adopted Rules. Riesberg told them he would bring something formal to the next meeting for council to review.

To learn more about the Town of Winter Park, visit wpgov.com.