At the September 18th Town Council meeting, the meeting opened with unscheduled public comment and an update from Old Town Neighborhood Committee representative Gigi Dominguez. She told the Council the new bus shelter has now had glass installed, but the roof is still missing. She added that the bases for the new street lights are in, but the poles have not yet been delivered and she asked whether the project would be completed before winter.

Town Capital Projects, Parks and Trails Manager, Gerry Vernon, stated they are “eagerly awaiting delivery of the poles, which should be in any time”. He told her that Power to the People electrical will do the install and hopes to be done by the end of the month. “It goes pretty quick, once the poles arrive”, said Vernon.

Chamber Executive Director, Catherine Ross, told Council that their final summer event, FallFest, was very successful. This year’s event at the Rendezvous Event Center had participation from both Grand Kids and the Fraser Creative Learning Center, who are in the process of merging. They raised a lot of money, with help from the Grand Foundation and the Grand County Blues Society. “It was a beautiful weekend for Fall activities”, said Ross. 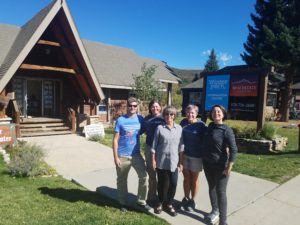 Ross also reported that Oktoberfest had sold out all 600 mugs, but they had enough beer. “We finished summer strong, with lots of people in town.”

The new Winter Park brand had a soft launch, primarily resort-focused, the previous week. They have regrouped with funding partners to continue to implement the new brand formal launch on November 1st.

The Chamber expects to have their final budget numbers in the next few weeks and expects to request an amendment to their budget, which includes the move costs.

The Chamber has relocated a few blocks to the south and is now located next to The Perk Coffee Shop, sharing space with Real Estate of Winter Park. Ross told Council she expected they would be operational at the new location by the end of the week. She added, “The moose is going to stay, regardless. It may go into ‘hibernation’ until the new facility is finished, but it will stay”.

Director of Parks, Recreation & Golf, Scott Ledin, told the Council it has been a great, extended summer. Pole Creek Golf Club has had a really good season. They’d just had 50 teams for the Bert & Ernie Golf Tournament and several more tournaments coming up. The course’s own Superintendent’s Revenge in October will help fund the cost for greens covers.  Overall, “the course is in fantastic shape”, said Ledin. He added they’ve had a very strong season due to lack of rain days/late afternoon showers.

At the Sports complex, youth soccer has started up. The Fraser complex hosts all the youth clubs from the county.

Over Labor Day, the Doubles Volleyball Tournament had close to 85 nets set up and over 240 team and believes they can probably get 350 or more next year. They also had 17 teams for the Kickin’ it to Cancer Kickball Tournament as well.

The Ice Rink project is also moving along. They’d made a change order and expect equipment to be delivered the week of October 22nd. The “building structure, meeting room and locker room are coming along nicely”, said Ledin. They have had a lot of volunteer contractors, hockey dads and adult league members helping out and it’s coming along really well. They hope to have ice by the first of November.

Next, Ledin updated Council on the Foundry Cinema and Bowl, who’d approached the Rec District with options to lease or purchase the facility. A Rec District Board meeting was scheduled that evening and they encouraged feedback from members of the community. “The staff has spent a lot of time digging into this”, said Ledin. “The decision ultimately resides with the board, but if you’re interested, please come in.”

Councilman Myers asked whether there had been any pushback from Fraser? Ledin told him that both the Mayor and Town Manager support the project.

“There are some benefits that could make some sense”, Ledin stated, adding “Title 32 limits special district powers on activities such as roller skating, mini-golf, amusement park/water park and bowling alleys”. This could require Board of County Commissioners approval. The board’s decision will dictate next steps in the process.

Town Planner, Mara Owen presented six application Resolutions for Commercial Enhancement Grants that had previously been reviewed and approved by the Planning Commission on September 11th to the Council for approval. The program allows an amount up to 50% of a proposed project’s total cost.

Resolution 1637 is for the Lavender Elephant, located in the Park Place Center who had requested $14,607.50. Owner, Abbie Samuelson, and Tim Hodsdon of design firm, SALTworkshop, presented an overview of the project which includes a seasonal outdoor deck and pergola, and installation of a ramp or stairs. After Council discussion, the full amount was approved.

Resolution 1638 is for the Winter Park Center, submitted by business owners of the center. The amount requested is $11,000. Jeremy Henn of Uptripping told Council they are requesting to replace the “1980’s strip mall sign”, and do some landscaping and lighting work. After Council discussion, the full amount was approved.

Resolution 1639 is for Pine Tree Plaza in the amount of $2,148.50. Representing the property, Michael Koch told Council that, when US 40 was widened, a lot of trees along the road had been removed, but nothing was replaced. They are looking at “basic landscaping improvements to make space look more approachable”, said Koch. After Council discussion, the full amount was approved.

Resolution 1640 is for Winter Park Plaza in the amount of $80,803.  Tim Hubbard, owner of Rudi’s Deli and building owner, Eric Swanson described the project to Council. The plans include replacement of the deck at the north end. The new deck will cantilever over Idlewild Spirits, move the stairs to the north, and, replace the metal ramps in front of the building with one even, ADA compliant, sidewalk. In 2017, they had submitted an application for the deck and were denied by the Town, who asked for a complete submission including the sidewalk component. According to Swanson, the cost for the sidewalks is about $82,000 and the cost of the deck is about $74,000. Council felt that some of the sidewalk expense was deferred maintenance and ultimately approved $37,000 for the deck and $21,000 toward the sidewalk, totalling $58,000. “Your effort does not go unappreciated”, said Mayor Jimmy Lahrman.

Resolution 1641 is for the new Stoked Meeting House who’d requested $34,628.  Owner Andras Horanyi told Council that he’d needed to do a lot of renovations to make the building safe, including major roof repairs to properly handle snow melt. His goal is to update, but maintain the historic aspect of the building. The old Mountain Rose sign will be repurposed as a community table inside, the ceiling will be vaulted and when completed, will support several small businesses. The grant is requested to help with costs associated with exterior improvements. These include an enhanced concrete area, lighting, umbrellas and seating, north side gardens and fencing, a bike wash station, decorative shutters, window boxes, fencing, planter boxes, concrete walks, and bicycle racks. He told Council he hopes to be open by Thanksgiving. After Council discussion, the full amount was approved.

Resolution 1642 is for the Village Center and Condominiums. The HOA requested $85,000 to make improvements and extend the deck in front of the Peak Brewery, add a ramp, firepit, deck rail, and flower boxes, improve the main entrance walkway and lighting. While some Council members felt approval should be conditional upon the applicant adding landscaping elements to the property to the north, which is not owned by the HOA, they ultimately approved the full amount requested.