Tuesday night’s meeting, the first of the new year, saw most council members present with the exception of Councilmen Chris Seemann and Chuck Banks. Banks called in to attend the meeting remotely.

The Winter Park & Fraser Chamber and Devil’s Thumb Ranch submitted an application for the 7th annual Stagecoach Classic cross-country race on January 25, 2020. The 30K/15K race will begin at Devil’s Thumb Ranch and traverse through the old Idlewild Ski Area to finish at the Rendezvous Event Center where there will be a DJ, beer and lunch for the racers. 300-500 racers are expected to attend.

Winter Park Resort had submitted an application for their upcoming Family Firework Nights set for January 18 at 6 pm, February 15 at 6:30 pm and March 14 at 8 pm. The event will feature a bonfire at the base of the resort and fireworks at dusk.

Resolution 1742 set the dates and times for Town Council meetings and workshops, which will be held the first and third Tuesday of the month. Workshops will begin at 3 pm and meetings at 5:30 pm. The only exception will be Tuesday, April 7, which is Election Day. Town Clerk Dani Jardee recommended council cancel the meeting, since Town Hall is an official polling place, and set a ceremonial meeting/swearing in of newly elected council members before the meeting on April 21.

Resolution 1743 fulfills the annual requirement to set the bulletin board in Town Hall as the official notice posting site. Jardee stated she also posts all notices on the town’s website as well.

Community Development Director James Shockey presented the first reading of Ordinance 529, an Ordinance approving the vacation of a 25’ unnamed right of way east of US 40.

Fraser River Development Company (FRDC) had requested to vacate the unnnamed right-of-way(ROW) that is located north of the new platted Ski Idlewild Road and adjacent to Roam Filing 1, Parcel A. The right-of-way is approximately 1,973 sqft. and does not include any existing improvements or utilities. The small piece of ROW is no longer required for access or circulation, since Ski Idlewild Road is being extended to provide automobile and pedestrian connectivity and will be dedicated to the Town of Winter Park.

The ROW was originally dedicated to Grand County in 1937 and became part of the Town in 1978 when it was incorporated. That portion of ROW has never been used for access or utilities since original dedication.

Section 8-1-5 of the Town Code outlines the methods and procedures to vacate a street in the Town of Winter Park. The code requires a Public Hearing before the Planning Commission and Town Council. If the street vacation is approved, the Council must adopt and record an ordinance noting such vacation.

The first reading was unanimously approved. The second reading is set for the next meeting on January 21.

The proposed construction contract will complete the following improvements:

Riesberg told council the contract reflects an April 1 date of completion, but the goal is to complete the project by the end of February to accommodate spring break visitors. He added the contract is a “not to exceed” amount of $155K. Any savings would be returned to the town. Council approved Resolution 1745 unanimously.

Town Manager Riesberg next presented Resolution 1746, a Resolution approving a contract for the installation of a Snow Melt System at the Cooper Creek Way Transit Center.

The contract is also a “not to exceed” amount of $145K, with any savings being returned to the town. Council approved Resolution 1746 unanimously.

Town Manager Riesberg told council they would soon be launching a resident survey similar to the survey the Town of Fraser recently put out, to ascertain resident’s interest in allowing use of OHV’s on town roads. Riesberg stated he anticipates discussion of results at the February 4 workshop and potentially drafting an Ordinance.

The Town will host the first of two informational sessions on Wednesday night, January 8 at The Perk and January 15 at Winter Park Town Hall at 5:30 pm. Residents interested in learning more about how town government operates and running for a council seat are encouraged to attend. 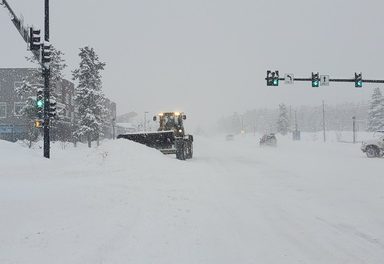