The Shining Stars Half Marathon and 5k fundraiser will take place on Saturday, August 3rd from 8 am – noon. Staging for the event will be at Grand Park. The half marathon route will travel clockwise through the town of Winter Park on King’s Crossing, Forest Trail, Vasquez, CR 725 (Sunken Bridges), CR 72 and connecting with the trails in Grand Park. The 5k will utilize Grand Park trails. The event is expected to draw about 400 participants.

The Crooked Gravel and Sunrise to Sunset Mountain Bike Race comes to town on August 9-10. Staging will take place at the Rendezvous Event Center. Registration will take place on Friday and the races will start and finish on Saturday. The Sunrise to Sunset ‘Race the sun in the High Alpine’ course will utilize Rendezvous trails in a relay format. The Crooked Gravel ‘High Mountain Gravel Galore’ features two course options: a 68 mile or 97 mile route through remote gravel roads on custom ‘gravel bikes’. The event is expected to bring between 500-750 riders to town.

The Winter Park Beer Festival will also take place on August 3rd at the Rendezvous Event Center, from noon – 5 pm. The event will feature up to 40 different breweries and the Grand Foundation will benefit from some of the proceeds of the event. Between 2,000-3,000 are expected for this event.

The Headwaters Center applied for a blanket permit, to accommodate the various public and private events held at the Center between July and October 2019. Town Clerk, Dani Jardee told council the intent of the application was to “cover everything and rein it all in”.

The second reading of Ordinance 522, conveying town property to developer, Fraser River Development Co LLC, via Special Warranty Deed was approved unanimously. The town’s Charter requires the conveyance be done by ordinance. Town Manager, Keith Riesberg, said, “This will allow FDRC to move forward with the construction of infrastructure and their overall development.”

At their annual retreat, held on May 8th, Town Council discussed their priorities and objectives for the upcoming year. Since the retreat is held in the second quarter, the objectives serve to establish priorities for the next 18 months. Staff takes the objectives into consideration when developing the FY 2020 budget.

The twelve objectives identified at the retreat, in no specific order of priority, are as follows:

Manager Riesberg told council that staff would work on items concurrently, as resources allowed. He clarified that council is also able to amend the list at any time. “This gives staff direction on projects and development of the fiscal year 2020 budget.”

Resolution 1711, adopting objectives and priorities for 2019-2020 was approved unanimously.

Town Planner, Mara Owen, told council the filing might look familiar. The final plat for the original Reunion Station development had previously been approved in 2016. After filing three extensions, the plat had expired in February 2018. 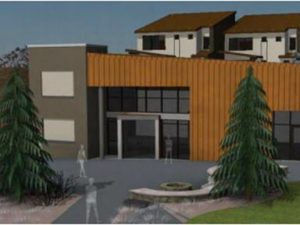 Located on .78 acres just north of the Post Office, between US 40 and Lions Gate Drive, developer Pete Gonzalez, Reunion DR1 LLC, proposes a mixed-use development consisting of four townhome units facing Lions Gate Drive, and a two-story mixed-use building planned for a 2,300 sf restaurant, 2100 sf retail/office space and four condominium units located on the second floor. A private driveway off of US 40 on the north side of the property, previously approved by CDOT, would allow access to the complex.

Plans for parking show a total of 33 spaces on property and propose the addition of seven parking spaces on Lions Gate Drive. The applicant is requesting a variance for the additional seven spaces required per town code.

The Planning Commission found that the high caliber of existing trees on the property allowed for a variance from the town’s landscaping code requirements. Snow storage, similar to the Arrow Development, would be hauled away within 48 hours of a snowfall event.

Concerns with snow removal in the tight space prompted Councilman Chris Seeman to ask, “Why wouldn’t we look at radiant?”

Owen stated there was no code requirement for radiant-heated pavement.

“It’s just going to be recurring, and will be difficult to remove snow ongoing,” said Councilman Seeman.

Due to the location of utility easements on the east side of the property, a 27’ setback will serve as a public amenity and extension of the commercial businesses occupying space on the lower level of the mixed-use building. With the possibility of future ‘undergrounding’ of powerlines, staff requested that the developer work with Mountain Parks Electric to determine if an alternate utility plan is possible.

Engineer Tim Gagnon, Bowman Consulting, presented a summary of the design changes submitted with the preliminary plat. The new design had gone from five 3 bedroom townhomes to eight 2 bedroom units, and they had added more commercial space. A mix of “wood, stucco, metal and steel design elements would blend in really well, architecturally”, said Gagnon.

It was also questioned whether the single dumpster shown in the filing would be adequate to serve 8 residential units and commercial space, which includes a 2,300 sf restaurant. Gagnon told council the space designed could handle both, allowing for recycle and 4 cubic yards of trash, to be picked up at regular intervals.

Mayor Jimmy Lahrman asked, “Will construction be phased or all at once?”

Gonzalez replied, “subject to utility discussions, they would be moving on the entire site at one time. Development would be slightly staggered, but not phased.”

Winter Park resident, Gary Behlen addressed council during public comment. “I think this is great, but a lot has happened since 2016.”  Behlen said he found the architecture to be “unremarkable” and not fitting to the newly adopted Imagine Winter Park Master Plan. “It needs more timber and stained wood.” Behlen also told the council he felt the traffic study, which had been completed in 2014, should be updated, because volumes had changed. On parking, he observed the town was “woefully under parked”. Recalling last year’s issues with Baker Drive, Behlen said, “This is under parked, and that’s a decision you have to make.” He also found the 5’ setback from Lions Gate Drive to be too small, the 3’ on the north side would need a maintenance easement, the landscape plans to be inconsistent, and, the drainage system along Lions Gate Drive to be inadequate, interfering with the natural flow.

Owen confirmed there would still be a design review that would go before the Planning Commission prior to the final plat. She agreed to discuss Behlen’s concerns with the town engineer as well.

Council next looked at Resolution 1713, a Commercial Enhancement grant for Fireside Market & Eatery. Submitted off-cycle, Fireside had submitted the application, hoping to complete the project by fall. Council agreed to accept the application due to a surplus in funds resulting from the Peak Brewing Company’s project reduction, freeing up about $40,000.

Fireside requested $12,500 in matching funds to add a new entrance on the west side of the building, realigning the patio and railing, an outdoor grill and a mural along the southwest side of the store.

Community Development Director James Shockey pointed out the addition of a door on the west side would improve pedestrian access and would likely draw additional people to the store. The mural, while yet to be designed by mural artist, Rumtum, could feature a lush mountain landscape made out of fruits and vegetables, adding color to a building section currently made up of large gray cement panels. The design would need to be compliant with the town’s sign code and reviewed prior to commencement.

During the review, Mayor Pro-Tem Nick Kutrumbos said, “This is the first time we have seen equipment as part of the grant request”, referring to the $999 4-burner natural gas grill.

Manager Riesberg suggested, “This may be where we want to specify things that are permanently attached.”

After discussion, the council approved Resolution 1713, awarding $12,500 to Fireside Market & Eatery with the stipulation that the funding be for permanent, attached improvements, minus mobile personal property. The motion was approved unanimously.

Council unanimously approved Resolution 1714, awarding the contract for improvements to Cooper Creek Way, in front of the new transit center south to Vasquez Road and east to US 40, to Anson Excavating. Based in Craig, Anson’s proposal came in significantly lower than the other bid received, but was still about 3% higher than the $542,610 budgeted, at $558,576, including an estimated $20,000 for a construction inspector.

Capital Projects Manager Gerry Vernon told council the improvements will provide appropriate pedestrian walkways and bus lanes and an island to allow two buses to offload in tandem. Vernon said discussions on the new transit center with CDOT and Greyhound have them “pretty excited”. A Bustang route through Winter Park and on to Steamboat could be a future possibility. “These improvements are critical to that next step.”

The developer of Hideaway Station, WPDC is required to install a sidewalk along the southern portion of Baker Drive, overlay pavement and install storm sewer improvements. The town will share costs for the northern section of Baker Drive, including pavement, on-street parking and a sidewalk, to be completed by WPDC’s contractor. The town budgeted $498,372 for the improvements. The contractor will get started in early August and expects to finish by October.