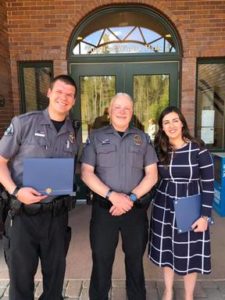 At Tuesday night’s meeting, Fraser Winter Park Police Chief, Glen Trainor recognized citizen, Werllin Fourcade, and officer Jeff Malchow for their successful collaboration which led to solving a series of sexual assault cases that occurred earlier this year. Chief Trainor told the council he was incredibly grateful for the relationship his department has with the community.

Fourcade, the Rooms Manager at a local hotel, reported the case to the Police Department and helped with language interpretation during the investigation. “I wish it would have been a different situation,” said Fourcade, adding, “I couldn’t close my eyes and pretend it wasn’t happening”.

Chief Trainor told the council that Malchow had worked with the District Attorney’s office on the case and was commended for the quality of his work on the investigation. Malchow thanked the Chief, telling him it was through his leadership and the community’s openness to letting them know when and where they need to be that made it successful. “This case would not have been filed without Ms. Werllin.”

A number of Special Event Permits were next reviewed and approved by council.

Tenant-managed nonprofit, Cooper Creek Square Merchants Association, submitted a permit application for their summer events calendar, which includes Music on the Square, Yoga in the Park, Ice Cream Social, Face painting, balloon artist and bouncy house, and their Labor Day Block Party. All events will take place in the Square and no alcohol will be served. Council approved the permit application and agreed to waive the permit fee, based on their nonprofit status in good standing with the Secretary of State.

Nonprofit Never Summer Race Productions applied for a Special Event Permit for the upcoming Never Summer Adventure Race 2019, a 24-hour race which includes paddling, trekking and biking starting at Monarch Lake the morning of June 22. The race travels from there to Devil’s Thumb Trailhead for the trek portion and the start of the biking portion which completes the final legs at Winter Park Resort overnight, finishing up the morning of June 23rd. Council approved the permit application and agreed to waive the permit fee, based on their nonprofit status in good standing with the Secretary of State.

Nonprofit Grand County Blues Society had submitted their application for the 17th annual Blues from the Top, set for Saturday and Sunday, June 29th & 30th. Held at the Rendezvous Event Center, the 2-day event highlights a weekend of Blues music, vendors, food and drink. Council approved the permit application and agreed to waive the permit fee, based on their nonprofit status in good standing with the Secretary of State.

Town Clerk, Danielle Jardee, stated the Fraser Winter Park Police Department had recommended reducing speed limits to 25 mph during festivals, due to heavy foot traffic, and, discontinuing allowance of glass in the venue on Thursday nights. The permit application for High-Note Thursdays indicates that glass will not be allowed.

Councilman Art Ferrari told council the Grand County Blues Society would be dedicating the John Catt Memorial Plaque shortly before 5 pm on Thursday, June 27th, ahead of High-Note Thursday. The plaque will be placed in the Rendezvous Event Center.

Since receiving the proposal, Owen told council the town had negotiated the costs down from $157,000 to $148,225. Therefore, the contract will be for an amount not to exceed $148,225. The Town had budgeted $100,000 in 2019 and will need to budget an additional $48,225 in 2020, when the Development Code is expected to be completed. Council approved Resolution 1697, awarding the contract to Kendig Keast Collaborative unanimously.

Council also approved Resolution 1698: granting an easement to Mountain Parks Electric to install conduit for fiber and electric within a town right of way; Resolution 1699: the Development Improvements Agreement standard form for Fraser River Development LLC; and, Resolution 1700: approval of a special use permit for Kona Ice to operate within public right of ways in the D-C zone district.

Town Manager, Keith Riesberg, presented council with an option which had been discussed during their retreat in May. Currently, the members of council appoint the mayor from within the elected pool of seven council members. Manager Riesberg told council that staff had done some research on spelling out the process to change how the mayor is elected, as written in Section 3.3 of the town’s Charter. He told them that, if they opted to put the question on the November 2019 ballot, they would need to notify the county by July 26th and finalize the language by September 6th. Three assumptions had been made regarding the change:

When the topic was opened for discussion, Councilman Chris Seeman stated, “It allows better governance to have an elected mayor. 80% of towns have elected mayors. Let’s let the voters decide.”

Mayor Jimmy Lahrman said, “I think we function well. I think it’s a question that takes up a lot of time and energy and I am not in favor.”

Councilman Jim Myers added, “The timing is not right”. He noted that they (council) have worked very well together and with a new town manager, he was concerned that somebody could come in with a separate agenda. “I would not support it and vote no.”

Councilman Art Ferrari noted, “The mayor would be another member of council. Anyone with an agenda would only have one vote. Letting the voters decide to think about if they want to elect the mayor has small risks.”

“I am trying to think down the road. I have been cultivated, being a part of the council and being given the leadership role. As Mike (Periolat) mentioned, we don’t have a large amount of voters to pull from”, said Mayor Lahrman. “I hear what you’re saying, looking at it from a different perspective. We’ve had a very stable environment that has allowed us to accomplish more and work better together, as opposed to bringing someone in. I like what we have accomplished the last 10-12 years.”

Councilman Seeman stated, “Why not let the people decide? Let the voters tell us.”

Councilman Myers reiterated, “The mayor has one vote. I don’t think the timing is right. It would be more disruptive.”

Mayor Pro-Tem Nick Kutrumbos said, “We are challenged with having diversity on the board. This is one step.”

Councilman Myers replied, “We are much more diverse than we used to be.”

“We have a good leadership team”, said Mayor Lahrman. “We don’t need to change or allow the public to change the way government is operated.” He estimated the average town election turnout was between 80-90 voters.

Councilman Charles Banks observed that several council had expressed that they would not be continuing beyond their current terms. “I know we’re going to have several new council members.”

Manager Riesberg clarified that there are two state initiatives and possibly East Grand School District and/or Grand County bond ballot measures on the November 2019 ballot. Voter turnout could not be known at this time. He told council he had worked under both forms of government and observed that a mayor that does not bring council members’ ideas forward would not be effective.

Councilman Myers added, “You can’t just change for the sake of change.”

During public comment, Winter Park resident Mark Adamczyk stated, “I don’t see any reason not to take it to the people.”

Councilman Art Ferrari motioned to create language and put the mayoral election question to the voters and Councilman Seeman seconded the motion. The motion did not pass with a 3-4 vote. Councilmen Banks, Myers and Periolat, along with Mayor Lahrman voted against the proposed ballot measure.

To learn more about the Town of Winter Park, visit wpgov.com.