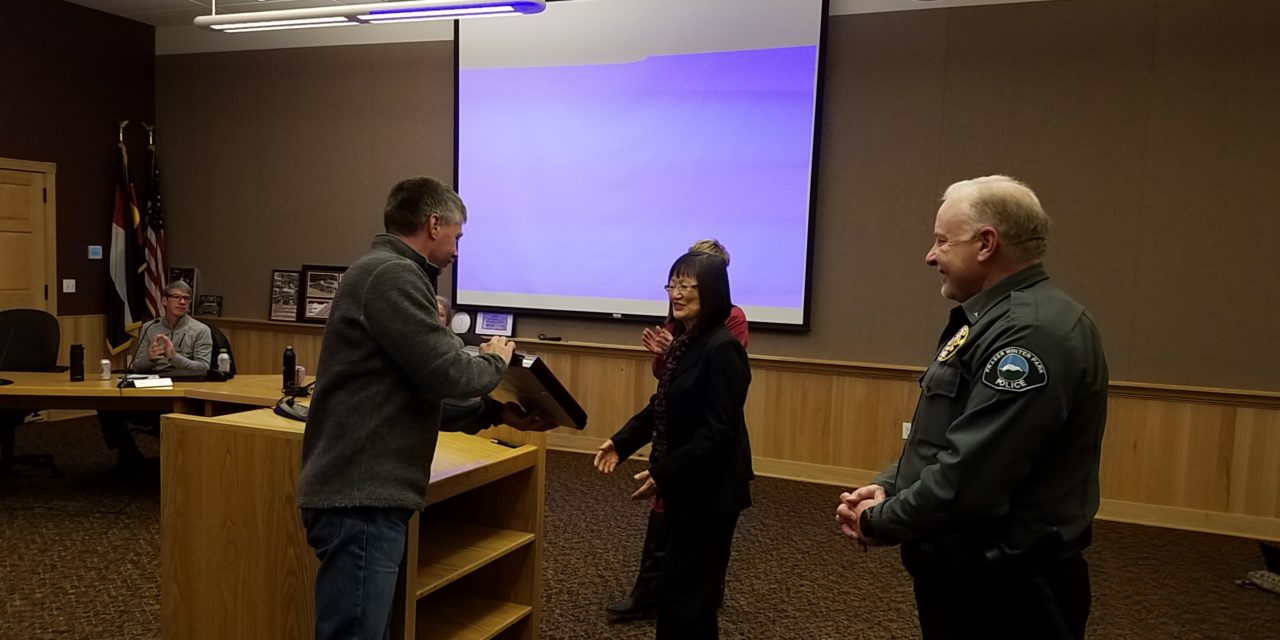 Tuesday’s Town Hall meeting opened with Fraser Winter Park Police Chief Glen Trainor and Mayor Jimmy Lahrman presenting an Official Proclamation to Georgia Noriyuki who had served as the town’s Municipal Judge from 2001 to 2018. “I cannot tell you the level of excellence we have achieved under Judge Noriyuki”, said Chief Trainor. “She has set the bar for municipal courts in Grand County. We are sorry to see her go and we wish her well.”

Council next approved the renaming of Clover Lane in the Slopeside development of Old Town to Kinney Way, honoring the developer, Tim Kinney and his wife, Jill. This was the second hearing on the homeowner’s request. It was noted that the new street signs would be ordered, with the Slopeside homeowners paying the cost of the new signs.

A recipient of one of the town’s 2019 Commercial Enhancement grants, Samuelson is expanding her current space in the Park Place Shopping Center and includes an outside deck and pergola in summer. Her plans include offering creative labs and other small events, such as paint & sips, which fits well under the requested Lodging and Entertainment License. Samuelson confirmed she would not serve alcohol regularly, only during scheduled events that would expand to the deck in summer.

Samuelson told council that as she completed the license application, after answering several questions, “I realized what I want to offer”. With a focus on educational and entertainment offerings, the “plan is to bring music, experts, paint & sips or canvas & cocktails”, said Samuelson. She went on to tell them “I am really excited about this,” saying that she had already had inquiries to book private parties and high school students that want to take classes. “I will go overboard training staff on alcohol intake”, she added.

With no public comment given, the license application was approved unanimously by council.

Transit Manager, Michael Koch, presented council with Resolution 1673: Transit Service Agreements with 14 HOA’s located in unincorporated Grand County. The agreements are signed annually, based upon the service provided by the town’s Transit system. Koch told council that most of the feedback he had received was positive, but the transfer at Safeway in Fraser has caused riders to have to adjust their schedules. Council approved Resolution 1673 unanimously.

Crone explained that, due to TABOR, the law prevents the town from giving the money to the corporation, so he is asking the town to loan the corporation $282,430, the maximum sale price allowable for the property. “The home is in superior shape and worthy of max price,” said Crone. “The pricing is just under 100% of AMI, which is still a really affordable price point.” Crone told council that it is the intent to sell the property and that notice had been sent to Hideaway Place residents. Crone told the council he had received 8 replies, 3 with pre-qualifications submitted.” Council approved the first reading and the second reading is scheduled for the next meeting, on February 5th.

Later, during Town Council items for discussion, Councilman Ferrari observed “We just bought a home to resell it. I am curious to know why the town does this? Why not step out from the middle and allow the homeowners to work the deal themselves?”

Crone replied that it allows for a rapid close. “With deed restrictions, it is very important the process is consistent”, said Crone. “If done in an open market, there are steps that could be missed.” The process is in place to facilitate an accelerated closing.

Mayor Lahrman added, “We are able to keep things moving, with John, it streamlines the program”.

Crone also updated the council on the town’s affordable housing wait list, which is now at just over 200.

Community Development Director, James Shockey, told council that, since the Public Hearing had been continued to the January 22 meeting, it was listed on the agenda. However, the developer had withdrawn the application, so no further continuation or action by council was required.

Adjacent homeowner, Kathleen Wheeler, asked council, “From here, to go forward, they would have to go back to Planning Commission?”. Mayor Lahrman confirmed, “A new, interested party would have to go through the whole process”.

Shockey presented Resolution 1675: a contract with JVA, Inc. for primary town engineering services and Bowman Consulting Group Ltd as secondary. “The standard contracts are approved in January each year”, said Shockey.  Mayor Pro-tem, Nick Kutrumbos, asked Shockey how long JVA had been the town’s primary engineering firm. Shockey told council it had been, at least, since 2008. Council stated they would like to put the services out to bid for 2020. Town Manager, Keith Riesberg, told the council he would look at what is required for the bid process. Council approved Resolution 1675 unanimously.