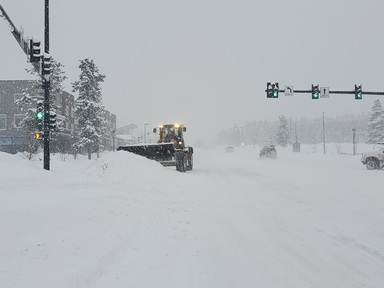 Photo: Winter Park Town Council expressed their gratitude to Public Works staff for their hard work keeping the roads clear during recent snowstorms. Manager Keith Riesberg asks for patience as they work to reduce the piles on street corners.      Photo by Mike Turner

At Tuesday night’s meeting, resident Linda Behlen approached the lectern during the Town Hall meeting. Behlen was following up on a discussion she had begun in October 2019 regarding bear-proof trash containers.

“At that time, you asked me to contact the Fraser/Winter Park Police Department. I met with Commander Ransom to address trash containers that were not bear proof.” Behlen said they read through the town’s code and found the definition of acceptable wildlife-proof trash containers and code enforcement to be ambiguous. She pointed out that it appeared the code had been written in 2008 and seemed outdated.

“Looking at the containers, a lot are probably not in compliance,” said Behlen. “I want to follow up, but I don’t know who to talk to now.”

Town Manager Keith Riesberg stated, “I need to understand what you are specifically looking for.”

“The ordinance says the refuse container should be certified by Colorado Parks & Wildlife. It must have reinforced plastic tops and two-handed operation, similar to containers over at Wolf Park, as opposed to containers with a flimsy top. With most containers I have seen, the bears can reach in and scoop the trash out. It’s a public safety issue,” said Behlen. “There needs to be education. They just roll stuff out and it sits there.”

Mayor Jimmy Lahrman said, “Obviously, the ordinance needs to be updated. Get with Keith and we can work with both trash companies.”

“Part of their licensure is that they (trash company) need to comply with town ordinances. There is somewhere on a different ordinance that says ‘if you have 2 complaints, then the police will send a letter’. It seems cumbersome and a lot of work for our police officers. Everybody should just have the containers,” said Behlen.

“We will work on how we bring it in and then work on the enforcement side of it,” said Lahrman. “We have more important things to do than have the police department checking on trash containers.”

“We checked on what services they could provide. It was quite a learning process to see what’s out there and what others are doing,” said Vernon, adding, “Ultimately, we selected to continue with JVA. Their rates are very competitive and their local presence is hard to give up. There is a lot of advantage to having them here.”

JVA rates came in at the low end of the proposals received, with hourly rates of $160 Principal and $132 for Project Engineer. Vernon recommended acceptance of the proposed 3-year contract term with 2 one-year extensions. JVA Principal and Civil Engineer Kevin Vecchiarelli attended the meeting to address any questions.

Mayor Pro-Tem Nick Kutrumbos asked if the three year term was what had previously been in place. Manager Riesberg explained the town had previously contracted on a year to year basis. He said ongoing relationships were beneficial to the town and there was great value to having a multiyear agreement.

Community Development Director James Shockey addressed council on Resolution 1752, a resolution approving a variance to the town’s parking requirements. He explained that parking had been recalculated when the Divide Board Shop had vacated the premises and the space had been converted to an event space for the brewery.

Per Section 3.9 of the Town’s Standards and Specifications for Design and Construction (Standards), the Town can permit a reduction in parking requirements if the reduction provides for a more efficient use of surface area with less land area devoted to parking. 22 parking spaces are required per the Standards; the property currently has 8 spaces available. If the parking reduction is applied, the required spaces are reduced to 12.

The applicant stated that a variance should be granted for the following reasons:

Shockey pointed out that the businesses are located downtown where on-street parking is currently located on US 40 and in close proximity to future on-street parking with the newly developed Ski Idlewild Road. The location is also on the transit route and within 350 walking feet of a public parking garage.

The Planning Commission had approved the variance without conditions at their February 11 meeting. They cited that the parking reduction conforms with the goals of the upcoming Downtown Plan, because it supports effective utilization of limited spaces and encourages use of underutilized parking facilities.

Mayor Pro-Tem Nick Kutrumbos said, “This particular property checks all the boxes. It is a short walk to the parking structure and bus stops.”

Council reviewed a request for reduction in the Commercial Enhancement Grant for Stoked Meeting House. Originally approved in the amount of $34,628, owner Mihaly Horanyi told council he had completed some of the improvements originally approved, but would not be installing french doors at the entrance or fencing the patio, due to the challenges presented. As a result, the request had been reduced to $12,464.63. Council approved the grant revision.