At the meeting on August 6th, several members of the community addressed the town council during the Town Hall meeting.

Old Town representative, Gigi Dominguez, expressed frustration with projects still to be completed. “This is a 2018 capital project that is still not finished,” said Dominguez. While the new street lamps have been installed, the old ones still have yet to be taken down. Minimal flowers and a lack of signage are also disappointments. “There is absolutely no signage for the Fraser River Trail. You’re mixing traffic with vehicles and it is not safe.” Dominguez added, “I have been told to stand in front of you. I am willing to stay on this, but who do I need to speak with?”

Town Manager, Keith Riesberg, told Dominguez he would follow up with staff and they would work with her.

East Grand Fire Protection District No. 4 Chief, Todd Holzwarth, told council the district is planning to put a question on the 2019 ballot for a revenue stabilization measure. The finalized verbiage will go before their board at the August 19 meeting. 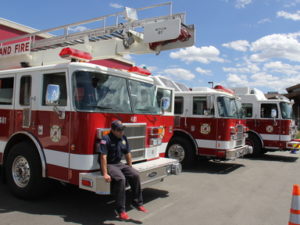 Councilman Art Ferrari asked, “Have you done a deep dive on a financial analysis to see whether the new housing and condos would impact your income?”

Holzwarth explained they get very little from initial residences at 7.15% of the mil levy value, plus impact fees. At 29% of the mil levy, he added, “I love commercial/business buildings.” But with over 80% residential in the district, revenue collections are low. The district operates on a $1.5 million budget, part of which is capital expenditures funded by their reserves. The goal of the measure is to add between $400,000-500,000 a year so that the reserves are not depleted. “We have the same funds as we had ten years ago. We can’t operate like that forever,” said Chief Holzwarth.

Zach Sawatzky, who recently moved into a home on Trestle Drive, asked the council to consider making changes to the town code to allow OHV vehicle travel on certain roads that access motorized trail routes.

“Side by sides are a really big go cart,” said Sawatzky. “They are safer, faster and more capable. Now that I am a resident, I want to drive my Razor around town. We use it for recreation and for fun.” Sawatzky told council he believed Winter Park and Fraser would be a great place to get some trail access. “I don’t think we need to change anything, but I’d love to add some trails. It’s easier than getting around by truck. I am not sure of the process, but I would rather get in front of it now. There are alot of us that would like to be able to drive our side by sides.”

Sawatzky told council that he had received a registration from the state of South Dakota for his Razor. “South Dakota is a friendly state,” said Sawatzky. They require the OHV have a horn, seatbelt, lights and turn signals. He added that the state of Utah reciprocates SD law. “You can drive anywhere, except for the interstate in UT, KS, WY, OK, NM”. However, Colorado does not reciprocate.

Mayor Pro-Tem Nick Kutrumbos asked if he had spoken with Headwaters Trails Alliance (HTA).  “It’s an interesting conundrum,” said Sawatzky. “I have worked a little bit with HTA, but I always hear that we are not an OHV-friendly community.”

“I would suggest you work out designated trails with unilateral support. It may help with the approval process,” said Kutrumbos.

Sawatzky said he had contacted the Colorado OHV coalition. The representative he spoke with told him ‘I am not from there. You need to get this started.’ Of 63 communities in Colorado with OHV access, Sawatzky told council he’d seen no resort communities listed.

Town Manager Riesberg said the topic was slated for a future workshop for input and guidance to determine whether it was something they wanted to consider. 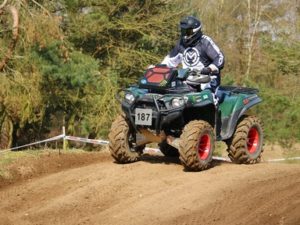 “The state has said it’s up to the county. The county says it’s up to the individual towns. Granby allows OHVs on certain streets, as does Hot Sulphur Springs and Grand Lake.” Sawatzky added, “It’s really about access.”

Mayor Jimmy Lahrman stated, “I am very supportive. We have talked about this for a year and a half. I agree we need to get out ahead of this. Glen (Police Chief Trainor) and his officers have a lot more to do than write citations for this. It’s in our best interest to accelerate this a little bit and work with Fraser. I see this leading into not only OHV, but snowmobile access in wintertime.”

Fraser Winter Park Police Chief Glen Trainor told council, “One of the issues we have had is that CR 8, CR 72 and CR 73 are not ATV routes in Grand County. Kremmling and Hot Sulphur Springs have ATV routes. In reality, the only place you could access in Winter Park is Vasquez Road. It would still be unlawful to drive on 72 and 73, because they are not ATV routes.” Chief Trainor added, “The county does this every spring – designate OHV routes. Somebody has to go and request the routes be made part of it.”

Manager Riesberg said the topic would be added to an upcoming Workshop agenda.

Whiskey & Wings – August 31 and September 1, from noon to 4 pm in the Village at Winter Park Resort.