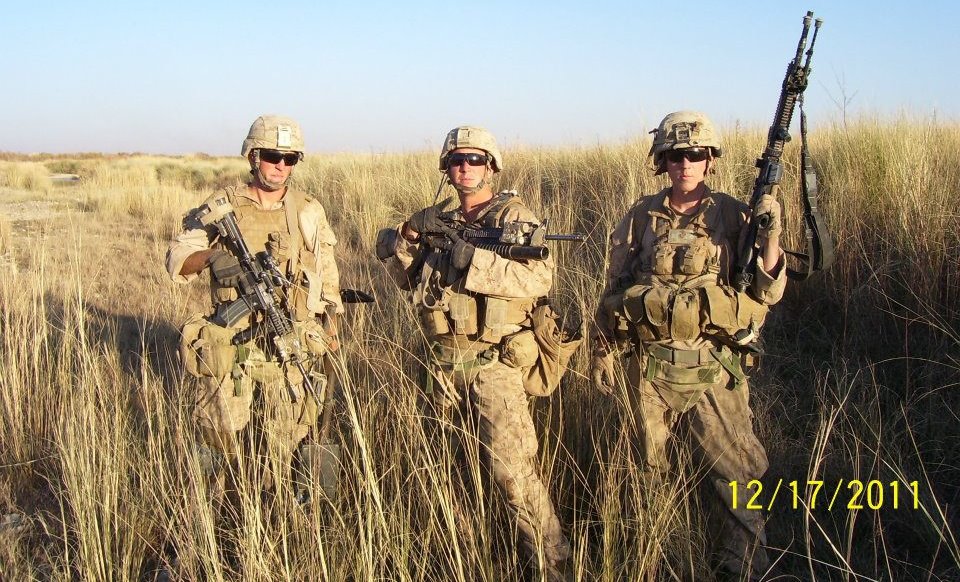 The story of U.S. Marine, PFC George Kellogg 3rd Battalion, 7th Marine Regiment (3/7), 1st Marine Division, India Company is a unique story that is still a work in progress.  I sat down with George to get a better understanding of his journey and what might lie ahead for the talented 20 something from Texas.

The second phase, from 2002 until 2008, was marked by a U.S. strategy of defeating the Taliban militarily and rebuilding core institutions of the Afghan state.

The third phase, a turn to classic counterinsurgency doctrine, began in 2008 and accelerated with U.S. Pres. Barack Obama’s 2009 decision to temporarily increase the U.S. troop presence in Afghanistan. The larger force was used to implement a strategy of protecting the population from Taliban attacks and supporting efforts to reintegrate insurgents into Afghan society. The new approach largely failed to achieve its goals. Insurgent attacks and civilian casualties remained high, while many of the Afghan military and police units taking over security duties were not prepared to hold off the Taliban. By the time the U.S. and NATO combat mission formally ended in December 2014, the 13-year Afghanistan War had become the longest war ever fought by the United States.

George Kellogg joined the Marine Corp at the backside of the Afghanistan War in the third phase of the conflict.  Fresh out of boot camp, Kellogg was deployed to Afghanistan with the 3/7, 1st Division, India Company. President Obama ordered a surge in 2009 that continued to increase through 2011 when roughly 140,000 foreign troops operated under ISAF and U.S. command in Afghanistan. Of these, 100,000 were from the U.S., including Kellogg.

Not long in country, on his first deployment while on patrol, Kellogg’s unit ended up taking fire from a sharpshooter. Kellogg talked about the reality of “50/50 survival” in those situations saying, “All you hear is whip, crack and a thud that sounds like a sack of potatoes hitting the ground”.  You look around and the guy next to you is dead, “in an instant, everything changes”.

Snipers were a part of everyday life while on patrol. The Taliban couldn’t match our fire power or weaponry so they used guerilla tactics targeting small groups, outposts and patrols. Kellogg added, “The worst was the IEDs, they were pretty much everywhere.”

An IED is a bomb constructed and deployed in ways other than in conventional military action. It may be constructed of conventional military explosives, such as an artillery shell, attached to a detonating mechanism. IEDs are commonly used as roadside bombs. An improvised explosive device (IED) became an effective weapon in the Iraq War and became a trademark in the Afghanistan conflict. In the second Iraq War, IEDs were used extensively against US-led invasion forces and by the end of 2007 they had become responsible for approximately 63% of coalition deaths in Iraq. They are also used in Afghanistan by insurgent groups, and have caused over 66% of coalition casualties in the 2001–present Afghanistan War.

Some 3,043 people were killed or injured by IEDs in 1,143 incidents in Afghanistan between the beginning of April and the end of June 2017, according to internal slides from the Department of Defense obtained in an open search query.

On July 27, 2010, at 19 years old, Kellogg’s life was forever altered when a fire fight broke out and  a large IED was discharged, sending out a huge shockwave and shrapnel ripping through the squad. The bomb was part of a chaotic fire fight and Kellogg recounts the moments of chaos and confusion. “Instantly you taste fuzzy!”, a term used when soldiers get hit by concussive explosives. Kellogg said, “you see sound and hear light as you slowly regain your senses but everything is jumbled.”

“As I came to, I knew I had to fight or die,” adding, “War is real. Chaos is real. There is no stopping. It is kill or be killed. Surviving the enemy contact is all that matters at that moment.”  A comment that hit home was, “The worst part of war is when the fire fight ends, the crying and screaming begin.” 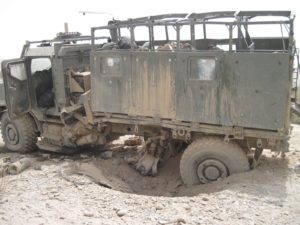 Dazed and confused, Kellogg realized he was badly injured, he spit up a couple of teeth and pulled a piece of shrapnel from the inside of his mouth that had torn through his face and jaw. An injury that has yet to heal completely more than 8 years later.

The fire fight was only part of George Kellogg’s story. He was transported to a San Diego medical facility for multiple surgeries and treatments and after months of eating pain pills like candy, he became hooked on opiods. After he was cleared for combat many months later, and completely addicted to opiods, he was ordered back for his second deployment in Sangin, a town in Helmand province of Afghanistan. The military would not issue any more pain meds so Kellogg turned to marijuana to ease the pain.

A few months into his second deployment he was called in for a random drug test and popped  positive for THC. He was discharged from the Marine Corp just 45 days before his service contract ended. He was discharged, hooked on drugs and needing medical attention for the injuries that earned him the Purple Heart in his first deployment.

You would expect the worst at this point, but Kellogg decided to get off the drugs on his own and he moved on in life. Kellogg said, “I actually felt better once I was off the drugs, almost free.” As he worked to clean up his act, the system started beating him down. At times, the Veterans Administration Hospital services were almost impossible to navigate. “They did just enough to help me but it was a struggle, you are just a number to them.”  Kellogg said, “I was without teeth longer than I was in the service” Even today, he has medical needs that are not being met by the system.

If all of this was not enough, life dealt another blow to George Kellogg. While riding his motorcycle on a freeway in Houston, a driver swerved across three lanes of traffic, causing an accident that eventually took Kellogg’s left leg.

To say George Kellogg has been faced with adversity, would be a monumental understatement. “I could lay around and do nothing day in and day out, but life is what you make of it.”  Kellogg said, “there is much to live for and the journey is real. Embrace it. Enjoy it for what it is and what you are dealt.” 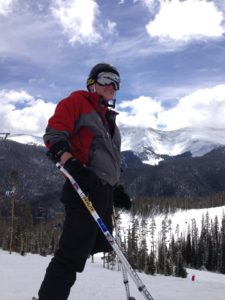 Kellogg has always been an active person. He grew up playing sports, skateboarding and surfing. After losing his leg, he was introduced to three track skiing by the Wounded Warriors Team at a summit in Aspen, Colorado. “I absolutely fell in love with it. Skiing is a type of freedom!.”

George Kellogg wants to compete on a world stage and has set his sights on the next Paralympics. His goal is to train with the National Sports Center for the Disabled and become one of the top disabled athletes in the world.  He said, “One day I would like to find a mountain that doesn’t have a disabled skiing program and help them build a program from the ground up.”