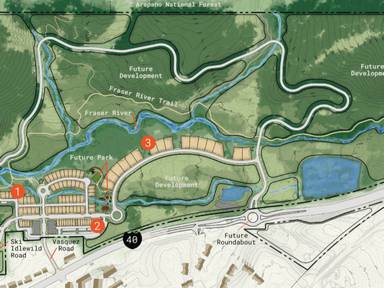 For the last few years, the Winter Park community has watched as the proposed Roam development has gone through the acquisition, design, public comment, annexation, preliminary plat review and approval processes. Located on two parcels at the south end of the town of Winter Park, the 172 acre parcel proposes a mix of residential and commercial development in a twenty year buildout period. When complete, the development will consist of 1,076 residential units, 400 lodging units and 72,000 s.f. of commercial space.

Architect Jeff Vogel told council there were a few changes to the original plans. The Fraser River Trail extension had been moved further east to better accommodate the wetlands, and they had replaced the right in/right out with a roundabout, since Vasquez Road will be extended in to the development. All in all, the changes improve connectivity, said Vogel. He told council he had worked with East Grand Fire District No. 1 and they were excited about having parallel access. Vogel told council he had two interested builders ready to start work on the project as soon as possible.

The Roam Development has begun selling 16 riverfront lots (#3 on map) and will soon add sales of the cottages (#1 on map) and townhomes (#2 on map) included in the first filing. According to the website, roamwinterpark.com, the ‘In-town Homes’ will start in the $700s.

Included in the first filing is the extension of Vasquez Road, adding curb and gutter, sidewalks and streetscape improvements from the intersection at US 40, past Ski Idlewild Road to the roundabout. Council also approved Resolution 1707, a cost sharing and reimbursement agreement with developer, Fraser River Development Company (FRDC), to reimburse the cost of engineering and construction of the additional improvements. The town anticipates recovery of the costs from adjacent landowners as their properties are developed.

Council approved Resolution 1705, approving a Sanitary Easement agreement, which includes a Pedestrian Easement; and, Ordinance 522, conveying a parcel of land, per the annexation agreement, to accommodate the sanitary sewer easement and allow FRDC to move forward with the construction of infrastructure and the overall development.

The Town’s Public Works department will also be leasing a temporary site from Fraser River Development Company on the Roam parcel previously occupied by the Grand Adventures operations for a period of 18 months while the new Public Works Facility is built in the existing space. Capital Projects & Parks Manager, Gerry Vernon, told council they had tried to bid out as much as was needed and found that, by totally relocating the Public Works department, it would result in a savings of approximately $1.5 million in facility construction costs due to increased efficiencies. The site will house a large tent, an office trailer and will be fully fenced for the duration of the lease. The town is also leasing one bay for maintenance from Conroy Excavating in Tabernash. Vernon told council the total costs for the temporary site are estimated to total around $451,167. Council approved Resolution 1706, approving the lease agreement with FRDC and Resolution 1708, awarding the bids to establish the temporary Public Works facility.

In other town news…