Jardee explained, “The Town’s current mission statement: ‘To Actively Develop as a Quality Resort Community which Reflects the Beauty of Our Natural Surroundings’. Last year, Town Council directed Staff to create a new mission statement that better reflects the Town. The current mission statement (above) is outdated and states we are a ‘resort community.’” Jardee went on, saying, “Yes, we are considered a ‘resort community,’ however, Council felt we as a Town are more than that. Council wanted the statement to represent an inclusive, welcoming community. When the updated mission statement was presented at this year’s Council retreat, the new Council wanted to encompass the fact that we are also a year-round community. The mission statement presented for Council’s consideration today better represents the community we live in and also ties in with the four visions of our Imagine Winter Park plan; character and culture, global and local connectivity, world class outdoor recreation, and a healthy and thriving environment.”

Clerk Jardee next presented a revised Town Council handbook for consideration. “At the September 1 workshop, Council and Staff went through the revisions to the Town Council Handbook,” said Jardee. “The Handbook was introduced in 2009, and revised in 2012, and now revised again in 2020. The Handbook is meant to be a reference guide to help Council with identifying their roles and responsibilities, and proper procedures, protocols, etc. After the workshop discussion, a few items were added to better assist Council in conducting meetings, navigating electronic platforms as necessary, as well as processes for appointing people to boards, commissions, and committees. The Town Council Handbook is a supplement to the Town Charter and Town Code in aiding Council members, especially new Council members. If Council accepts the revisions of the Handbook, Staff recommends Council adopt the newly revised Town Council Handbook.” The revised handbook was approved unanimously. 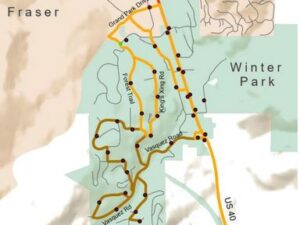 Transit Manager Michael Koch presented the Transit Advisory Committee’s recommended service for the 2020-2021 winter season. Most lines would operate the same as they did in the 2019-2020 winter season, with the exception of the Orange and Brown Lines.

Koch explained that the new alignments proposed are in response to feedback and new information that has been brought to the committee’s attention. The first event that impacts the routing of the Brown and Orange routes is the closing of the railroad crossing located on King’s Crossing Road in Winter Park. Both routes currently utilize that crossing to access US40 and Lion’s Gate Drive. The committee had also listened to riders of the Brown Line and the length of that route (as it is the second longest route behind the Granby Regional Line). Staff took this information into consideration when looking to increase efficiency in service to the west side of Winter Park.

The proposed routing for the Orange Line would see significant changes in its route. Leaving Winter Park Resort, the Orange Line would make its way north through Downtown Winter Park, stopping at all stops through the downtown corridor before making a left turn on Grand Park Drive. The bus would travel up Grand Park Drive after making a stop at the Grand Park Recreation Center stop and turn south onto the new extension of King’s Crossing Road. Following King’s Crossing Road, the bus would continue on to Forest Trail and service the Forest Trail and Tall Pines stops. It would continue on to King’s Crossing Road and turn left to service the stops at Silverado I, Silverado II, Timber Ridge, and Wolf Park. A proposed new stop may be added across the tracks from the existing stop in front of the King’s Crossing Solar Townhomes. The bus would then continue back to Grand Park Drive, turning right, then turn right again on Old Victory Road which leads the bus right onto Lion’s Gate Drive. The route would continue down Lion’s Gate Drive, having the bus service the stops at Trestle Drive and Lion’s Gate Pines, then turn left onto Miller Road. The bus would then turn right onto Main Street and service the stops between Miller Road and Winter Park Resort. Total operating time for this route is estimated at 28 minutes.

The proposed new routing for the Brown Line would have the line leaving Winter Park Resort heading north out of the main entrance, stopping at the Beaver Village Northbound stop. The bus would take a left on Vasquez Road and largely follow a similar route as it has previously. The new routing takes effect after the stop at Pine Cone Lane. The bus would leave this stop and continue to follow Forest Trail around back to Vasquez Road, where it would turn left and return to Main Street. Total operating time for this route is approximately 28 minutes.

Koch added, “The proposed alternatives address the anticipated railroad closure at King’s Crossing Road and help bring more balance to the Brown and Orange Line schedules. This also allows for greater access to the Rec Center stop. Currently the Emerald Line services the stop, but with the new routing, the Orange Line would have a stop at that location as well.”

Assistant Town Manager Alisha Janes presented council with a grant application to the Colorado Department of Local Affairs (DOLA) Energy and Mineral Assistance Fund for their consideration. If approved, the grant funding would be utilized to offset expenses for construction of infrastructure for Phase II of the Town’s Hideaway Junction affordable housing project.

Janes explained the current plans for future phases of Hideaway Junction includes 36 additional lots. Staff had divided those lots into two phases, with the next phase, including the utilities infrastructure for 20 lots on the north side of the development, and the final phase including 16 additional lots immediately south of the existing homes in Hideaway Junction Phase I.

The total cost for the infrastructure for the 20 homes in Phase II is approximately $650,000 which includes sitework, the road base and pavement, water service lines, sanitary sewer lines, gas lines, and conduit for electric and broadband utilities. Road paving and sitework, while part of the overall project is not eligible for grant funding but can be considered as part of the local effort toward the project. The grant application will include a total project request of $600,000 with a local 50% match of $300,000.

Janes told council the application was due by October 1, 2020, and anticipated award announcements in February 2021. Should the project be funded, Staff will issue an RFP for construction of the utilities infrastructure next summer. It is important to note that no housing units will be delivered during the summer of 2021. As the utilities infrastructure project moves forward, Staff would continue to work with Council to pursue the construction of the units in Phase I, with construction occurring no sooner than the summer of 2022.

The Winter Park Town Council meets on the first and third Tuesday of each month at 5:30 pm. The meetings are open to the public. To learn more, visit wpgov.com.