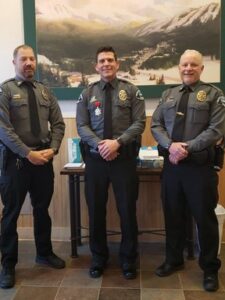 PHOTO: (L-R): Commander Donnie Ransom, Officer Johnny Stensvad and Chief Glen Trainor Photo courtesy of the Fraser Winter Park PD “The Fraser Winter Park Police Department honored and recognized Officer Johnny Stensvad by awarding the department’s Distinguished Service Medal for bravery at the Winter Park Town Council Meeting Tuesday night. On April 13, 2020, Officer Stensvad responded to a structure fire at the Braidwood Condominiums in Winter Park. Officer Stensvad risked his own life by repeatedly entering a burning condominium unit in an attempt to rescue an occupant of the unit. Stensvad did rescue a Golden Retriever from the unit and carried the dog to safety before returning to the fire. Congratulations Officer Stensvad, and thank you for your selfless service to our community!”

At their regular meeting on Tuesday evening, August 18, council unanimously approved Resolution 1798, officially naming the new Public Works building for long-time civic leader, Jim Myers. During his 34 years of service to the Town, Myers held positions as mayor, mayor pro tem, councilor and also served on various boards and committees since the 1970s. He retired from public service in April 2020.

The public works facility is still under construction, but when it opens in early 2021, it will be named the “Jim Myers Public Works Building”, in recognition of Myers’ service and contributions to the town.

Assistant Town Manager Alisha Janes presented the first reading of Ordinance 542, an ordinance which would amend Chapter 10 of the Town Code regarding protection of wildlife and the removal, storage and collection of trash.

Janes explained that recent interactions with wildlife, predominantly bears, was often found to be the result of unsecured trash containers. She had reviewed the code, originally adopted in 2008, and found several conflicts in language related to hours when trash is permitted to be left out for curbside pick-up. The ordinance as presented cleans up the conflict and would allow residents to put trash receptacles out at 6 am on pick-up day, and would require the containers be brought in and stored by 8 pm the same day.

Instead of requiring each resident to utilize a wildlife-proof container, the ordinance would also require the homeowner/tenant to screen the container or store it inside between pick-up days.

The ordinance also addresses bird feeders, which are allowed, and outlines recommended requirements for properly hanging the feeder to dissuade bear access.

Residents found to be in violation of the Code would no longer receive a “warning” and would instead be issued a “notice of violation” with a requirement to obtain a wildlife-proof container from their trash disposal provider.

Town Manager Keith Riesberg brought forth Resolution 1799, a resolution to add a question to the November 3 ballot on legalizing the cultivation, manufacture, distribution or sale of medical and retail marijuana within town limits.

Riesberg explained one of the reasons it had been brought forward was because the Valley Hi Motel property, which is currently an enclave, could be annexed into the town in the next eighteen months. A retail marijuana store is located on the motel property.

Similar to neighboring Fraser, the resolution proposes an additional tax of 5% of marijuana sales, limits the total number of retail licenses to 4, and projects about $240,000 in added revenue per year. As drafted, the revenues would be deposited into the Town’s General Fund.

Councilor Chris Seeman suggested the funds be used for other priorities. Mayor Nick Kutrumbos stressed the council’s priority of health and human services and, after discussion, council decided to direct 50% of the revenue to the general fund and earmark the other 50% to be used for mental health initiatives.

Council approved Resolution 1799, with amended language on the 50/50 split, unanimously.

Assistant Town Manager Alisha Janes presented the Town’s first application for an Accessory Dwelling Unit (ADU) and Deed Restriction. Janes explained that ordinarily the process would work through building, planning and zoning, but since it was the town’s first, she wanted council to view the full process.

Winter Park property owner William MacDonald had submitted the request and plans for a caretaker-type unit to serve as an ADU to house a qualified resident. To qualify for the deed-restricted housing, an individual must work a minimum of 32 hours per week or 1,000 hours per year at a business located in Grand County. Annual verification of continued eligibility will be required to be submitted on April 15 (“Tax Day”).

Janes clarified that this was the first, and the process could be adjusted. She assured the council the structure would go through planning first to ensure code compliance.

Resolution 1800 permits the ADU and authorizes the mayor to sign the Deed Restriction, the first step in the process. The resolution was approved unanimously.

Braidwood Condos to be demolished

At the meeting on Tuesday, September 1, CMC Property Manager Robert Blay introduced Braidwood homeowner and HOA Board Member Doug Moore. Moore gave council an update on the structure, which suffered extensive damage from a fire in April. Moore explained they had just gotten custody of the property three weeks before and had been cleaning up the site since then.

Working with the insurer, American Family, they determined it was best to demolish the building. He added there was debate on whether the elevator shaft could be salvaged and that hygiene testing was being conducted to investigate possible asbestos.

Moore told the council they had received five bids for demolition and were in the process of evaluating the responses to the RFP. Moore said he hoped to have the demolition completed before the snow flies. The bids ranged from 2 weeks to 2 months, with asbestos remediation an unknown. “Our intention is to rebuild it,” said Moore.

Mayor Pro Tem Mike Periolat commended Moore for accomplishing so much in a short time. With extensive insurance experience, Moore was instrumental in moving the project forward “at light speed”.

Mayor Kutrumbos asked Moore to update Town Manager Riesberg when the bid is awarded, due to the level of inquiry received.

Paul Backes and Billi Lewis, of McMahon & Associates, presented the 2019 Financial Audit results to the council.

“Overall things look good,” said Backes, adding, “your financial reporting is solid and your position at the end of 2019 was solid.”

Town Clerk Dani Jardee presented an overview of the Winter Park Resort Competition Center’s upcoming Epic Singletrack XC MTB race. Set for Saturday morning, September 19 and starting/finishing at the Headwaters Center, the race route will utilize the local trail system. Due to a closure on part of the trail, planners were still working out the course details. 125 pro/expert racers and 125 novice/sport racers are expected to participate in the event.

The Headwaters Ecology and Community Center also submitted a request for a Special Event Permit to conduct church services at the outdoor amphitheatre on Sundays from 9:30 – 11 am. The indoor reception hall would serve as back-up in the event of inclement weather. 50-125 attendees are expected at the weekly service.

No public comment was received for either event and the council approved them both unanimously.

Michael Pankratz of Alpine Lake LLC, the new owner of Goody’s, submitted an application for a transfer of a Tavern Liquor License. Pankratz told council he’d just purchased Goody’s about a month ago from the Gulden family. He said he planned to stay open an hour later than previously, with a focus on the apres ski crowd.

Jardee confirmed the application for the transfer was in order, and, hearing no public comment, the Tavern Liquor License transfer was approved unanimously.

Town Manager Riesberg presented Resolution 1801, a resolution approving a ground lease agreement with Grand County for construction and operation of the Lift Transit Facility on the twelve acre parcel.

Riesberg explained the lease agreement would secure the property for a term of fifty years. The town will pay the county $10 per year to lease the property. In addition to this compensation, the Town agrees to provide Grand County a seat on the Transit Advisory Committee (TAC). The parties acknowledged that the TAC is advisory on operations only, has no input to capital expenditures and that the final decisions rest with the Winter Park Town Council.

The town will operate the Transit Facility in accordance with the terms of the Special Use Permit (SUP). The terms also require access to the site be from CR 5103 and not directly from CR 5. The SUP also requires the town to negotiate the potential sharing of services such as a shared fuel-station. Any intergovernmental agreements regarding the sharing of services would be separate agreements from the Ground Lease agreement.

The lease also contains a provision that requires the town and the county to begin negotiating the renewal of the lease at the start of year 45.

Resolution 1801 was approved by council unanimously.

Koch explained, in 2019, the Town received grant funding from the Colorado Department of Transportation (CDOT) for the design of a new transit facility. Town Council approved the grant award allowing Town Staff to move forward with an official RFP process soliciting services from qualified architectural and engineering firms.

Staff began a Request for Proposals (RFP) process in April that included a mandatory pre-bid meeting as part of the process. Eight proposals were received and reviewed by an evaluation committee consisting of; Keith Riesberg, Lizbeth Lemley, Gerry Vernon, James Shockey, and Michael Koch.

Following the interviews, the committee selected OZ Architecture as the strongest candidate for the requirements of the project as stated in the RFP.

Per the contract, the total cost of services provided by OZ Architecture is $830,172.

Koch next presented Resolutions 1803 and 1804 which approve grant agreements with the State of Colorado’s FASTER and Senate Bill 228 grant programs. Each awarded Winter Park Transit with a grant in an amount that covers 80% of the cost of a replacement transit bus ($393,804). Transit Funds would be used to cover the 20% balance. The two new buses would be delivered in Spring 2022. The resolutions were approved unanimously.

Public Works Director Gerry Vernon presented Resolution 1805 to approve a reallocation of 2020 HTA Trail Funds. Vernon explained that Headwaters Trails Alliance (HTA) received a $40k grant from the Town via the Grand Foundation for 2020 Trail Smart Sizing in the Vazquez Trail System near Winter Park. HTA had awarded a contract for the TSS project and the contractor had begun work. Unfortunately, the USFS recently closed the Arapahoe and Roosevelt National Forests in the vicinity of the Williams Fork Fire, thus ceasing all work in these areas.

“To prevent the loss of funds and momentum for other trail projects that HTA had scheduled to complete this year, they are requesting to re-appropriate this year’s TSS funds to perform work in the Phases Trail System near Tabernash.” Vernon noted that, to date, HTA had expended roughly $15k of the $40k grant. He requested the remaining $25k be reallocated to the Phases Project.

Community Development Director James Shockey presented the Final Plat for the Rendezvous Center in Resolution 1806. Shockey said the Final Plat had been approved by the Planning Commission on August 25 with two conditions. He confirmed the two had been resolved prior to that night’s submittal. He said staff recommended approval with the condition the applicant update the final plat per the redlined version from town staff dated August 31, 2020. Council approved the resolution, with one condition, unanimously.

Winter Park Town Council meets the first and third Tuesday of each month at 5:30 pm. To learn more, visit wpgov.com.